Home Archives Profile Subscribe
she's okay!
Down with the Age of Instant Communication

My Brush With The Law

You know how we decided to adopt a child?
We-ell. It turned out that massive thrilling step we took entails many other small tedious bureaucratic ones, amongst  which is the need to get Police Clearance from any country one may have lived in for longer than 6 months. And for some reason in the past I wasn't one to stay at home with my Mammy (although that sounds rather pleasant now). Oh. No. Not. Me. From '89 to '94 I languished in Pavia - which is an ancient university town set into the rice fields on the Lombardy plain in Italy - pretending to be a TEFL teacher to well-dressed Pavesi ladies, but in reality, decorating the local discos on a twice-weekly and semi-professional basis, and going out every other night too to visit the numerous cafes and bars around town. So there's that.
Then there was New Jersey, which was graced with my presence for four years, between 98 and 2003. Lucky, lucky it. That time, I had found my true calling as an animator, and was working in a studio in a seaside town there, run by a nutty millionaire. The studio had been an optician's shop with big shop windows where we'd work away on our drawings, making an unusual window display. Well, after numerous dead-end letters and confusing phone calls I discovered part of my duties in clearing My Good Name was to provide a fingerprint card to the NJ State Police so that they could (presumably) run it through a matching system with all the fingerprints found in unsolved crimes in the States, and try to find a match. One must hope that no such match will be found, for I am an innocent (wo)man! (Irish joke). I was advised that this service could be provided by my local copshop. And so it was I turned myself in last week, after a last, hearty meal with my colleague and friend, GoodFriend L. As I stepped behind the counter in the dusty Victorian institutional building that is the local Garda Station, you know, to where the PRISONERS go, I was surprised by the utter lack of any air of authority or even competence. Oh dear. I mean, they were all perfectly friendly, quite funny, and all that, but the atmosphere was more akin to tea-time at the bowling club, than anything else. It took the poor feller whose job it was to copy out my fairly bog-standard name from my passport quite a bit longer than one might have expected, for instance. And there was a moment of confusion as the young girl who had gripped my fingers one by one and rolled them in ink, sent me back to wash my hands and then looked at the back of the card and had to re-ink them all again. (She looked about 18, seriously. What is that they say about policemen/women getting younger? I feel sorry for her if she has to print all the prisoners who come in to be thrown in the slammer. REAL criminals, as opposed to gently-bred middle-aged women who'd like to adopt a child). The two trips to the bathroom were quite entertaining - we had to skirt the cells. I banged on the doors as I went. No, not really. In fact though it's true the whole experience had the effect of making me slightly giddy and inclined swing between over-deference and hysteria, as the sight of uniformed guards is wont to do, no mad acts were forthcoming. 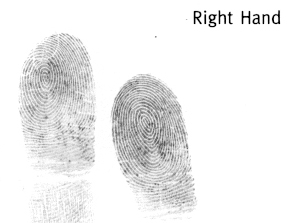 It felt good to do something concrete towards our adoption. Next Italy, and knowing the bureaucracy that the country is famed for, no doubt it will be even funner.