On Christmas Day we all 16 including various cousins and offspring of my sister-in-law-ish, gathered around the table at Brother's house, and shared bonhomie, cheer.. germs. Oh yes! since then everyone has been dropping like flies - all those people who had the poor idea of cuddling the cute baby (really a mass of seething germs) and kissing and hugging each other (I mean really, how unhygenic) have been striken down with some virulent strain of the chunders. Poor JB was up on Friday night, vomiting in projectile fashion at half-hour intervals - meanwhile in WW a similar scene was unfolding, starring my parents, just as in another house, further south, a pair of twins hauled themselves from bathroom to bed in unison.
So we have decided to call off all social events FOREVER, starting NOW.
(I feel like a ticking bomb. So far, so good. Bit of a cold, but no fountains of puke. Fine! Hungry, even.)
In other news, my laptop (a Dell XPS - not to be touched with a bargepole) has started dying again. It seems it has a faulty video card, which overheats and freezes up in an extraordinarily pretty way, like this.

I will be dealing with Dell tomorrow. Quake in your boots Dell. QUAKE.
I am staging my usual review of the year - and am girding my loins for the new one. Lots to look forward to (great artspace idea, cool art projects, work ideas), maybe more work from HugeIrishInstitution (I finished that job by the way):

progress on our adoption, and of course, some things that alarm a bit (fertility assessments and the Unknown), but everything seems fairly manageable.

Just have to steer clear of the relatives.

on the 13 bus on sat night going to the performance a man a few seats in front of us slumped over suddenly and started having a fit I went up to see if to his misfortune I was the most First Aid-knowledgeable person on the bus but I wasn't, there was a nice girl who might have been a nurse, and a competent kind man from Northern Ireland who was saying reassuring things to the man lying vulnerable on the bus floor who turned out to be called Gary, and who recovered soon enough and then an ambulance came and took him to be checked out, all this is a bit of a coincidence because my SortOfCousin Emma from the UK has been recently diagnosed with epilepsy, poor crater, it means she can't drive to work and has had to give up her job although the general consensus is that maybe this will turn out well for her because she hated her job in the library in any case, and now she is keeping up her studies to be a legal secretary, so then the bus moved on and then we were at the show and slid carefully with shoehorns into the Machine, which looked like this: 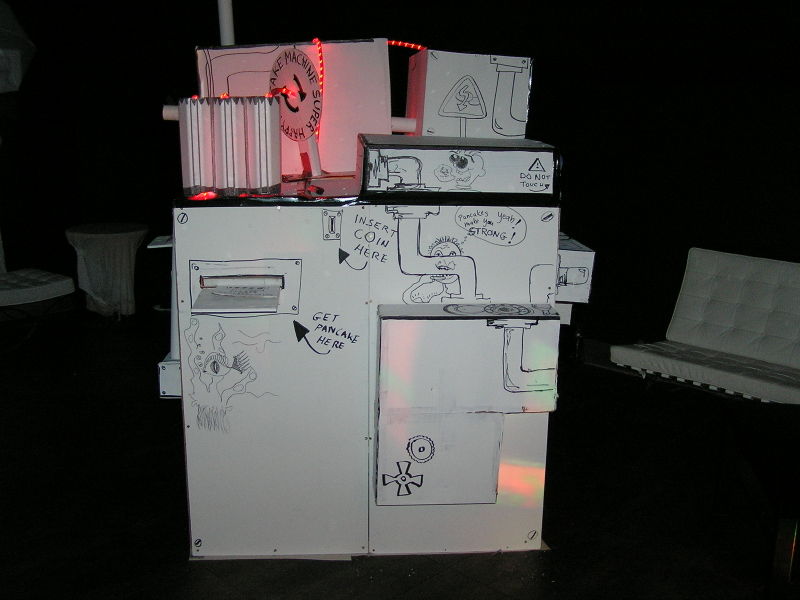 and made some pancakes for people when they dropped coins on our heads, which may have been a design flaw, but it was fun having money rain on us and there were no injuries despite the fact we had an oven in the machine: 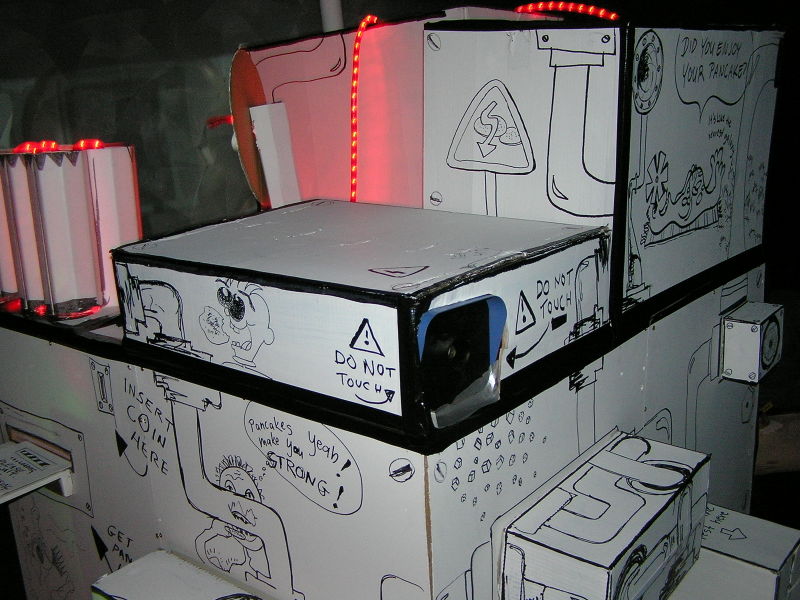 which at one point smoked so badly that the chimneys which were really meant to be purely for ironic show purposes actually did have a functional application, and a man came over to ask us if the smoke alarms would go off and I told him it was only a special effect, which was a lie, sort of, except we did have a smoke machine, but by then we'd taken the smoking thing out of the oven and sure anyway, the security men were gathering around to get pancakes and fortunes, and all the fortunes were happy ones, except the ones that predicted someone might end up as the minister for health, and my artist friends E and I, were great fun, and it was magic to have one of those conversations where you have a "mad" idea and actually turn it into reality, which is what this Machine was, and what I'll remember from this is being in there having a laugh with the sugar on my trousers and everywhere and dusting stencils with vanilla sugar and putting it together in our garret and making a lot of pancakes, and coincidental things that have happened in this strange magic week, like seeing a steam train with its huge plume of smoke pumping over the bridge at Pearse St and then again in Phibsboro yesterday as I drove up and down in my loyal Noddy car moving stuff around, and also on the LUA.S going to the hospital on tues, I was listening to TAL, which was an episode called Heretics, about a minister who re-interpreted the bible and believes that no-one is going to hell, which is so nice, and what a relief and I could much better embrace the idea of religion now everyone is included, and to me it now makes sense when they say that Christ died for us, if that's the case, and then I looked over and the man beside me was reading a text about the very same thing, and wouldn't it be nice, if that was so, and now it's monday again and I have to illustrate 26 signs from the ir*sh sign language and I put that asterisk in because it wouldn't be great to be googled by my employers they would possibly think I am an over-stimulated nervous wreck who has never heard of a nice sit down with a cup of tea, or a full-stop
.

nice work if you can get it

I somehow landed a lovely job, by luck more than anything - to illustrate a story by a Famous Irish Author that was commissioned by the Post Office. It's a nostalgic account of how he would post Christmas cards to his favourite aunt when he was a boy, despite the fact she lived only a few doors away from him in Monkstown, Co Dublin. (A place disappointingly not populated solely by monks, and coincidentally where my mother is from). I am busy indulging myself in fantasies where Famous Author sees my image, is all impressed and asks me to illustrate his children's book.
AHHHhhh. Zzzzzzzzzzz..
Here is one of the roughs, the one I preferred. 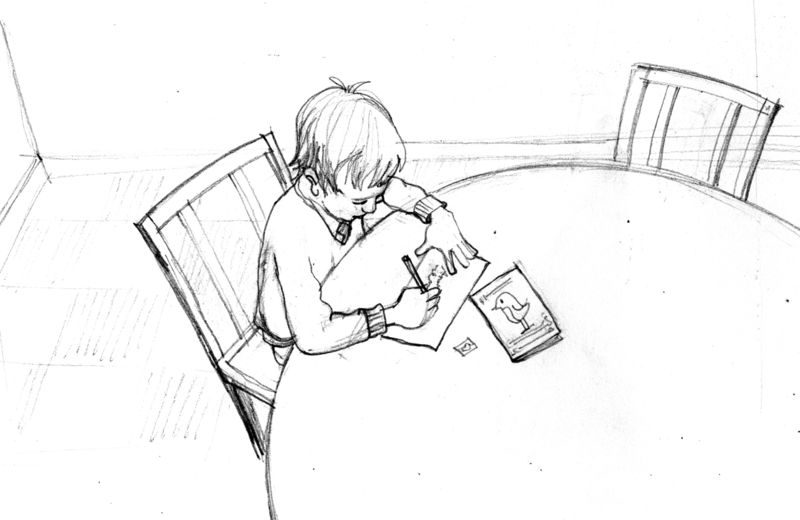