My old friend Anxiety is dogging me again. Some things have happened, it's true. Last week for instance, I took a fertility test, and the results were good. So that would seem to be good, would it not? Then I got an an acceptance of two proposals to a local Arts festival. This was good, too, one would have thought. (The proposals were a bit on the ambitious side. Not exactly sure how we'll pull them off (one is a collaborative project with E, the young one (ooh, parentheses inside parentheses! what an apt metaphor for my confused state of mind)). Then I went to the doc today to complain about my painful Time (as JB likes to refer to the Lady Cycle). I didn't get the answer I expected at all (I had confidently if inexpertly self-diagnosed fibroids) but the doc was so sympathetic I confessed to her all about my family planning situation with JB, and my plans to adopt and my family history and the next thing I knew I had an appointment with her for 2 weeks time, which will be the 21 day of the Lady Cycle, for hormonal blood tests and cholesterol and Heaven knows what. I'll have to be fasting, which I do remember. (The horror!)
Nothing bad there, really. So why the clamped jaw? Why the palpitations?
(Ooh, I just forced a yawn stretch. Had to practically get physio to reeducate my muscles.)
I am worried about Smokey, (Oldest Horse in the World). He seems in good form, and is certainly voraciously (horaciously? I am practising being ParentCorny here, for when I am a parent - see above) hungry, but his "droppings" (what an hilariously euphemistic expression that is. Ooh Smokey, I think you dropped something. Shall I pick it up for you? Oh. Eww.) are not all they might be. Also I was cleaning him up at the weekend, and felt a series of lumps on his tailbone. Lumps are always worrying. Now, as long as he is hungry and not evidently in any pain, there is no immediate panic, I think. But it feels, (in my present state of mind) like a matter of time. I dread getting the vet and making the decision, and witnessing it all. Dread dread dread.
Sigh sigh sigh. I am sighing at my pathetic self. An old horse and having to fast 2 weeks from now.
Do I think it'll kill me?

(This is a drawing from a series I am making to document the recession. This is a queue outside the Social Welfare Office, in Dublin 2): 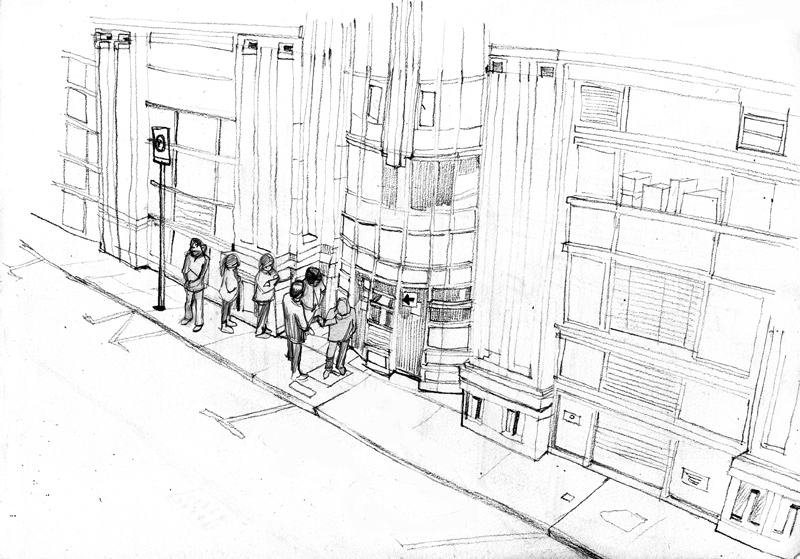 It's been a couple of tough days, even apart from the icy wind and rain. Because, for all that I kept dreaming about being pregnant (ha, subconscious, very funny) and spending hours at night wakeful believing I was and a few more seized by the irrational convinction that yes, I was, but it was ectopic (Thanks, overactive imagination. Good one) I know I am not in fact up any pole. Rather I am left flatfootedly on the ground, pole-less, bun-less, spout-less, looking for a graceful way to go through the tests I now have to face. I've been through this before of course. It has a familiar feel to it. The whole cycle back from grief and disappointment to resignation and finally to hope again is getting faster, if no easier. Here I am, happy enough, back in front of the telly, where yesterday morning I was like a sad robot at my computer. And meantime:
The new President of the US is up there talking bravely and eloquently about what must now be done. The vast crowd is whooping and clapping. He looks small - just one of them, and it makes me concerned he'll be alright. That he can do it.
We have to believe that it is possible, that change is coming. There is no choice but to believe.

Ooh er. I have been away a while, haven't I? And just as with a friend I haven't seen for a month or two, when asked what my news is, all the news factoids about My Fantastic Life crowd madly into my head creating a thought logjam so I can't get anything out at all, and am struck dumb, now I find myself not knowing where to start at all. Which of my many half-baked ideas, plans and experiences should I go with? They are all so equally daft fascinating.
Let's see. Well there's this scrawled note as written on the train back from Kerry today that may inspire a thought or two. I'd been reading Richard Ford (Sportswriter. Really Very Good) as I rocked along, listening to what appears to be a CIE spy behind me who is reporting to HQ on the fact that he was on the 1430 from Cork and there was no trolley service on the train. He wants this to be adjusted. He must be powerful. Because it is. Another man is ringing everyone he knows and asking them in a ringing voice if they have any EXCITING news? He is very interested in excitement. A young fella with Long Hair and Tattoos (shockingly) is sleeping peacefully on the other side of the carriage. Plenty of time to notice all this, the whole journey takes about SIX hours. My friend left for Rhode Island today too, and I would have to bet that she got there before I got home. As you put distance between yourself and Dublin, standards step down drastically till they are officially lighting up  Rinkydinky/Hokey on the Quality of Travel-ometer. On the bus I put my head on the headrest of the seat in front, trying not to groan and concentrating on not being travel-sick. It's warm on the bus and full of Kerrywomen who love their perfume quite a lot. And then you're in the town - the one JB the Huzband comes from. AKA the Remotest Town in Ireland. Or, the Furthest You Could Live from Dublin And Still Be In The Republic of Ireland. It's a dark place, set deeply into a mountain side, subject to horizontal rain and brief slants of sun. A social-welfare town where many of the solidly built terraced houses that line the main streets are occupied by a single elderly person, where there's one good restaurant, one Chinese, (run by people who seem to exist only within the walls of their establishment and have never been glimpsed outside) one called Indian Paddy, a health food shop, an internet cafe and a gallery - these last all run unsurprisingly well by Germans. JB, the Huzband, is from this place and it's in his every pore. He exudes it. He has only to open this mouth and everyone knows. It's both a badge of honour and a handicap. I admit I almost envy that emphatic belonging. I come from a place that no one is really from, a suburb in south Co Dublin you are more likely to aspire to, rather than feel affection for. There's nothing there to be attached to: big unwelcoming gates and steep hills over lovely views, but not much to engage with. No actual people, just big cars, and the occasional rockstar/Formula one driver. Yes, it's true that Remotest Town in Kerry has all the disadvantages of country with all the disadvantages of town, but it's somewhere. For all that I have never suffered the feeling of being judged by my neighbours, or the twitching curtain syndrome, that is because, broadly speaking, people in my home town don't know me and have no particular attachment to me. That's all.

Well. Would you look at that? I've gone and gone off all tangent-like. This was meant to be all about my resolutions for 09, and All My Fantastic Plans. That will have to do for next time, because West Wing Season 6 my own lovely sofa and fireplace await me. Home sweet home.

Oh! BTW, I found a book and released it! It was so ultra-brilliant. I love the brainy liberal NPR-ish sensibility of bookcrossing. GREAT.