one thing at a time

Another week has slipped by.  This is the week that was:
the week the doctor rang, and told me all my blood tests are AOK, including the hormonals. Which is happy-making. Phew. On the other had, I still have to go for a Ultrasound to see if all is in place and no-one has moved the furniture around or changed the decor or anything, in there. It still remains to be seen if there is any male factor involved, but to that niggle, I repeat my mantra: ONE THING AT A TIME which is also my New Year's resolution. (A thing I decided in February when it became apparent that not eating in front of the telly was setting the bar a little too high this year.)
Speaking of a little too high, I am spraying the flippy bits in a flipclock with graffiti artist's paint. All in the name of art, you see, although for the life of me, I can't remember why I thought it was a good idea to take 9 flipclocks, take out the flippy bits and draw on top of them. Why, why? oh why?
Am obviously deluded.
I went to visit Spike and co last weekend. Spike has been throwing crying fits and not wanting to go to Montessori since his friend left to live in Paris. It is hard being 3.
So. In conclusion. It seems that despite my mantra and the title of this very post, I haven't learnt anything. I am skyping E (young artist friend), listening to Sinead O's You do something to me on Youtube and posting this, all at the same time. Three things at a time.
Self, you exhaust me. I am leaving you for another. Hey, they are talking about transplanting larynxes (sp?)  why not a psyche? For this one is decidedly faulty. 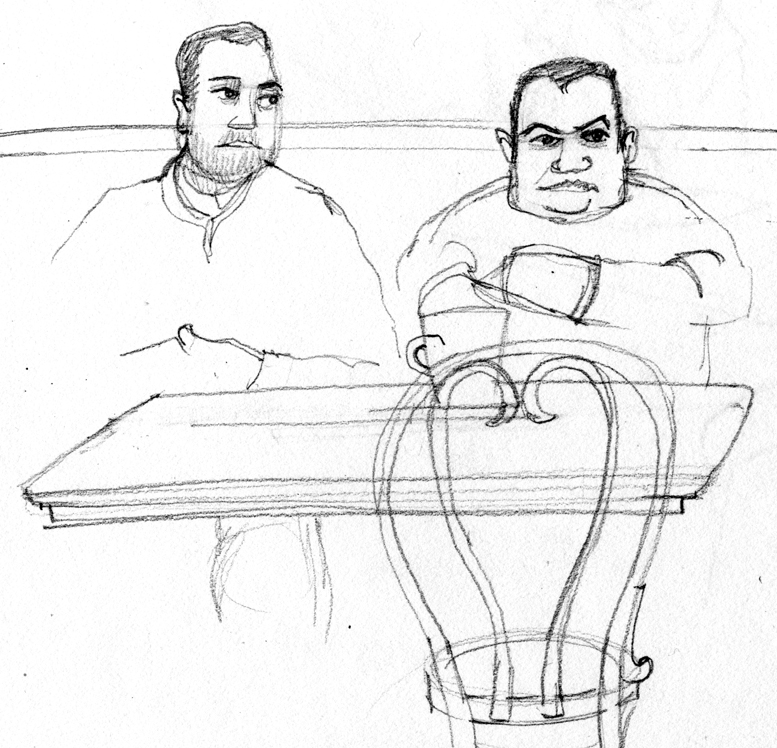 [Some men I drew in the cafe. I wonder if they were gangsters?]

a missive for posterity

----- Original Message ----- From: Twangy's Mother To: twangy@twangyiness.com
Sent: Friday, February 06, 2009 4:56 PM
Subject: snow
Hi T, I'm sure you are not as deep and crisp and even as we are, but it was lovely today with the sun out. I got out your snow suit and snow boots and walked down to the village. It was a tight fit, but I got really warm, (and tired). Smokey seems to be all right with the small amounts of haylage and seems to be less scoury. That ski suit is 22 years old, but still works! Apparently the match is still going ahead as they have underfloor heating, as long as they can get there it'll be grand.
Hope you are keeping warm, I've had enough now, take it away.
love Ma
--------------------------------------------------------------------------------
Lovely Ma
that sounds fun, walking to the village. Bit of bulldog spirit, what? JB is all ready for the match. He is wearing two pairs of trousers and two jumpers. It snowed a little here last night. Our kitchen roof is still all white, but this is because we have no heating on, not because our insulation is any good. Did you get the rest of the wool [insulation] in last week? I am interested to see what difference it will make in "my" wing.
Good news about Smokey, I am sure he loves that stuff. On the other hand, if this is the solution, keeping him well is getting more and more complicated. Talk about molly-coddling!
I will see you tomorrow I think. I am going to try to go to Nora Wickham for glasses on Monday. These ones are making my eyes feel funny. Talk to you then
Love Twangy

in the bleak mid-winter, snoooow on snow 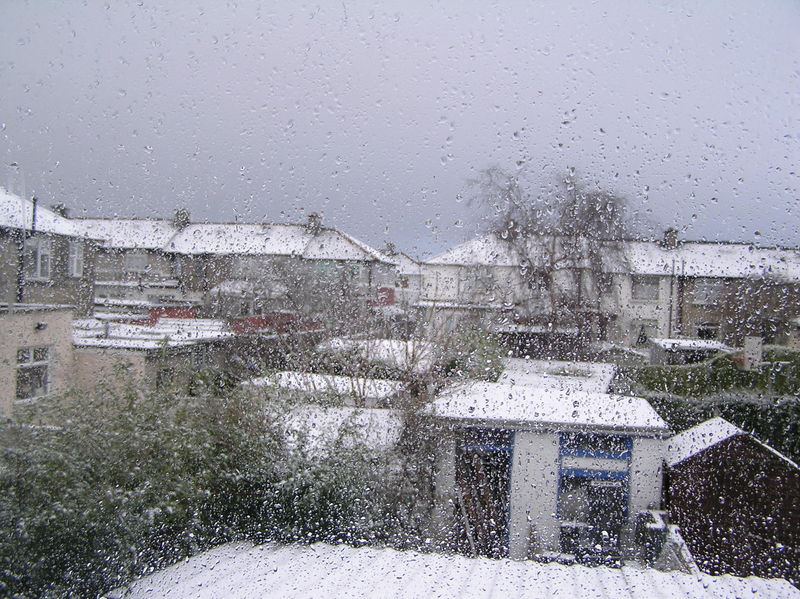 It's snowing. Quite exciting really. We are in thrilling trench mentality, in batten-down-the-hatches mode, even though the snow storm is more of a little Irish-style Shnow Stormeen in a teacup. I dodged world-saving One Dialysis Patient At A Time today on account of (what we like to think of as) the severe weather conditions. The idea of getting up early and slip-sliding down the road to the fogged-up bus full of sleepy commuters and then walking up the wind-swept plain with the wind coming straight off the mountains was enough to strike laziness terror into my heart. Never mind, we'll make it up to them later in the term.
I feel a lot more cheerful. Phew. And hurray! even.
Spike and co were down to visit on Sunday. Spike is a stickler for precision. And he doesn't seem to buy into the idea that there may well be more than one word for anything. So for instance, sheep are not to be referred to as Sheep, but as lambs, to please His Highness. Call a truck a lorry, and you risk being cut off with a bellowing NO! He reminds me of one of those Evil Kings in fairy tales who cuts off his daughter's suitors' heads at the drop of a hat. Was there one I remember that when he asked the young men to describe  what was wrong with his legs, if they dared to say one was shorter than the other, rather than one is longer than the other, he would summarily behead them? Or was that one of my lurid dreams. (Last night I dreamt I got a resounding round of applause for singing that old Beatles song I want to hold your hand. It was really fun. Maybe I have a secret desire to be a big show-off!)
Spike got over all those word-games in any case and turned out to be in a good mood, with much shrieking and jumping and wrestling. Dazzle is lovely - she can pull herself up to standing now, and is tolerant and as sweet as something really sweet like..eh.. a lump of sugar.
Smokey (Oldest Horse In The World) seemed much better than I expected. He seemed so full of energy and so strong that it was easy to dismiss any idea of this being an appropriate end to his life. He seemed not bothered by the snow, just shying and snorting like a youngster at a plastic bag. (A lot of horses have paranoid delusions about plastic bags. Why, no one knows. They are to horses what surveillance devices are to mental patients).
So all is well, for now. And even with that proviso, for now, I am happy and relieved.