how did I get HERE?

I am in Jenners, the delightfully elegant old-fashioned department store in Edinburgh. Yes. [Pinching self]. I really do seem to be. For evidence, there are any number of grey-haired coiffed Edinburgh ladies in here, having a tea and shortbread, in tartan wrappers. There's a strong smell of ammonia coming from the Spa beside, where no doubt the grey hairs have been coiffed.
To think it all goes back to the toss of a coin a year ago in some Rugby authority when it was thus decided that the semi-finalists of the Heineken cup would play the final here in this dramatic and beautiful gothic place. It is truly a funny oul rock and roll world.
So, to pick up the end of the thread that led me here: last Saturday I was in Smith.field, to help Iv with his show, when Brother rang me to tell me our father had had a "turn" and had been hospitalised. He'd taken ages trying to get dressed and couldn't speak properly. Brother said something about a mini-stroke. A few days somehow went by. I looked after the donkey and a half we now have. (Pictures of "Cromwell" to come). Ma seemed flustered (she's not good with hospitals, or sickness, in fact.) and decided to come home on Tuesday. So somehow it was decided that should be the one, (not that I mind, exactly) to come over and oversee things. It's as well I did - my father, though showing flashes of his former self - is shaken to the core. He is not able to talk to the doctors, is frustrated by his speech, and needs someone to advocate for him. It's really strange - he's himself and yet he is not. He stares at you with these big popping blue eyes, as if he finds all this incredible. (But my father has gooseberry green eyes, doesn't he?)
Now we have to make arrangements to bring him home but first he has to have an operation to clear his carotid artery.This is to happen on Monday, allegedly. I say allegedly because the team looking after him is like a benign multi-headed monster, that likes to argue with itself - between the ward doctors and the surgeons, they all have a different idea of what he should do. yes, he needs the operation, and can go home immediately after it with the Irish repatriation service, in an ambulance - no, he can't travel such a long way, but can be discharged to my brother with his car, the day after the operation, to stay close-by. And so on. And so forth.
My head, it is wrecked. Gradually though, I hope a clear story will emerge, because I feel like the Queen, forced to be "entertained" by the winners of Britain's Got. Talent.
I better go. Battery half-gone.
More later. Going to find a random photo because I can't look at Smokey any more. 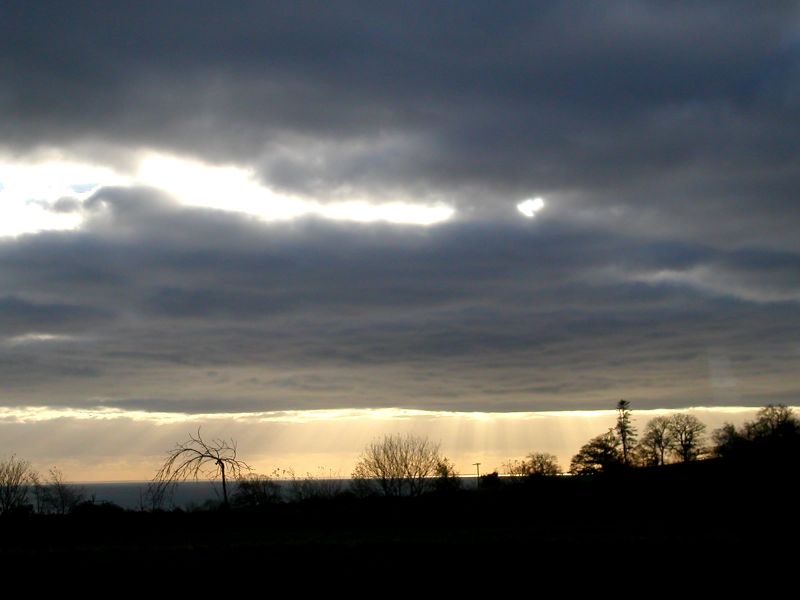 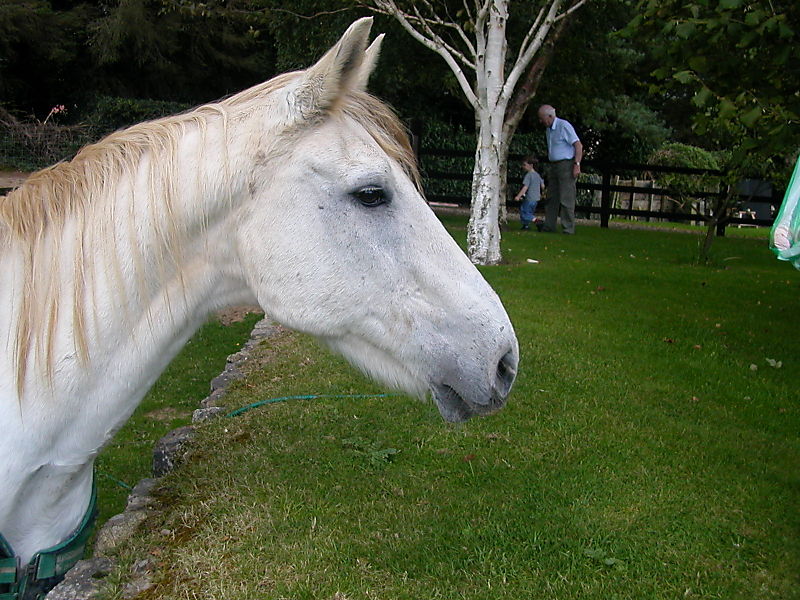 PEACE HAS BROKEN OUT

The Charm and Disarm strategy seems to have done the trick! Hurray for nice-iosity.
I was in the back today in the bright and chilly sunshine, doing some clipping of the jungle and standing on of a snail, (sorry, snail. I did not enjoy the sudden underfoot crunch, and actually gazed at you for a minute after your untimely demise on the paving, (ironically I had just "saved" you from being thrown amongst the rubble) wandering if 1) you could be saved, by cleverly throwing off your shell and becoming a slug or 2) I should put you out of your misery by pouring salt on you and watching you shrivel up), when I was distracted by my neighbour's cordial salute, all friendly-like, from the fence. We had a slightly awkward conversation through the fence. It is not designed for inter-neighbour communication, in truth, the lathes being laid in such a way to be either covering the eyes of the person to whom you are speaking, or the mouth. So I was forced into a kind of solicitous bobbing dance to catch the drift of what Nuala was saying. Which was: they are not going to do anything with the fence - it's fine. And when I tried to apologise for the fact that our extension takes light from their garden, she said "ah sure, it gives us a bit of shelter!" And then, after the ritual complaining about the weather, we smiled cheerily and bobbingly at each other and bid our farewells. I am really happy. I hate to be on bad terms with people, especially those with whom I live so very cheek-by-jowl. Nuala, too, redeemed herself - and will now be characterised in a more favourable light when I write my graphic novel about the neighbourhood - Cheek by Jowl, which was to be a murder mystery with her as the rotten-hearted culprit, and much skulduggery and fleet of foot around of the back lanes at night time (Well. I just made that up, but I think the point is made). It was a stunning transformation and I am a bit pleased with myself, I have to admit. My relief is out of proportion with the reality, because in some deep unlit part of me, I now see I perceive it as some sort of omen. (I wouldn't have thought of myself up till now, as a superstitious person, really, but in fact it seems that I am, really. Might as well admit it. Time to get on with it, in fact. Although I draw the line at joining a coven). I mean, how else to make sense of the way life runs in great loops of bad luck and good? I feel we've been loitering in the dark these last 18 months - I haven't felt my usual doesn't-bear-thinking-about luckiness (Lord this is truly middle-class angst. I do realise. I realise. Apologies to those with Real Problems)  - like:
the 2 penalty points I got for the one and only time I ever answered the mobile while driving (in bumper to bumper traffic too).
See: pregnancy, lack thereof
See: purchase of house the very second before the boom ended
See: being ripped off by builders big time
See also: gratuitous violence done to car x 2, and husband x 1
But now, with our lovely builder, Peter the Great, his beautiful job on my shed, (he wouldn't even take the money for the roof he fixed for us months ago - I mean I had to press the payment on him! extraordinary, it was) and JB's thumbs up from the doctors wrt to his "boys", with the fact my neighbour Came Around, my show which was a success, and the fact we are well, and healthy, and it's Spring, there is so much to celebrate.
JB came back from Kerry, all giddy and rested and back in 15 year old gear. (Whenever he goes home (it is my contention that) he regresses to his teenage years and forgets to bathe and goes around on his bike with his little legs going like pistons.) And we seem to be on a better track, too. I rang the Italian Police for my clearance last week and was told by a kind man with an all but unintelligible (to me) thick Roman accent that it must have been lost and he would send it again. He even asked me to ring him to confirm that it arrived safely) I could just imagine him sitting in a dusty office in Rome, surrounded by metal filing cabinets, planning his pensionable years, with the marble statues outside, keeping their relentless watch.

And so it is that a ray of sunlight slants into my young/old heart. And today is good, and that is enough for me.

There was a bit of a cross-fence showdown last week, chez Twangy. I was working away upstairs on my designs for some flash banners, Thursday, this was, when Peter the Great (our builder) hailed me from downstairs.

Your neighbours don’t like the fence, he says, in his characteristically laconic fashion.

The words hung in the air as I realised my fatal mistake. Drat! Of course, of course! I broke the first rule in the book: ALWAYS DISINGENUOUSLY BUTTER UP THE NEIGHBOURS, WHEN DOING WORK IN THE HOUSE, (even when you have no intention of changing your plans, in the event they are not pleased by the above-mentioned). We were putting a little inoffensive wooden fence over the 3’6” foot wall that is there already to bring it to 5’10”, but the proper channels had not been gone through! We had Failed to Consult.

Nuala (and/or Nellie?) and Larry are in their back garden milling up and down like confused farm animals.

What are you doing here - with this? They declaim, in theatrically bewildered attitude.

Eh. We. Eh. Just wanted to have a little more privacy

And.. I persist.. to put some exocet missiles plants along here -

And thus the dam was unleashed:You better not be having a business there, you know you can’t!We had a big hedge there and we took it down because we couldn’t manage it, and now we’re back to square one! And you took light from us, she says, gesturing to the kitchen extension which is a square metre bigger than it once was. And you didn’t even ask us!
She looks really upset.
But after this emotional outburst, things seemed to improve as the penny dropped that I was not going to put up a fight, and, you know, there was no fight to have. After some reflection, I think it was more the idea of change than any real objection, because they calmed down after some mollification and frequent use of the word “compromise” on my part. (Years of dealing with my father have made me an expert in this stuff. They had no idea who they were dealing with. I am the Queen of Reconciliation. They hadn’t a hope). So I apologised. And made promises to buy them off I mean plamas them pour oil on troubled waters by getting someone to paint their side of the fence/or put up white wire or something. I think the issue might be the maintenance of any plants – I have wracked my brains, and it’s the best I can come up with. Their garden is mostly tarmacked apart from the concession of a narrow strip of flowerbed on one side wherein 2 tulips are permitted to reside. Apart from that, it could easily be a minute doll size car park. It’s as sterile as the moon.

Poor oul things. Actually the husband (who is elderly and frail) was much less excitable, and inclined to say it’d be alright. The wife was the one that might need to Get Out More.
So, yesterday, with some trepidation, I stuck a note in their door, offering to pay for the paint job. A masterstroke in my unhumble opinion (well played me!) for it is thus that I will regain the moral high ground while simultaneously putting the ball in their court, with the added bonus that, now they have calmed down, they might realise: a) we are not so bad. At least we’re quiet b) they overreacted and maybe should be feeling a bit silly c) they’ll have to ring me up and arrange the payment.