We came home after seeing Otros Aires, the tango band, in the NCH the other night (applause, applause! they were GREAT) - the 25th, it must have been, because it was my friend L's birthday, and the day Michael Jackson died, to find my car (aka NoddyCar) with one window rakishly half-open and a shuttlecock hooked onto the aeriel.
I wonder what this can mean. Is it a strange Mafia-like message, like the famous horse's head in the bed? except it would mean - dunno, what? PLAY GENTEEL SPORTS AND VENTILATE YOUR CAR OR ELSE? rather than the more traditional, and, it has to be said, chilling: YOU'VE BEEN WARNED.
NoddyCar was otherwise undamaged in the incident, I am glad to report.

My Da is now in Rehab. (Stroke rehab, that is, not the Amy Wineh.ouse type. It's an ancient institution that used to glory in the inspiring name Hospital for the Incurables.
They didn't really go in for PR in the old days, did they?).
He's in good form. He seems really excited by the visible progress he is making. He is eating - scrambled eggs and porridge - (funnily enough, everything on his most hated list). He went to see the match in a nearby hotel yesterday too, and walking on his frame. Slowly his life is expanding beyond hospital wards.
Isn't it ironic, (doncha think), the way that by the time you get old enough to take your parents to task for making life difficult when you were a child, they've turned into someone else. My Da is now a sweet old man, who looks at you pleadingly with green eyes and likes to laugh at his own silliness. Formerly Angry Da is gone and I feel much closer to him.
He roars with laughter at the incident the other night where he became fixated with getting out of the place and, very logically, (it seemed to him), tried to get out of bed. Not surprisingly, the Escape Plan failed, he fell and the nurses had to come and pick him up.
(Turned out the sleeping pill they gave him can have give you nightmares. Huh, thanks for that, Staff. Considering he never even consented to taking it.)
I was wondering aloud if there was a pool for the patients in the place. Not for Da, interjected Brother, and we laugh. Poor Da was never too hot at swimming, even at the best of times. On one memorable occasion, he nearly drowned while trying to traverse a 6 foot stretch of water. Diane! he said. (Brother likes to act this out), I'm not going to make it! Blub, blub!
I don't know why we find this so funny. But we do.
I must gather myself to go and see the old feller now.
Your daughterly
Twangy

At last, at last, my Dad is on our side of the water. He and Brother were transported by ambulance on Thursday of last week and though the difference to him is probably mostly psychological, to us, it makes a massive difference. Instead of visiting him being a lifestyle choice - the full-immersion Scottish experience complete with foreign accents ("Sit aweee doon there, lassie"), (yes, they speak thusly, and I love it) BnB breakfasts and hospital visits, and rest times spent in the Cameron Toll Shopping Centre, life can go back to a version of normality, and I can visit him by bus in the afternoon, in Hibernian English.
HURRAY!
He is getting better by the day, too, noticeably so. More Da-like every day.
And as if that weren't enough I am now esconsed (if that's the word) in my new shed/studio/outhouse and it's cool. I used to have the robust opinion that it doesn't really matter where you are, you can make art wherever you happen to be, in an plane hangar or a bus stop if needs be, but I tell you, what foolish nonsense! This is great. I have room! I have light! I am all inspired.
I really must make something. As luck would have it, in true feast or famine style, my clocks have been accepted into 2 different shows in July, and as a result of some last minute decisions on the part of a curator, are now double-booked. And since I still have not mastered the art of object-bilocation, (DRAT!) I need to scramble frantically to produce more.
Good! Should keep me off the streets. More on this later..
Your repatriated,
Twangy

Hi Ma
Hope all is well and you are keeping the home fires burning.
We've had some funny times with Flash, as Da calls Lindsay the Wanderer.
We couldn't find Da's glasses (pair One, for Reading) until they were spotted on - you guessed it - Flash. Da says he looms over him in the night which must be a bit disconcerting. Then he goes off and sets off the alarm several times in the night, despite the barricade of seats the nurses set up for him. I feel so sorry for his wife and family because he is totally changed from how he was before - he was/is very intelligent apparently. Now all he wants to do is leave.

So poor Da is a bit tired. Joseph (of the broken neck)is really nice isn't he? I think he really does want to come and play golf - apparently the chosen month is March 2010. He seems really funny (not really sure as I only get 50% of what he says). He thinks I am a great lassie now because I fixed his telly. He is 85 so is entitled to call me a lassie. Everyone is a lassie to him I suppose. Or a laddie. He is great for his age anyway. We were all playing Who wants to be a millionaire tonight. A bit of camaraderie - sure anything to pass the time.
We were a bit fed up when we heard the Escape may not happen on Monday. The referral may not have gone through early enough on Friday. Brother thinks it is still being processed so doubts if they'll get organised for Mon. (But sure what does he know? He only knows about containers ;)) Anyway I reckon I'll stay another night - till Monday eve. Da needs someone to provide a constant supply of clothes and information. We told the nurse he can't have that blue soap and she put a bracelet on him to warn people to use the simple stuff. I think they thought Da didn't want a bath but it was only the soap he objected to. He is very clean, our Da. Hmph!

I'll go now Ma, and have a rest after all that excitement
love
Twangy

A Donkey and a Half

Here they are, the panto act: 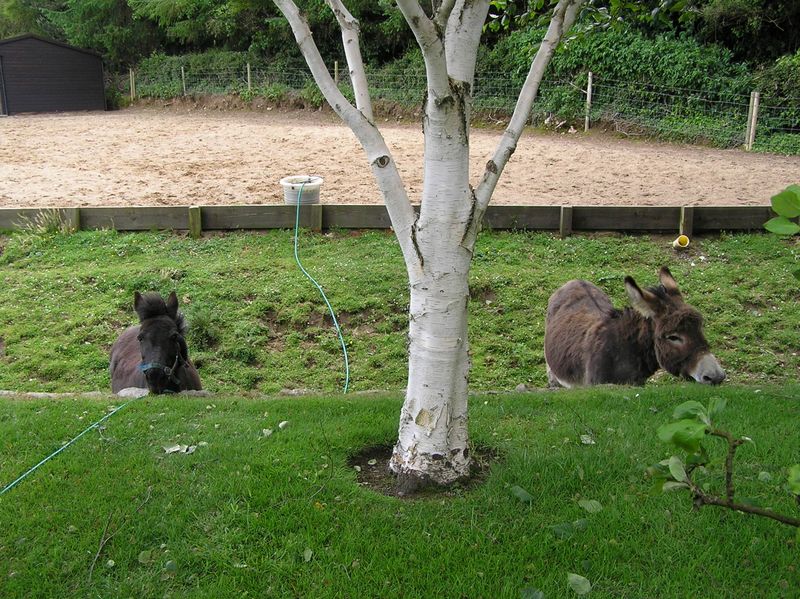 On our left, we have Jenny, the jennet, an aged pony/donkey cross of uncertain temperament who suffers from delusions of grandeur, and on the right, Cromwell, the 100% jack donkey who came to us in response to our call for help when Smokey died. Jenny was lonely. She really likes to have someone to boss around, full-time, and so Cromwell arrived in the back of a Transit van, and loneliness was a thing of the past. Teasing, horsing around and competition for food are however a thing of the present.
'Twas ever thus.

how did I get HERE? Part II

Whoa, as the dudes say. Here I am again, in my parents' house, supervising our currently rather wet Donkey and a Half. I got back from Edinburgh late on Sunday after handing off the Pater to Brother. Brother was good. It's true he is not the best communicator and has a touch of the curmudgeon about him, in some ways, but he is Good in Crisis, and was very kind to Da, using his fatherly skills to help him on with his shoes and sit in his chair. Da was pleased to see us. We brought him for a spin in a wheelchair out to sit in the shade of a conveniently planted tree in the entrance to the hospital. Then I split, feeling hollow, to go back to Dublin on the red-eye Ryan.air flight, and somehow after a strange week at home in Dublin, I am back here now, as if spun off a wildly girating carousel. It's raining steadily and the temperature has plunged by 15 degrees. I can hear thunder, I think. Here I am again, indeed. Ma went the Lothian way last night once more - the hope is that an ambulance will be arranged to repatriate Da (yes, this is the rather dramatic term for it, though it may seem more appropriate for war criminals or recently released POWs) by ambulance sometime next week. And we are getting used to the idea of this stroke. Although a voice in my head still says, as I walk by my father's car, say, or see the vegetables he planted this year: I hope he can drive again. I hope he can garden again. And I realise how much my father is a part of everything here, that he is in every tiny blade of grass on the land, and every scrap of paper in this house. I am so sad that he is unable to walk, or smile or get up, and that he's far from home. I'm sad that he is afraid. And I'm afraid too.
It's quite amazing what people say to you. Of course I know they mean well. I say these things too, or I did. I am going to stop now, and just listen when someone needs to tell me that they are sad that something has happened to someone they love. I am not going to cheer them up with all the wonderful, positive, blessings in disguise. I am just going to bite my lip to keep all my platitudes in, and listen.