I won an award! (Thank you, May. Your encouragement really means a lot to me).

I am shaking my memory vigorously, like a child with a piggy-bank, to see what could possibly be in there that might be of any interest. Seven things seems ambitious, but we'll see.

Oh, here's a thing, though it's not really about me, as such: 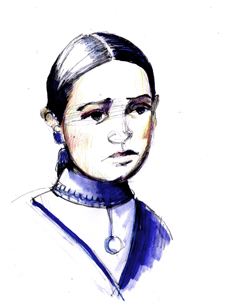 [How I imagine her].

1. My great-great-great-great grandmother was Lithuanian. As far as we know, she arrived here around 1880, presumably fleeing the pogroms, (she was Jewish). I could never quite understand why someone would choose this country above richer, more cosmopolitan places. Lack of choice maybe? But how desperate do you have to be to emigrate to a country that was recovering from a devastating famine only 35 years before?

And then I found a possible answer on the internet:
The refugees, the story has it, were dropped off in Cork at night, by unscrupulous boatmen, who told them that they had reached New York. 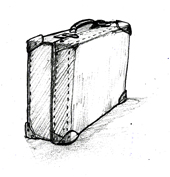 Oh dear. I went on a bit. Tell you what, I'll stagger these, the better for your head not exploding. No 2 coming soon.

o dear, seems that times hardly change in this respect...
Good on you for internetting it.

That's a great story, though, as long as you're not the one who had to live it.

that is amazing. Have you ever been to the Jewish Museum in Dublin?

Every time I get the bus down Harrington St. I say to myself, 'must go there...'.

That made me feel really sad for your g-g-g-g grandmother. I hope the wrong turn turned out for the best!

QoB, that never occurred to me. Sounds really interesting. Must make a point to go.
--
It's such a sad story. But I like to think it worked out for the best - she stuck around, got married, had children. I hope she was happy. Had to be better than Tsarist Russia.