Undisguised, I did go to the follow-up appointment, on my bike, thinking that I'd be distracted by the kamikazee ride there, and arrive panting, glad to be alive (if I was) (hah). I didn't much enjoy being there again, but it wasn't too bad. I must have been in robot mode, because the doctor, after blah blah, I am fine, and can ttc again, said I seemed very detached. So I had to explain to him that my reserved demeanour was a coping mechanism. And he responded that he was glad to hear that, and then something on the lines of it was easier for him if my shutters were down a bit.
Oh.
(?)
He asked what we thought we'd do now, and I mentioned our intention to adopt, and he said:
Oh. Will that work?

Big long silence in which I searched my mind for reasons why your man might have lost his mind. He does know about adoption, doesn't he, I asked myself. That people do it, and so on? Maybe he doesn't get out much? Maybe he lives in the hospital, and is really an android, and sleeps in a freezer at night?
Then, pointing out how he didn't want to turn the screw on me, (Great idea! Don't, then!) he brought up egg donation, and though he wasn't selling it to me, (allegedly), went on to extol its virtues, and how he had delivered a DE baby to a woman who looked like my mother! I looked like a child compared to her!
Oh. That's nice.

By this point, I was bemusedly wondering: Do you know any people, doctor? Human ones? The man works with women in my situation the whole time. Surely to God they react in different ways and have different plans for themselves? And even if they mostly want to have a biological child or carry/birth a child, surely he should not assume that that is always the case?
It nettled me a bit, in any case. I felt somehow as if I hadn't come up with the "right" reaction. BAH. I should have gone in disguise after all, as Maria Callas, maybe, (my symbol of high drama) and wailed like a banshee in the corridor.

It took quite a bit of making fun of him with the JB to make me feel better.
JB: sliding spectacles down nose, puzzling at me over them:
And what is.. a.. dop.. tion?
Me: I. am. a. robot.
And so on.

Doctors, huh. I'll detach them, physically impossible though this may be.
(Is this a thing non-Irish parents say?
As in, when you ask them can you go to the disco: I'll disco-dance you!)

(This retro moment was brought to you courtesy of my 1980's teenage years).

I reckon we should write a book of their clangers. It'd be so good to get the last laugh, don't you think? I could draw cartoons of their Moments of Pure Genius. Hmph.
(Examples welcome). 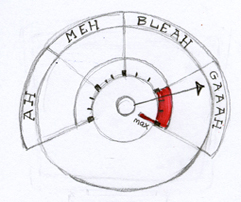 Uh-oh. The mood-o-meter is hovering on semi-hysteria. It has taken me weeks to pluck up the courage to ring the Maternity Hospital of Doom and make my follow-up appointment. The thought alone was enough to make me all quake-y. But today I got a whiff of bravery about me; I rang, and, wouldn't you know it, the secretary wasn't there. Try again tomorrow. Try to actually make appointment. Try to attend appointment. Try not to have palpitations or cry.

My ideas for surviving the return to the scene of the crime, so far:

I am a bit sunburnt. The colour of a raw frankfurter, you could say.

No sooner had I stopped whingeing about needing to get a life, I was spun into a social frenzy. I ate out 5 times last week, if I remember correctly. Various glasses of wine were imbibed in various establishments. It was fun. (Imagine. What a thing.) And The Husband Experiment (thank you for helpful comments) is going better because of that. I continue not to nag (mostly). He continues to rush into the breach with apologies, and plans for dinners and parties. I continue to feel smug.

Ah, and this. I applied for a residency in Florida, that sets you up with a professional graphic novelist, so you can work on your book. This was Quite A Step - I was combing my memory like a compulsive metal-detector on a beach trying to think of narrative work I'd done, and BINGO! I bethought me of this blog and gave the link. Good. But, eek! It's the first time I have connected this to the real life so directly. I feel a bit naked, quite frankly. It's draughty, with your parts all uncovered, I can now report. I mean, it's one thing to show this stuff to my sympathetic and cool IF community friends, but this is another whole different thing.
I would never have done it were it not for your encouragement, and residency or no, I am happy I have. At least I can say I tried, right? I'd be happy if they wrote that on my tombstone.
Here lies TPtheEG, a trier.

Also, a standard poodle complete with show clip, outside the Gate The.atre, (which backs onto the Maternity Hospital of Doom, unfunnily enough). Outlandish, it was. Maybe he or she was coming out of rehearsals, or something. Is there a poodle in Arcadia? 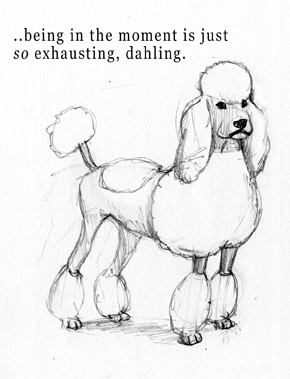 On the Husband Experiment 2010, it seems to have derailed temporarily, but the original idea was to Cease and Desist Nagging. So instead of harping on when the JB comes home from work at 9, I have been all serene, and Hi JB! And it's your life! Because, after all, the complaining doesn't work. He continues to be addicted to work. This worked like a charm for a few days, he'd come in and instead of being defensive would be apologetic! And contrite! It was a breakthrough. I'd cracked it! I was going to write a book!

Sadly though, the serenity wore thin more recently, and the tone of the HI JB. IT'S YOUR LIFE, became slightly bitter and dare I say it, sarcastic, until last night, when I blew a gasket and told him how disappointed I was to find out he was a hypochondriac. (!! UH- OH). (He took it well though, he is good like that. We laughed it off).

Sigh. I feel as if I don't know what I am doing in this marriage thing. What is it supposed to be? I only know what I don't want: my parents' marriage, where one is martyred and one is moody, with intermittent fits of rage. How is it I have lived this long and have no clue of this? Friends, that is easy, I know how to do that. But this remains a mystery. I feel a bit unmoored, as if there's a vacuum where there should be a wise woman or Grandmother to consult.

ps. Still chipping away at the Tome, 6 pages a day. Quite enjoyable so far.. You?

MAD busy again with work (true to the Law of the Freelancer) but wanted to let you know that I have purchased The Tome. (It was not possible to get a copy in the library. That's right, the Central Library, in Dublin, the place Joyce said would be written in his heart when he died, had no copies of the actual book itself. There's enough criticism of the book to sink a battleship. There are listening books aplenty. Some fancy reference copies. But no actual paperbacks available to actually borrow and actually read.)
The JB and I are going to read 6 pages a night with as many silly questions, explanations and simplified retellings of the plot as necessary. (Okay. Wait a minute, so your man is shaving and..) The idea being, if we live to be a ripe old age, we should finish it.
Anyone care to share the status chez vous? And here is a picture of the world.

I've been updating my work site. I would love to post the link, but it can not be so, for fear of creating a trail of evidence that might end in an unveiling of my true identity. I am not so bothered (except! The Parents! Gawd! No!) but the JB would prefer his students did not know about his sperm count, and the like. (It's perfectly normal, student of JB, if you come across this. Since you're so interested. And anyway, shouldn't you be studying?)

I'll be back soon with news on the experiment I am conducting on the JB.
(Evil cackle? well, why not? HEH HEH.)

Back to the drawing board now.
TPtheEG

We went to Kerry and were lucky with the weather: 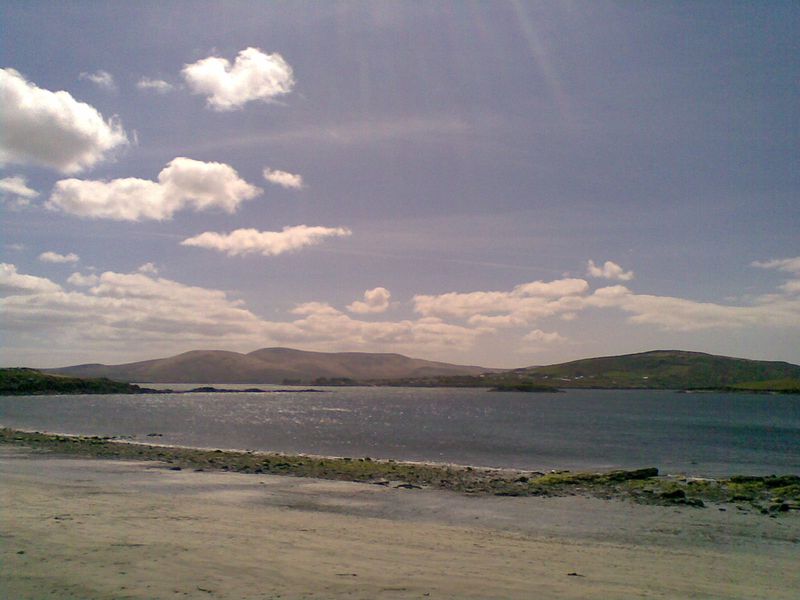 (looking toward Valentia beyond Famous Five-style islands)
and apart from a slight contretemps with the bus on the way home (the driver brought it to a stop in a village to inform us that the back wheel was "on fire". He added that this must be a design fault because it, you know, happens. Oh, fair enough then. Hey ho.) which delayed us an hour or so, all went well. It was fun. We cycled over Valentia and to the above-pictured and imaginatively named White Strand.
(During our wait in the village, I wandered into the shop, where the woman behind the counter gave my burning wheel story such a fantastic reception it went to my head completely. I felt like a stand-up in the 02 arena! It was intoxicating. I was on fire, with my audience of one!)

Now we're back in Dublin, my seedlings are growing, things are good and I am feeling aok and glad to be alive. I'm grand. (In the Irish sense, I mean. I haven't suddenly become landed gentry, sadly.)

Ah, one more thing, before I go. Just so I keep to it, I want to tell you about the plan to (re-?)educate myself, in the hope that my field of reference might one day expand beyond The Simpsons and Enid Blyton. I studied languages in Trinity, back in the mesolithic era, and despite the terrible bout of lazy-ocity that afflicted me, was thus obliged privileged to skim study in depth the likes of Dante and those boyos. The classics in English remain undusted off though. So to speak.

So I've come up with this humdinger to start to fill the gaps, yeah, baby, it's: 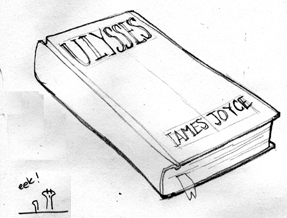 Now, I can't help noticing how well-educated you lot are. No doubt you've been "there". Any advice?
Should I bring supplies? A mining helmet and some marmalade sandwiches? Or maybe I should start with something less weighty? Guidance welcome, as per usual.

I remain your soon-to-be-better-read,
Twangy