This is cheery.
The other night, in between barking coughing fits, I had this fevered dream that I was dying after being in a bus crash. I was not afraid. My dream-self was fine with idea. My last martyred dream-thought:
Maybe it's for the best, eh? The JB can go and have children with someone else.

I woke up all AURGG-ish, feeling hollow and cried punily on the JB, weakly confessing to him about the dream. He told me never to give up, no matter what. And he couldn't have a family with anyone else.
Pause.
Me: Well, you could. It would just be an inferior one.
We laughed pathetically.

The dream left a dismal pall behind it that hung around for days like a bad smell, not helped by the fact I was on house arrest with the hacking cough and odd, vertigo-like sensations. Normally I could dismiss the ramblings of my subconscious, except that, in my dark moments, I can see where it came from. It would be strange, after all, if it never occurred to me that the JB could meet someone else and have plenty of time to have plenty of children.

SIGH.
However. I have to believe that he can make that choice for himself.


This is cheerier.
I got that residency. [!!] Flor-ee-dah, here I come! It is so deeply satisfying to send a sonar ping out into the ocean depths from my lonely submarine and hear a responding ping come back.
That's the best thing about it. There are people out there, and they hear me. 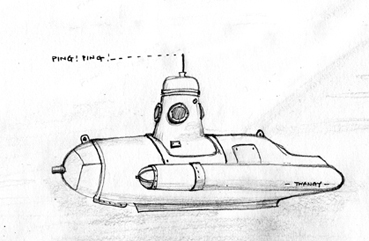 Thank you for your encouragement, so much.
T 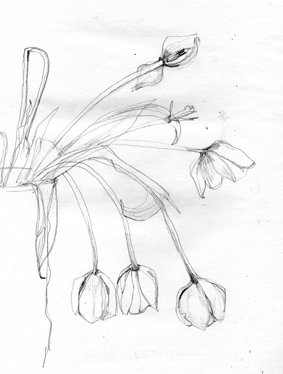 [Party flowers from last week's shindig. I got a metric ton of them, and had to run around the house finding receptacles to put them in, so they wouldn't feel rejected, poor things. I thought using the holder for the toilet brush was a masterstroke, myself.]


I have one of those stinking hot-and-cold colds.

I never get colds. One every year, if that; I am Cold-Repellant at an Olympian level. Well, normally, anyway, which is just as well because my mother confuses this piece of luck with moral fibre. Oh! If only everyone was not so wimpy and a bit more stoic, if they'd only join her in believing vaseline or "letting the air at it" were, between them, a cure for everything, would learn to spell, live at sub-zero temperatures and recycle, then what a world it would be!

The one advantage to the cold: it is the one excuse that works as a Get Me Out Of Jail with my Work Ethic. Now, I wouldn't like you to think I am particularly productive or Heaven help us, creative. Nah. It's that I feel I should be productive and have the feeling all the time that there must be something useful I should be doing. I manage to blugeon this feeling into submission, mostly, and give in to my natural laziness, but the blugeoning, it's tiring, you see.

Yawn. I can't believe I wrote that much about that little. I don't suppose anyone cares to jump into the hole I've just dug for myself too, and tell me she (I don't think any of you are male. Funny, that.) is familiar with this syndrome?

I have ordered this stuff. I am going to make something with it. Oh yes, I am (she wrote, threateningly). Cool! I like this repair statement.

And that is about it.
I hope you are having a pleasant weekend. Anything to share?
T

ps. Memes coming up! Watch out world, interesting things about obscure Irish artist are about to be broadcast! (World politely suppresses a yawn). And things that make me smile - I have been making notes and one of them involves interpretive dance and a Kerryman.
Consider yourselves teased.

A Party
The JB saw fit to invite 8 colleagues over for dinner on Saturday. Pa-NIC. Would they be starved or poisoned chez nous? These seemed the only options to my grim frame of mind. I can make dinner for four or six friendly souls easily enough, but those were 8 work people, and if I killed them, it would be a disaster, I reasoned. The JB would be lonely at work, and I'd be in jail for manslaughter and trying to pervert the course of justice, because the Guards would have found the 8 corpses of the academics (plus ones) in the garden where the JB wouldn't have dug deep enough graves for them, being more used to digging holes for small creatures.

But lo, the people, they came, they did not get poisoned, they made in-groupish (bunny, I learnt something!) academic type jokes, they were plied with wine entertained. I was quite fascinated by one - he said all the right things, and was perfectly polite, but he had not so much a flat affect, as no affect at all. Curious! Like Kevin McAleer, only without the humour.

Previously, on Ulysses
On the tome: we are trudging a bit. Just when you feel like throwing the thing in the fire, you hit a brilliant descriptive part that just flies and you think: Not bad, this Joyce feller. Might catch on yet. Like the bit where he gets up and goes to buy kidneys (bleah) in Dorset st, (which is not far from here) or where they are going to the funeral in the trap - yes! this is easy - but then you hit a part dense with classic and contemporary reference which you'd have to be a lot better educated than I am to appreciate, and the crest falls somewhat. Still, we persist, hoping for a rude bit to come up soon.

Avian Shenanigans
Peace reigns again. The Birds finished their crack suet, and I made the decision not to be an Enabler any longer, and not replace it. All is harmony, as they resign themselves to peanuts and dried mealworms. Eat up, my feathered friends. 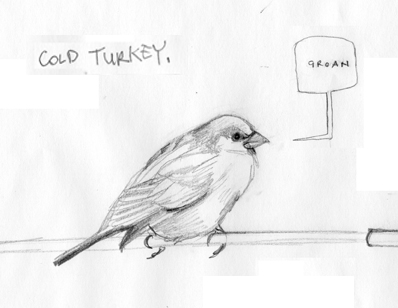 Ig! (New alternative to ug). I wear myself out.

red in tooth and claw

Oh, will you look at that, I haven't posted for an age. I have so much blathering to do, but last week things got a bit hectic. I had a piece of art to finish for a show, for one thing. That seemed to gobble up a lot of time and took a lot of thinking and rethinking and re-rethinking. But it's done. And then..
Then there was the weekend, during which it rained carelessly on top of us. The JB and I visited my parents on Sunday.
[Aside: Do you know, I think my father is still improving (since his stroke of a year ago)? He was telling us stories, about his epic car crash of '75 in which an uninsured and pie-eyed lunatic nearly wrote off his Citroen DS, and how as a youngster he was sent down to spend the summers with his aunt in Offaly, and he really seemed almost his old self, or maybe, in a way, better than that, as this version of Da, the post-stroke one, is a gentler, more boyish one. It did my heart good.]

The birds
Ever since I put out some birdfood (Bird Society Suet. They go ape for the stuff.), the garden has become an improvised theatre for edge-of-your-seat drama. Robin fledgelings line up on the fence, flapping their wings, squeaking vociferously for food from their harassed parents. One parent robin, apparently fed up with the lack of service, (the suet having been scarfed by a rude gang of starlings) entered the house, hopped up the stairs and shat on a towel on the rack in the bathroom in protest. I apologetically opened the window for him/her (equal opportunities at twangy enterprises), and without delay s/he flew in the door of the kitchen below to repeat the process. Occasionally, a couple of fat pigeons (the pretty, country sort) fly ponderously in stage left, to eye the goings-on. Meanwhile, the sparrows are squabbling madly over the peanuts, the bluetits are banging off the window in panic, there's a crowd of starlings on the fence, squawking, and the magpies are perching on the washing line, menacingly, when they are not running back and forth across the shed roof, like witches. Not to mention the dawn chorus, which wakes me at 4am every morning.
Then, this weekend:

The JB was entreated to dispose of the body. (Is this sexist? Men, I mean, having to dispose of dead animals.) He dug a grave in the garden and buried the poor little dead thing, complete with its holey chest. I took the opportunity to ask him if he'd get rid of a (human) body for me. (Obviously I'd have some good reason for murder. My victim would have to be very bad). And he said he would.
Good husband. That is the correct response!

Then he explained that in his opinion, the murder victim (the bird, I mean. Mine is as yet theoretical.) was "unwell" and dropped dead out of the sky, whereupon a magpie or a rat had a "go" at him. (Not really a loss to forensic science, is he, a?)
No, no. 'Twas obviously malice aforethought.

Me nerves are gone!