and all that mighty heart

I had visions before we went to London, that captured me as if enveloped in a golden haze, whiling away the hours drawing in cafes, swanning around Notting Hill and enjoying a joke at the wedding party.
Ha, ha.
HA.

There was no mention in the visions of the wilting temperatures in the apartment we were (kindly! I do mean it) loaned. It was on the top floor and the (frankly mad, or cold-blooded, like geckos?) owners had left the towel racks ON (!) so temperatures were in the body-melting hot to hellfire range. You could cook meringues in the bathroom, if you wanted to. Also (ehem - not to be ungrateful, again) Farringdon tube trains/buses/entire public transport system seemed to be rattling right through the flat, shaking the walls as they went. Not to mention the fact the three bathrooms were being re-tiled and the tiler was coming and going and by the way there's no quiet way to cut a tile. And, slightly exasperating experiences with chronically modest communistic-type cousin, who didn't want to put me out by inviting me to the wedding, and kept leaving me with five minutes to dash across town to the registry office, and the like.

So, you know! Eh. How can I sew this up without seeming like an ungrateful wretch? 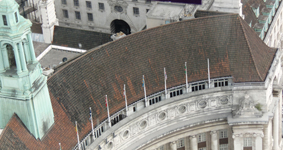 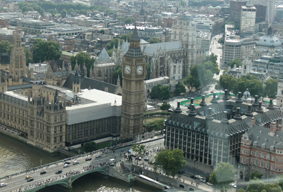 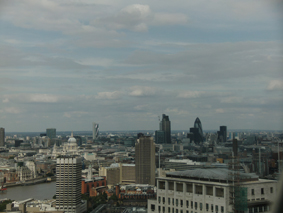 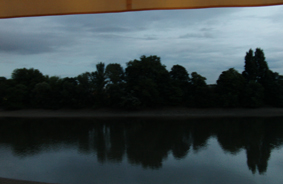 View of Thames from party locale

Time for a sit-down, after all that.

The pictures are beautiful! I'm sorry that the wedding trip was not all that you envisioned, though. I've found that wedding trips end up being more about the other things that you do to fill time than all that wedding nonsense. :)

Ohhh, love the Eye too! AND the bloggysphere! *mops tears in empathy*

Laughing at the accent of your cousin's kiddo. .... Listen to our current PM speak - she's from Adelaide and possess one of the most nasal, bogan voices in the country.

Sounds like a very full visit. And the flat sounds like the ninth circle of hell:) Towel racks ON in wilting weather? Clearly they were experimenting with turning their place into a sauna for that sweaty yoga business. But I'm glad you had a good time otherwise, and I love the pictures.

Eric Estrada. I always knew he had a heart of gold (and, bless you for your CHiPs reference:)

I'm so glad we met! I now read your blog with an Irish accent (probably about as authentic as Nicole Kidman's in Far and Away) and it makes me smile even more than usual 'cause you know, you a lovely fully-rounded person to me now. I hope the flat debarcle hasn't put you off coming again (maybe aim for winter next time).

Mmmm, bathroom meringues! I'll be sure to include those in my Busted Annoying Apartment cookery book, along with radiator scones. Sounds like a lovely, lovely visit.

towel racks can be on? and i thought it was americans who had a gadget for everything.

(aside: i've started using mostly google chrome for my bloggery, so that i can have my real identity open in firefox and not have to log in and out all the time. somehow, your blog does not like me to comment in chrome. will sort it out, but do not feel forgotten. xo)

Boo hiss, chrome! Really, Typepad should fix that. I will create a ticket, or whatever it is you have to do.

aha! perhaps this will last.

You are the BIONIC COMMENTATOR!
Hurray!

Hey!! I am all caught up. Have really enjoyed reading from beginning and having lots to read every time......no pressure or anything!!! We have the same birthday and I also have a bionic nose, I'm sure I was meant to work as a perfume "nose" . So continue, continue.

Oooh, thanks. Encouragement! 'Tis grist to my mill.