..for lack of anything more substantial. I seem to be a bit busy. I have no idea what it is that is making me busy, but there we have it.

Work, I suppose, would be the thing now.
Till later, all.
T

I think I am losing the power of language. The other day I had to ask the JB what "armistice" was. I kind of thought I knew, but at the same time, I couldn't think what it was. I keep saying disc when want to say dish. On May's blog a few weeks ago I wrote "[...] doesn't sound exactly like a rosebed", and didn't realise that what I wanted to say was "a bed of roses" until the penny dropped on the bus, an hour later. Vibrations may have stimulated my brain cells, who knows? I should possibly take up residence on Dublin Bus, permanently, so I can be a functional adult. After all these years freelancing, it seems the birds have come home to roost (Is that the expression? Not the birds, the pigeons? The chickens? What is it? IS IT THE CHICKENS?) I am now seeing the truth of this Oatmeal comic.
That's me. I have lost the power of language due to solitude, and am now reverting to cave-woman grunts, like Tarzan when he is communicating with Cheetah. Don't say you haven't been warned. Unk!

And that is why I find myself waving pieces of pink meat at a neighbourhood cat in an attempt to seduce him into a convenient for all rent-a-cat arrangement, whenever he passes through the garden. I am more familiar with dogs, but have been gamely making the pish-wish noises that we humans use to encourage cats to approach us, in an effort to make him (or her. Who knows.) consider my proposal. Thus far the cat is highly suspicious, acting as if I want to roast him on an open fire, and despite gobbling the slices of the JB's crumbed ham I have been leaving out for him, has only lowered his guard a millimetre at best:

Of course, I can't blame him. I would scarper too, if a middle-aged woman followed me, crying plaintively: ..but I just want to pet you!
More on this story of unrequited love later.

I have been asked if I can babysit next weekend, for Spike and Daisy, (nephew and niece) and their cousins (1 year and 2.5 years old - the London ones), while their parents go out for a BIG piss-up fulfill a family obligation.
Does that sound like a lot for one person? Four under five-ish, two of whom don't even know me, poor little blighters, though allegedly they have been Gina Ford-ed and are Amazing Sleepers, and no doubt there will be a getting to know you session beforehand. Spike and Dazz are complete lunatics quite energetic, but they are raving dolally nuts lively little people who know me, so that isn't so much of a problem. But what will happen if they all start crying at once? What then? What?
Words fail me.
T

ps. thanks very much for your wisdom on pensions and so on. You know stuff, I tell you. And so, action is being taken! Poverty is to be narrowly avoided (or so I hope). Plans are in place (sort of). And the distant possibility of a job (gasp!) may indeed loom on the horizon.

I am down to my last million, here.
I have found a rich new source of anxiety for when I wake up at Gloomytime (4AM). Bills - both Very High Insurance (VHI) - and a shortfall from the Torture Chamber Physio, that I believed was covered by the insurance, but wasn't ("pre-existing condition" - my foot! Or shoulder, in this case)  - plus expenses relating to the Residency (Art Camp, as I have come to think of it) have charged at my account like a herd of rhino and made a big hole therein. Bit worrying, this.

[A jam sandwich I had lying around. Bread, geddit?]

Did you see that Newsnight Special on retirement? (Don't feel left out, people not from these islands. You can easily imagine.) Oh, man. If normal, employed Generation X people won't be able to retire until they are in their mid-seventies, what is to become of the fringey under-employed types like me? We are paying for today's pensioners, (quite rightly, obviously) as the panel pointed out, but that doesn't mean we will be provided for ourselves. The only thing worse than being Gen X, as far as I could see, is being Y. Oh! That's you lot, isn't it? Uh-oh! Lucky you're all such high-achievers, with Proper Careers. You may breathe a sigh of relief.

I am envisioning a future where TPtheEG, the ancient, arthritic version, gets up at 5am every morning to walk out to the DIY superstore in some out of town megamall where she labours painfully all day at stacking shelves for a few paltry shillings, cursing her younger self colourfully as she goes, for being a profligate fool who never saved or had a pension.
(Serious question: is there any point even having a pension? Or are they all devalued and worth shit? Opinions? Explain as if to a five year old.)

As if that wasn't enough, it's tax time, wouldn't you know, which means, as a self-employed person, I must confront the poor financial situation of 2009. It's all there in black and white, dammit. And it was not a good year. Sigh. And I haven't even got on to Peak Oil. Another popular Gloomytime subject! That I'll leave for another day. You may breathe a (second) sigh of relief.


One more thing:
I bought these ovulation tests a few months ago, not realising they only work with the relevant Blearclue contraption until after I took the cellophane off. They are otherwise untouched, and if someone (anyone? please?) has splashed out on the monitor, and would therefore have a use for them, I would be very happy to be get shot of the silly things. Let me know, and I will post them wherever, very happily. Every time I open my beside locker drawer they mock me: 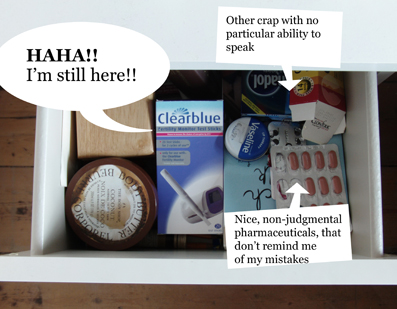 PLEASE SAVE ME FROM THIS.

First of all thanks for your helpful and kindly comments on therapy, the having thereof. It's a relief to have leads to follow, somewhere to go when the shutters come down again as they invariably do and will. For now, funnily enough, I am feeling pretty well. In fact, in a fine example of whitecoat syndrome, in the last few days I have most remarkably come-on-and-got-happy. Isn't that always the way? Last week, there truly was floundering in the doldrums, but this, this is SHINY HAPPY WEEK. Of course, I am not really a complex personality, more - eh - simplex - easily contented, (easily amused, some would say). All it takes is a piece of paper with PTO written on both sides and I am happy for hours. Alright, not quite. But yes, in a way! Mild bi-polarism, serotonin, sufficient Vitamin D and sunlight, peaks and troughs, who knows, but I am feeling strangely fine. (Both states of mind believe they are the real one, that's the strange thing. Ever read Surrender the Pink? The protagonist called her moods Pam and Roy, if I remember correctly. I like that. What would you call your moods? Trevor and Rodney, I am going with.)
I completely love this back to schoolish time of year, the chill in the air, the golden light. This morning all the local children were walked down the road to school in their new blue sweatshirts. I was one of those strange youngsters who liked school so the bustle of new books, new pencils, new shoes, new geometry set - what could be better than that? Nothing. 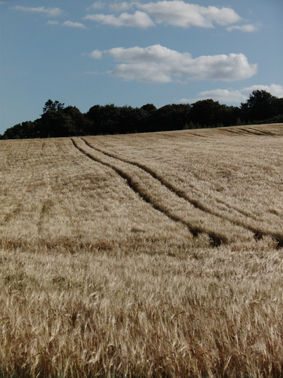 The work, she is going well. I am in a purple patch - also known as Whheeee! I can fly! Smokey, the film, is taking shape. Yes, these are streets and roads, not horses. It will all make sense one day. Just trust me on this one: 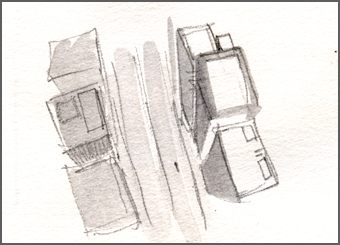 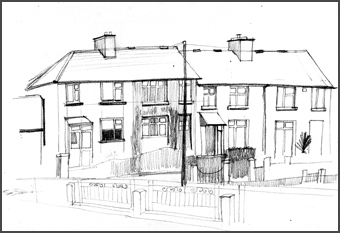 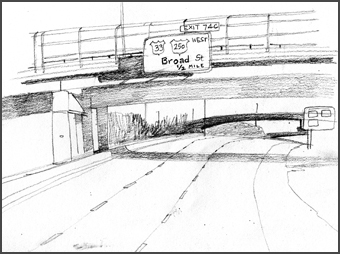 Anyone else finds this a bit unusual? Steady on there Horsebox, I LIKE  MY HOUSE too, but I mean really, WHOA.

NO TITTERING IN THE CHEAP SEATS
but I am doing this couch to 5K thing. It's really really not that bad! Honestly, I swear. So beautifully simple. You just jog and walk for 20 mins. Admittedly I have been stuck on the same week for weeks, but still! That is allowed.
Don't you think?