However, as so often in life, (stay with me here, I am going allegorical) you look for an armadillo and you get a 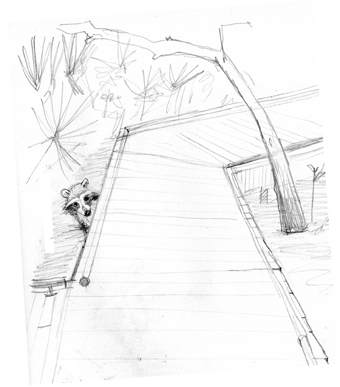 raccoon. Such a startling, delightful thing it was to see that humanoid little face with beedy eyes peering fearlessly through the gloom. (Don't worry, I know I am not to "confront or feed" the wild animals).

I am realising, all over again, the wonder that is the USA for an immigrant like me - one brought up in a raincloud in the strictly monocultural, somewhat parochial and economically depressed Dublin of the 1980's. America! Its vastness, its devotion to fun, its opportunities, its hospitality, its promise.

And yet, and yet. I like my terraced house on my sodden island with its tame climate, the banter with the strangers, the way people know each other, the closeness of family, the green fields. I am fond, as one is of a curmudgeonly grandfather, of Dublin. The human scale of our city, my utter familiarity with it, the personal map of memories laid over it. Many ghosts of times past hang around street corners - I attended our 1996 Christmas party in that hotel with those people, the day my apartment got flooded R and I had a gin and tonic in that bar, I loaded the car in my ex-boyfriend's carpark there, Spike goes to school up that street, and so on, and on.

After years of lusting after a Green Card, applying faithfully every year for the lottery, I gave up, returned to the ould sod, met the JB, and got married. I was 36. Oddly enough, though a Kerryman to the innermost marrow, the JB has in his possession an American passport. Well played, Life. Now I don't need a Green Card, I have one because of him, and also because of him, I don't want one.


Care to tell where you dream of living?
T

Thanks for your interest in the comic. I think I'll start a webcomic site where I can publish things like it, in my own name (I was not christened Twangy Pearl. Shocked?), away from all this necessarily anonymous stuff. Hmm. More on this later.

The USA! Full of Good! Full of Bad! Hard to decide which wins!

OH! SO SWEET! I actually saw two raccoons climbing up a tree a few feet from my window last week. They were so very charming!

I dream of living in a country cottage somewhere in England. Sorry Ireland! Somewhere with a village green with sheep grazing on it. And a vicar. Do such places exist?

Oh, yes. They exist alright, do they what. Probably more in England, if it's vicars you're after. (So to speak). Though in Ireland there are such outposts, too.

You could listen to The Archers while you dream. And The Vicar of Dibley? Don't know if that has infiltrated your shores.

Not Morocco! In fact I am never leaving the western world again.

Can you die of dysentery?

But back to you. Would love to see your comic site.

I think you absolutely must start a website with your comics on it. I will be your faithful reader. If there was something I could do to assist, I would.

I dream of living in a stone cottage in rural France. Must have fireplace. The CHEESE! The WINE! Or Italy. Or perhaps Dorset.

AH! The Vicar of Dibley. We do have that here. Random amusement.

I would love to live in Ireland or Italy (as they are the only 2 foreign locales I've visited - well, I've also been to Canada), but, unfortunately, their heating and cooling systems are not up to my exacting standards. I can't really take the damp of Ireland, and my allergies are awful in Italy. So, I guess I'll stay here in the US, probably in the Midwest. I love my hometown of Chicago, but I don't really want to deal with the traffic. Sigh. I think I want a deserted island today, preferably with temperatures in the mid 80s during the day, and mid 60s at night.

Raccoons - a pestilence! They ate the baby robins in my pine tree a few years ago, so we had the village code enforcement officer come and trap the things. The only thing worse are possums.

Lovely post, Twangy. It's funny where life leads you but the strange thing about it is that - often if not always - it has a way of working out exactly as it should. That's funny about your Kerryman and his passport. See? Karma. Serendipity. Whatever it is, thank goodness for it.

I'm glad you've had a good time in my native land. Raccoons are quite something, capable of chewing through trashbins and feasting on all kinds of delights... and you're absolutely right about their humanoid faces. Not to mention their hand-paws!

Somewhere with socialized medicine that pays for my ART? Never mind I'm going in the opposite direction...

Someplace cool and green would be quite a welcome site to me right now.
...and I absolutely LOVE your greencard story. Fate is a funny bugger....