Time marches along, does it not? I am a bit fried, what with being all busy and so on. And so, I have picked a fragrant nosegay of recent events to tell you about. Let us not expect any cohesion, logic, or sense in the following but proceed bravely nonetheless:

(Oh yes, Andie wanted to know about the process. This 6 part adoption preparation course is a mandatory part of the approval process in Ireland. After this, we'll have our home assessments with the social worker, and should be given our declaration after that, presuming we don't turn out to be KRAY-zee or prove to keep a family of electric eels in the bath. Onward then to an agency that deals with our country of choice. Not sure as of yet which it will be. Someone mentioned the requirement to spend around a month abroad (in the case of Mexico) getting to know your child. Good idea, eh? And what an adventure. I used to speak reasonably okay-ish Spanish, until Italian took over and turned the Spanish into something akin to a bastardised Argentinian dialect. In the landfill that is my mind, a sludgey layer of decomposing Italian covers the rusty old corrugated iron sheet that is my Spanish. But I feel confident with a bit of effort and the vigorous application of language tapes

(Oh. Lightbulb! I suppose they have Spanish MP3s now, the young people. ) it can be dusted off.

So! Sorry about the slight interruption in transmission - I was temporarily dumbfounded by all the tampon talk. How to follow that? Also, new departures have been keeping me off the streets. My friend (Sister 1), and I are working on an online business. Business! This seems most unlikely for me, and yet, it is surprising how much fun I am having with it. Apparently this is what hunger can do for you! More on this later. 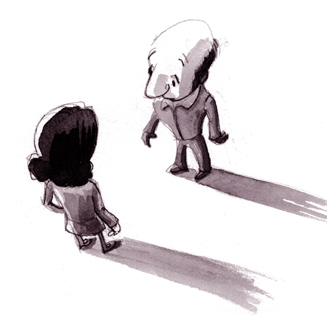 Work on comics ticks along in the background. I am thrilled by these opening doors - I feel so grateful to the residency for lighting this fire inside me. I intend to have all this in place and producing funds before the arrival of our child.

Hear that fightin' talk? True, it is impossible to predict how long that might be, but I am buying wholesale into the notion that you must act as if (Is that an AA culture thing, btw?)- you have to believe it's going to happen. So it will. Mamby-pamby won't cut it, to summarise the philosophy in my own more prosaic way. Which brings me to last Friday, which saw us nervously taking our places in a circle of padded seats, for the first meeting of our adoption group. It was led by a social worker, and a facilitator who is an adoptive parent herself. They were lovely! And human! I had feared a version of my severe Home Economics teacher, and talk of vitamins, spaghetti bol-gon-ase  and car seats, or something, but no. It was really, really good. Even the ice-breaking exercises and introductions, usually a bit nerve-wracking for me, were absolutely fine. Fun, even.

We set all sorts of guidelines about making it a confidential and safe space for everyone, so obviously I am not going to describe anyone, or quote anyone, but they were all heartbreakingly vulnerable and kindly people. Many, of course, are Our People. People I can already imagine will be real friends. We have already did a good deal of nodding vigorously at the reports of Things Fertile People Say, (like, someone advising one comrade that having a family was just a matter of a bottle of wine on a Friday night. Which is presumably the Irish equivalent of "Just relax", apart from being extraordinarily annoying and ignorant.) and respectfully listened to another member of the group confiding in us about their infertility.

It did my heart good to be surrounded by them, projections of our own wounded selves and yet, brilliantly different and perfectly themselves.

a study in inter-continental diversity

Bunny, WFI, readers, people who have inadvertently landed on this site, through no fault of their own,

Never, never let it be said that I can't be distracted easily I will leave any stone unturned in my endeavour to further international understanding: 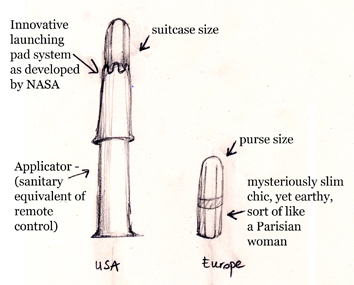 I hope we can all move forward together now, in an atmosphere of cooperation and mutual acceptance.

No other news. It's still raining and I am still a hothouse flower. Lovely, warm Florida sun and lovely, talented comic campers, where are you now? It all seems like a wonderful dream to me now.
But - to the comics! I must keep the dream aliiiiiive!
Till later
T 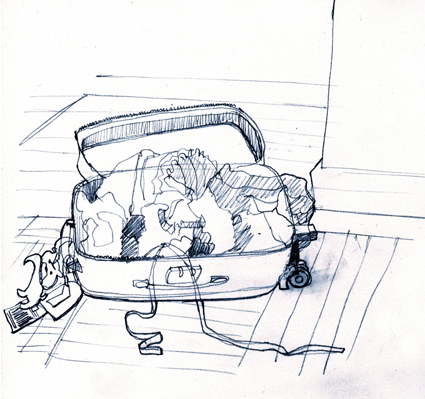 I don't know why I like travelling so much. It's a bit upsetting, don't you think? Yes, stimulating and novel,
but it makes me feel slightly unravelled, as if all my personality consists of is a set of routines, without which I feel a bit undone. So, as you might imagine, what with the unravelling, it's quite good to be home. A bit anti-climactic, but fine. I feel as if I have been flung exhausted off a massive carousel of inky fun. You know, I am not sure if community life is really me. I am better at relating one to one, I get overstimulated easily and 30 is a large group, if you want to be all meaningful and stuff, like I apparently do. It's astonishing how quickly you can become institutionalised, placated by the regular provision of meals (such luxury) and the same faces and comic conversations. Days went by where we didn't even step off the compound, and when we did, it was a bit of a shock to see other (non-comics) people. People who don't make comics! Who ever heard of such a thing? In fact the JB looks a bit funny to me too. And our house. Was it always like that? It looks shrunken.

The last few days at Camp were very celebratory. There was a lot of clapping and yay-ing, a thing I find hard to
participate in without feeling a bit phoney. Oh, you're from Yurp, the Campers said, good-naturedly (they were so bright and nice), with your long addresses/low water pressure/funny looking tampons. I don't think Irish people feel all that European. I don't, but Heaven knows I am a bit odd. Do we, other Irish people? How about you, British contingent? Dutch people/person, do you? It seems to me we are our own thing, on the Edge of the World,  to the west of our cousin islands, and far beyond these lies something we call The Continent. The next parish, which we refer to generically as America, is off to the west somewhere. But the clapping makes me feel quite European - from an old, sardonic place.

So here I am, with a ton more facebook friends, and a half-boiled plan to take over the world by the power of comics, involving an online story to be told in installments and updated at least (!) twice a week. We have a forum with our master artist, we have our book which we are going to publish online. (Thank you for the encouragement with that). So there are plans afoot. Not to mention, later in the week we start our adoption preparation course.

That's it. Except, can I just say, it's cold and wet here. The shower is rilly weak and the tampons are totally weird.