Thank you for all the very understanding comments on the subject of JB's Dad. He's still in hospital, but he is gradually improving, it seems. It's odd, but there's been no sign of a TIA or bleed in his brain that could explain the confusion, and they seem to have ruled out sudden onset dementia and suchlike. So it's hard to predict how much he'll improve. In the meantime, Brother-in-law (he of the non-trembling Bolshoi fame) is coming home for a week to help. So that is nice. Well done, Non-Trembling One. I am suspending complaints and moaning about him, until further annoyance.

It's been a funny old Rock 'n' Roll week. I've been doing research into sending countries, and talking to adoptive parents. It makes everything feel much more concrete, especially when you can hear the Actual Children in the background, unselfconsciously about their toddler business.
!
It's quite awe-inspiring. We've been casting about in a disordered fashion trying to narrow down the options available to a workable list of countries. (We have to have two proposed countries for the social worker). It's so strange. As you flail about, anything can seem like a sign, like for instance a very nice Indian pharmacist gave me a cup of water to help me swallow my pills and I found myself thinking that must mean we are meant to adopt from India. Or not, who knows. And then I started talking to two familes who adopted from Florida, and it did seem to be a bit less random. It makes more sense in many ways - language, culture, (an excuse to make pumpkin pie! 4th of July parties! And ehem, of course, other much more weighty cultural considerations, which I can't quite recall now), it's all more familiar. Affinity, we have it! And, the JB has a US passport, so we could go over there to visit and even live fairly easily. We have lovely friends there, (Watch out American readers. We may be landing on your doorstep. You have been warned.) and as you may not appreciate I have been making a intense televisual study of your culture for my entire life. Ehem! And, I lived there for four years.

So that slowly emerging picture has been positive.

That said, I feel unbelievably hormonal and out of whack these days. Who knows why the hell (I tested, not that)? I even had the most ridiculous argument ever with the JB last night, about my will. It doesn't even matter! I'll be gone! WHO CARES. Oh, who cares.

I'm just on the fritz, as opposed to on the Ritz. On the blink, not in the pink. 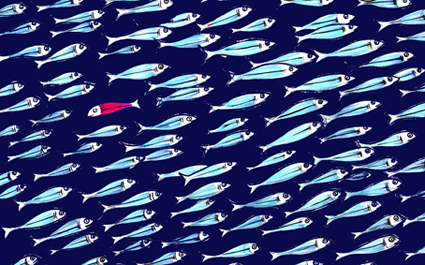 TURN BACK, self! You're going the wrong way! 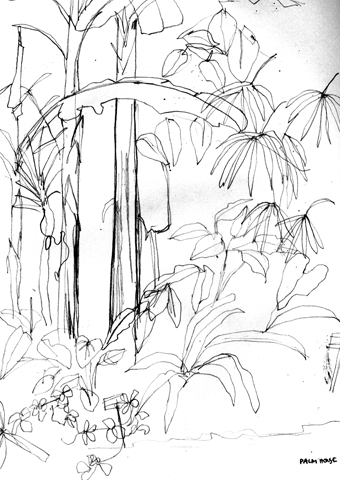 (Messy drwg of the Palm House in the Botanic Gardens.)

I've been on my own for a week - never what you could call ideal for me. Leave me on my own for a few days, and next thing you know, I am apologising to spiders for disturbing them and forgetting how to converse with my own kind, the  hooomans. A truly feral Twangy cannot be far off, so here, let me practise my words.

Last weekend, the JB took the bus, the tram, the train, another 1950's style train and another bus home to Kerry - (you know those jaggy craggy foot-like bits at the south west corner of Ireland? That is Kerry. Also known as the Edge of the World.)

His father, who lives on his own, had upped and confessed that his knee had been bothering him since Christmas and due to its weakness, he'd been falling nearly every week since then, including one spectacular fall backwards down the wooden stairs which amazingly did not injure him. The JB hoped that with inflammatories and bedrest as facilitated by him, the Good Son, his father might recover enough to be able to continue to live on his own.

But when he got there, the outlook was much worse than that. It transpired that his father has been falling out of bed, too, and one night even spent most of the night on the floor, unable to get up. He seemed confused and even, at moments, hallucinatory (he was seeing angels at one point) so the doctor, being a doctor, not a priest, decided to send him off to the Big(gish) Hospital on the far side of the county to give him a CAT scan, and physio, and adjust his meds. He has congestive heart failure and a dicky valve, too.

Poor man.
And poor JB. It's one of life's cruelest tricks, isn't it, to see someone you love in pain, and not be able to take the pain away. Two years on, at the drop of a hat I can relive exactly how it was two years ago with my own father, when he had a stroke while on a trip to Edinburgh. (All my years of dedicated TV hospital drama training wants me to say "stroked out" - it sounds nicer - vaguely sporting.) He remained in the Royal Infirmary for three weeks, I stayed in a (lovely, by the way) guesthouse in Newington.  People could not have been kinder, but I was shaken to see my redoubtable, mercurial father reduced to helplessness. It was almost worse that cognitively he was perfectly intact. He was an old man, suddenly, like all the others on the ward.
Sigh.

However, it is all going to work out, I think. JB's Dad will need to accept (finally) much more support at home - if not a live-in housekeeper, certainly a drop-in health visitor and his house, a terraced stone-built one, the kind that lines the main street in every town in Ireland, will need to be adapted accordingly.

Re-sigh. How did we get this adult and responsible? Don't you feel this is all a dream and soon enough you'll wake up and find yourself a child again? For surely no-one really expects us to handle all this? We're not ready! We're far too young!

But there we are. I have been invited to dinner at my friend, Sister One's house. It is to be hoped that I am not too far gone feral to have a conversation, or say, use utensils to eat.

Your not quite there yet,
T

About our feline friend: he was indeed persuaded to leave after a while. He does belong to someone, I divine from his smooth, debonair appearance. And The Someone could be worried. So off he ran into the night, with a tale of adventure to tell. He continues to walk that uncomfortable line between fear and curiosity about us - he's a fraidy, but not so much that he can resist the temptation to come back, sit on the garden chest and stare through the glass at The Humans eating at the table, with his green marble eyes. Oh moth to flame!

Well, enough about moggies. And on to something completely different, like.. wills. (I'm really a loss to broadcasting, with links like these). I've been updating mine, a thing I've been meaning to do since I was married five years ago, to include the JB in the beneficiaries. Now, don't misoverestimate me, I am quite the church mouse with regard to my worldly possessions, but for some complicated family reasons that I don't fully understand, my life is insured massively. As my dear brother likes to say: You're very rich.. but only if you die.

Brothers. But hey.. I just thought, I could fake my death, pick up the proceeds (eh - somehow), and go travelling! If I ever vanish, look behind you.. that might be me in the shades and the black wig. Creepy, eh?

But I have some more things to say first, before I run off to get the ball rolling on that. Last week I attended the funeral of a relative in Christchurch Cathedral, an ancient, turretted place that somehow manages to be both lofty and warm. The choir sang a piece from Bach's Cantata No. 147, pure and clean as ice, as the sunlight streamed in the stained glass windows above us. It was a beautiful send-off for my great-uncle, who was nearly 90 and had had a good - charmed, maybe - life.

The place was full of second cousins, none of whom I really know.  They live in other places, have other accents, other values, (They are glamorous! They iron their hair! They wear shiny black tights and flouncy hats! (Not the men, though. Pity.)) and yet, there is some kind of tie there. I, who am of the lefty mindset that says we're all brothers under the skin, that friends are the family you choose, didn't know quite where to place them. How kin are we, this unchosen group of people? Shouldn't we see each other (outside of funerals, ideally) if we're to have a meaningful relationship? I wondered how important that is, and how our child might fit in to it. Might he or she miss looking like his or her relatives?

What do you think, anyone? Do you look like your relatives, and does that matter? 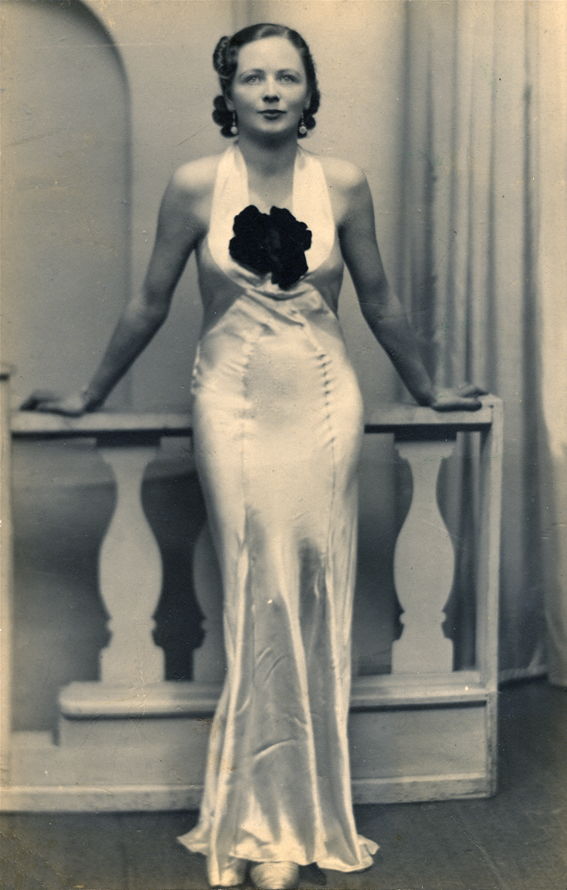 Nonetheless, it was touching and fascinating to hear about my long-dead Grandmother (as pictured above - she inherited the glamour gene) who was revealed to be a dancer, a stalwart defender of escapees from boarding school, a minder of nieces, a horser-around, a charity supporter - none of which I knew before. We talked, we exchanged stories, we sang an old Algerian soldier's song after a hearty lunch and it was all good.

based on real events

Here I am! Sorry for the week of silence. The last few days got a tad frantic - I must bore you all rigid with my confused musings about that soon. And my childhood nemesis, sinusitis, struck me once more. [Ow.] But for now, this.

I took to the  bed early on Friday night, tired from the excitement of seeing Kinshasa Symphony.

And then, this happened. Do you remember Señor Gato, the cat that patrols our garden - that I have been trying to tame with pieces of pink meat and milk? 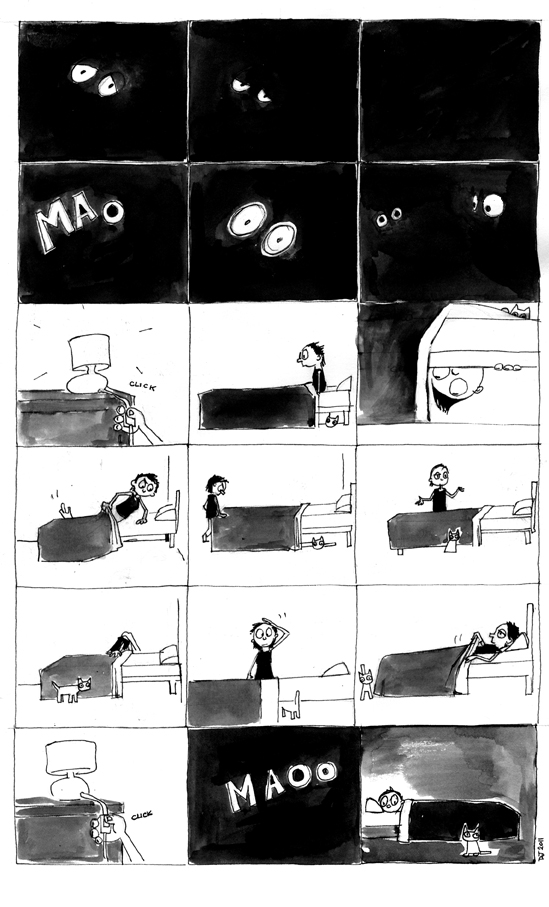