I apologise for the long silence. I had somesorta bizarro virus which reduced me to a bedridden shivering wreck for a night last week, and then, the next day, I had some disturbance in my vision, whereby a square section of my sight dropped out and went all pixelated and started pulsating sickeningly. And after that, I was afflicted by pins and needles in my hands, a numb thumb and, the ability to see dead people.* But after a bit of lying around watching the disco special light effects on my eyelids, I suddenly recovered and felt reborn and Full of Renewed Purpose.
So, eh. If anything like that ever happened to you, let me know? Maybe we can start a support group, or something.

Life has been packed recently, I think you could say. On Saturday I met some friends I made doing some voluntary work about 10 years ago. A group of social eccentrics like me, they eschewed Friday nights in lively, warm Dublin pubs and clubs, to hand out sangwiches, soup and company to homeless people on the streets of the Dirty Oul Town. An oddly absorbing activity. Oh! the vomit-dodging adventures, the tragic stories, the cold realities, ambulances, the characters, the randomers in the back of my orange Beetle.

I am not really a group person, but it would be impossible not to be at ease with those people. It was that unicorn of things, a group with no hierarchy and no cliques. You'd come in after the work and everyone would be decompressing loudly after their week, buttering bread, throwing flasks around, stirring soup, complaining, slagging each other. It was a family. We'd pile into cars and split off around town, and though there we went into some dark, frankly dangerous places, the people on the street looked after us. We felt oddly invulnerable. Or naive, depending on your point of view.

One of us, a spark with the nervous energy of a caffeinated humming-bird, is now a project manager for a large Irish charitable organisation. He set up a camp for displaced people in Darfur. We aren't half proud of him and his mental brand of kindness. He'd answer his friends' texts pleading with him to join them in the pub with the immortal words: FUCK OFF, I'M SAVING THE WORLD. FUCK OFF, isn't that fantastic? He is an emphatic, capitalised kind of feller. Other catchphrases: I FEEL SO VIOLATED (in response to nearly anything). And: MAD IN THE HEAD, in response to anything else.
all pronouced in a paint-strippingly strong Donegal accent. (Think Liam Neeson's accent, but on steroids, if you are not familiar.)

And though there has been a sea change in the thinking about how homelessness is managed, about how giving people food on the streets is "enabling", I still like to believe we did did more good than harm. That's about all you can hope for, isn't it? If a real workable alternative existed, then yes, you could say we were helping them to choose to live on the streets. But when someone has nowhere else to go, then, what about that? A sandwich is at least a symbol that someone cares. Don't you think?

Here endeth the nostalgic interlude. Other news: there has been a deluge of biblical proportions today - a great big clatter of rain. Honorblackman is asleep on my desk, like this: 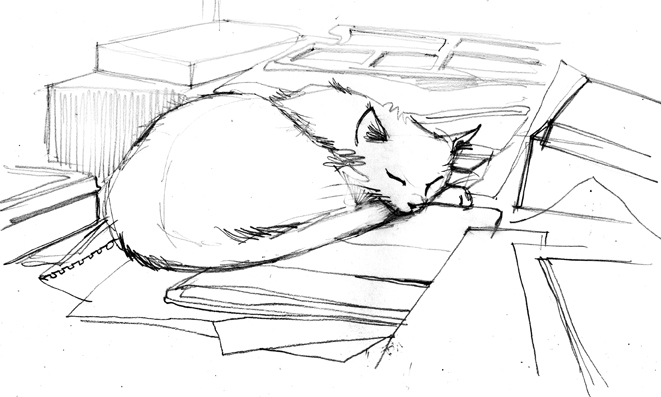 You would think she is exhausted, but that is not the case, believe me, unless sleeping 20 hours a day can tire a cat out. I would draw her doing something else, but she has taken laziness to the level of an artform, so there you are.

We completed the last of our interviews with the detective today. Hurray! We wait now while she compiles a 65 page report on us - (SIXTY-FIVE. About us. Poor, poor woman. I predict she'll lose the will to live around page 14.)

Also, today is the JB's birthday. He is 37, a fact we will celebrate later by ingesting large amounts of cream and sponge. And so it goes. Another year.

*Not really, about the dead people.

Many thanks as ever to Mel for her kind mention of KDiddy. I love that KDiddy's presence was known all over the world through our network. I think he'd be all embarrassed and secretly tickled. 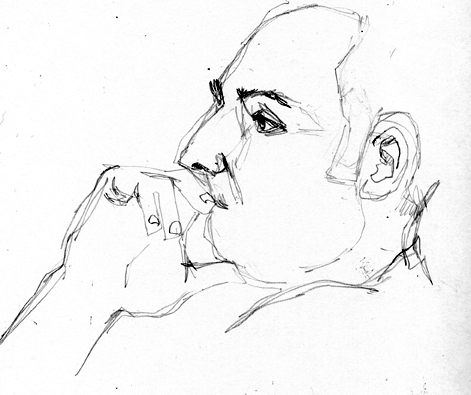 The JB is - I suppose - how you'd expect. One minute he is brittle and cheery, the next morose and lost. I don't know what it is to lose both your parents - I distantly imagine feeling unmoored and unsafe, but what would I know? My parents are alive and (well, not exactly) hale and hearty. If anyone has any words of wisdom, I'd love to hear. As it stands, I am trying to provide a semblance of normality. I say trying: the other day we were chatting idly about why the Dutch football team wear orange. I piped up, feeling a bit clever:
Because of William the Orange, is it? 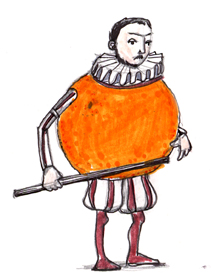 In the background, life continues. I almost enjoyed the second of my teaching sessions. Those people, they were listening to me! To me! And doing what I asked them to do! THE POWER. It could go to my head. Please, readers, I implore you: shoot a tranquillising dart in my neck and haul me off the stage if I start wearing wrap around shades like Bono and pontificating randomly into the microphone. I'M BEGGING YOU, HERE.

Also, suggestions welcome on this: I have to go for a medical next week as part of our adoption assessments. To this I say: Oh, crap. On two counts:

A. There may have been some comfort eating of late. The road to the future seemed paved with Cadbury's digestives, and I trod that road willingly. And I'll have to be weighed, a thing I Never Do.

B. I dread telling the doctor, whom I haven't seen since, about the miscarriage of last year. Shouldn't they just sort of KNOW? I know this is lily-livered and neurotic of me, but I just don't want to say the words to her.
(Do you know, just writing that down made it seem possible? Hurray for blogs.)

I hope to post again later in the week, which is forecast to be nice and quiet. (FINGERS CROSSED, OBVIOUSLY.) P-kitty, parts two and three, for sure. The megalomaniac continues to lurk, providing inspiration.

Till then,
Your historically imaginative,
T