I have an important question for people who know these things:

I am a dried husk after yesterday's task,  the minding of my neice for four hours while her mother was at a funeral, and her father, my dear, dear brother, was being fed grapes by a servant in a gold lame (can you just imagine the accent on the e, I am feeling delicate) tunic, or whatever it is you do at a "rugby match".

All started fairly well. She's three and a half, after all, you can talk to her. Can't you? Brother, before he left to swill mead out of a tusk, did express a few misgivings. And I:
She's a child, not a wild animal! HAHA HA!

We played for a couple of hours cheerfully enough. Playdough, ponies, drawings of Scooby - the whole gamut of my child entertainment repetoire was run. And then, I don't know why, exactly, but the mood suddenly went south, and despite my best and warmest reassurances that Mummy would be back soon, (OH PLEASE, GOD) and poor Dazzle wouldn't be stuck with her mean aunt for all eternity, there were many, many tears and quite an impressive tantrum. At this point, she wasn't able to speak, and trying to comfort her just resulted in renewed wailing, like she was suddenly petrified of me. So I retreated for a minute and she, seeing her escape route open at last, bolted from the room to fall asleep finally in front of Dora.

At his point, her mother came in and I thought how much I'd always liked adults. Aren't adults lovely? 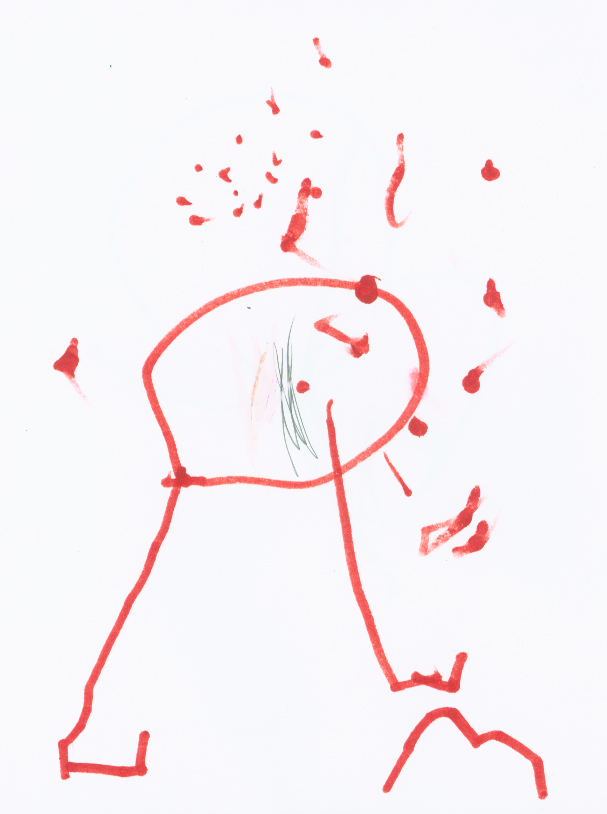 This is Scooby. Or maybe Daphne. Hard to know - small children are MAD.

So now, I am beset with doubts. Up to now, I assumed that kids liked me, but now I see that was based on just one child, Spike, (brother of Dazzle) with whom I have a long-standing rapport based on drawing monsters and games where we pretend the bed is a boat, surrounded by sharks. WHAT IF, dear readers, WHAT IF Spike is actually the only kid in the world who sees the point of Bobbie, as he calls me? What about our poor adopted kid?

And rather more urgently, be safe, all those who are in the way of Irene. 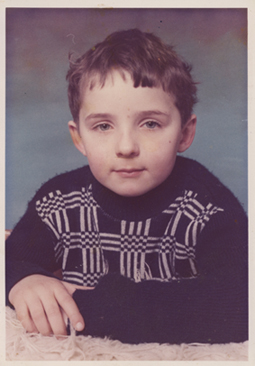 We are becoming reacquainted after his return. I don't know if it's just me, the sociable hermit, prone to overstimulation, but when he comes back, I am 80% delighted to see him, and 20%: well, I don't quite know where you're going to fit. Luckily he takes this in good heart, and - this is his great gift to us, the glue that keeps us together - he makes me laugh at myself and my tortured artist persona.

Of which related moments I have been having a few, recently. Dear friends, allow me to bore you senseless with my adolescent dramas  take you back in time. Baaack (insert swiggly lines to denote time travel) in tiiiime...

It's Dublin, 1990's. I am having my heart broken in the way that only someone in their twenties would allow, repeatedly. Finally, Dramaboy leaves and goes to live in London, abandoning me in the worst way, and that is, by not even telling me. He hooks up with a woman of 36, (which seems so old, at the time. Huh.) It's all drama and gloom. Drama and gloom, droom and glama. You get the picture.
For my part, I reassemble myself, and I go to Italy for four years, to have another disastrous relationship with an Italian man, who is not capable of fidelity. I'm in a man pickle again, what I need is five years of therapy, but I haven't even got the wit to extricate myself. I feel sorry for him, I take him back. Finally, not content with that level of droom, I go home and, inexplicably, get involved with Dramaboy again, (who in the meantime, has been dumped unceremoniously by the "ancient" girlfriend. Ha.) leaving Italian Fannyrat in Varese to his demented mother.
DramaBoy is difficult, it's true, but he's good value, he's exciting, (or so it seemed). Wouldn't you know it, he's a musician, and he knows interesting people, like the ones who wrote that famous Channel 4 series, about three priests. Yeah, that one. He's wildly inconsistent, really, he's not what you could call stable, certainly, and we fall in and out operatically over a couple more years, culminating in a catastrophic June Bank Holiday during which he talked me into moving in with him and then out again, in the space of three days.
Finally I get angry enough to have the energy to leave. I'm done, as my American friends say. Done like a cake. Fried like an egg. I leave for real. I change careers, I love my new work, and who needs men, anyway? I go to America, I enter a Golden Age of Luck. I feel blessed, the universe smiles. I am lonely, at times, I have lost my tribe, and have to find another one, but work is rewarding and enlarging, and I am happy.

THANK ALL THAT IS GOOD, you might well be thinking. She's going to grow up now, and get a life. The JB, this is where he comes in, and he's normal, right? No Oedipal complex, no particular weirdness, not undiagnosed bi-polar or whateverthehell. And you'd be right. I go back to Ireland, when my visa runs out and the Kerryman, equal parts Academic,  Wild Man, Goofball, gallops in on his rides in on his bike, and we are together. Phew. We have our troubles, as you know, but they are no one's fault and we get on well, mostly. There's a flow to the proceedings that I haven't known before.

Fast forward to the Dog Shelter, August 2011. They are inundated with visitors and I am posted on the back door, where I am to herd folks away from the kennels so they don't get the dogs all agitated. It's really boring. It's a bit hot. Half an hour passes. La - la - la. No, if you wouldn't mind going that way, or that way, thanks. And this is where I make my fatal mistake. I start googling the old crowd, idly, on my phone.

And a site jumps up. I click on the site. (Oh, the temptation to link to it! Best not. I'd be rumbled. THAT would be excruciating.) The site blasts out a song. THE SONG IS ABOUT ME. It's all about letting me go, it's about how hard he tried, and how he doesn't want to be bitter.
What now? What?
Arrgggg.

And that, my friends, is why technology is bad.
T

You don't know how pleased I'd be to hear your stories. Log in as anonymous, if you like. Go on, join me in the pit of excruciation! It'll be fun! I have gin! Or what was it I used to drink? Brandy and ginger!
(Bleah.)

Thanks for your input everyone. You're a bright lot, I tell you. More on the outcome of that whole affair later.

As I wait for the JB to return from Kerry, where, he proudly informs me, he is becoming a Wild Man,  communicating only with clicks, I consider things. It is sunny and quiet, the only clouds marring the horizon being piffling things like the fact my ancient gift car cut out on me twice yesterday at traffic lights, giving me palpitations. Or the cat. I purchased her a pet carrier of her very own yesterday, with the intention of, one day soon, somehow screwing together enough courage to persuade her to enter it and thus be transported to the vet to discover if she has a identifying chip. Or if she is in need of any cat stuff. Like, teeth-scaling or de-furballing or whatever it is you do to cats. (Tips to the cat novice on the subject: welcome.)

I am feeling strangely well. (Do not kick me for daring to say it, universe. Please.) In fact, I have a lot of energy (for me), and am seized with the desire to Make Stuff. Dare I say ambition itself (!) a thing I have rarely been afflicted with before, is visiting. I am working on my comic. I have the rest of the year to get it online, if I want to fulfill my new year's resolution.
(How about you? Do you feel more or less ambitious as time goes by?)

Money, unfortunately, will persist in being an issue, so I am applying for various jobs - art in the community type things, including, daringly, one that involves making animation with Young People. (Gasp. Young People. Aren't they very dangerous?)
Ah, money. Many years ago, dear readers, I had a proper job and somehow pulled off, in the pre-Tiger days, the purchase of an apartment in Dublin. After living therein for a few years, on and off, I let it out to a motley assortment of tenants. What an uncharacteristically sensible thing to do! I delight in the young Twangy's falling into that piece of luck, for that trickle of rent has helped kept me afloat for lo these many years. At present it is occupied by a young academic in classics, whose resemblance to a grown-up Harry Potter is striking. The insanely polite if unworldly Adult HP (He once asked me to employ a plumber to fix the cistern. Turned out there was a bit of silt preventing it from filling as quickly as usual.) is however going on sabbatical, presumably to exchange in-jokes in Latin with his colleagues in Cambridge. And so, unless he has wrecked the place with his mad Toga parties, I will have to refund his deposit.

Be that as it may, all first world problems, after all, I am grateful for the feeling of respite. It seems we are emerging shakily from the dark, and maybe our luck is changing.

Will you look at that? I got the nellies as predicted and deleted this post. However, I have placed it behind the magic curtain at this address:

If you'd like to read along, please email me, and I will send the username and password along to you.