Thank you for your comments on my last post. You need never worry about giving me what they call "assvice". You are too kind and experienced to be judgemental or miss the point. If any advice did not seem relevant, I would just put it aside for another situation which it might fit. So that is all good.

While it is true that I suffer at times from what my lovely American flatmate used to call Big Picture Disease (taking the long view to the point where it becomes hard to have an appropriate response in the moment), a marriage is a long, awful, beautiful stream of experience, where you run into all kinds of unexpected limitations - many of which you have to recognise as your own. You know how it is. So, as you can imagine, the JB and I have had every kind of conversation about our future, from the tearful to the comic. Our style is fairly frank when we argue, but that is only a tiny percent of the time. The rest is really good and the last week or two have been in that mode. We're fine, at least for the moment.

ANYWAY. This was just to let you know I am aok, and not living in a damp bedsit in Mountjoy Sq with an angry cat pissing on my single bed. In fact, I am off to a spa tonight, no less. Oh yes, it's a high-octane, devil-may-care life I lead, you know!

Thank you very much for the ear sympathy. Fascinating/disgusting report: it's quite a bit better, has deflated to a more normal dimension and I can almost hear through a minor static interference. An improvement. I am sporting an impressive Augmentin pallor, however, the kind you otherwise get from being a consumptive, or doing a long stretch inside.

Some of you have kindly enquired as to the progress of our declaration, and so, let us indeed marvel at the smoky and clogged engine that is the relevant Authority, the cogs of which do turn extraordinarily slowly.  Our paperwork is all complete, and now lacks only a stamp of approval from the Authority before we are cleared for take-off and it will all be sent on to India. Mysteriously, however, the Authority cannot seem to stamp the documents in good time, and oh dear! They are so backed-up! And lifting the stamp is so tiring! You'd be wrecked doing it!

Uffa, as Italians have it. UFFA.

As it happens, India itself is closed to new applications until January, while it reconfigures its own system. So if one wanted to be one of those perky, positive people, one could say that at least the two delays are coinciding. But, I don't know, maybe in my youth I read too many moralistic children's stories, wherein the poor blighters wore saggy, wool swimming trunks and were always getting their comeuppance but all this is taking on the aspect of a very heavy-handed karmic lesson. Festina fecking lente, etc. Embrace the crap life you are living. Live in the fecking moment. Seize the saucepan and brain your spouse the day. GOT THE MESSAGE, Universe.

That's the hardest, isn't it. The JB and I had a most weird conversation the other night. I know this is going to sound rather bleak, but let's not panic here, it's really okay. It's not as dire as all that. In fact, it's almost as if talking about these things make them more manageable. In a way.

Imagine the following being all conducted in the most lack-lustre tones, like we are discussing our rubbish collection, and whether the green bin alternates with the black every two weeks, or not:

JB, comes in after work, flops on sofa: Sorry about this morning. (He stamped off earlier in the day, in a snit over my response to the delays as above.) I just feel like throwing in the towel, sometimes. It feels to me like our wheels are spinning.

T: What do you mean, throwing in the towel?

JB: You know, giving up, leaving.

I simply had no response anymore, felt calm, in a "Ah well, 'tis the tapestry of life." way, and just lolled there like a badly stuffed doll. I can't continue to keep the show on the road. He is simply going to have to decide for himself. Every suggestion I make - counselling, research, bereavement groups, reading the helpful, straightforward The Portable Therapist - he won't do any of it. He doesn't recognise that the feelings aren't the problem, it's the defeatist behaviour that is. Of course I know that he doesn't mean what he says, he's not going to leave, he loves me, and blah, blah, blah, but those words still undermine my faith in us. My brain starts whirring. The genie is out of the bottle, and I am thinking with half my brain, the part May beautifully describes as sitting there eating popcorn through it all: Blimey. What would that be like? Where would I live? Huh.

The human brain, if mine is anything to go by, anyway, abhors a vacuum. It - I - want to know where my next meal is coming from, at the most basic level. I find it so hard to keep the vision of the alternative lives beside each other in my head, and not preempt whatever will be, and not throw myself on my sword.

Of course there was much apologising and forgiving later. But what has been said cannot be unsaid. 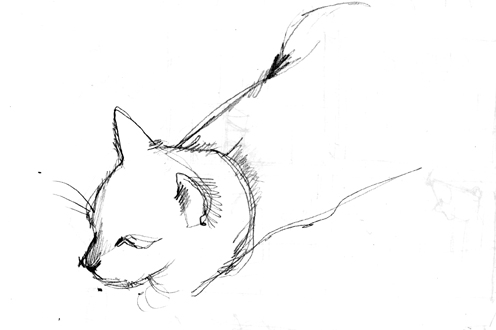 She makes herself comfortable.

Thank you so much for your kind commments on the situation with the JB. They were all enlightening to me, all a comfort. You are the most intelligent, empathetic people. You are right there with me, even when the subject is so close to the bone, and you might feel personally implicated. I really do blog to know I am not alone.

I didn't mean to leave that post there so long, like a harbinger of doom. Blimey, what has it been - a century - since my last confession?

My ear is broken again, dear friends, reducing me to a four walls sort of existence. Ah. The human body. I never know whether to be more fascinated or disgusted by it. I have a stinky ear infection complete with whooshy, sea pounding on the shore sound effects, like when you hold a shell up to your ear, and I feel all sealed into my nutty little head and physically enfeebled. YUCK. Poor kids who suffer from this kind of thing all the time. Me, I am almost never sick. Can't complain.
(Ed note: And yet you do.)

A weekend of being trapped under P-kit, (she re-earned the P since an unprovoked stratching incident involving the JB. It was nice niceniiiiice being stroked by him, and then SUDDENLY IT WAS UTTERLY INTOLERABLE. HOW COULD HE? SWIPEHISS!), thinking we should really paint the ceiling, actually, no, what we need to do, is dust it, has not filled me with blog-worthy material. The JB is so good when I am sick. It's all endless cups of tea and soup, wrinkled brow and concern. I am on this rather unsatisfactory liquid diet (not the brow, mind you. Never touch the stuff.) because the Ear of Stink has aggravated the TMJ which my friend Sister 1 (she's a physical therapist) diagnosed recently. Apparently you are not actually supposed to be able to unhinge your jaw as if you were a boa constrictor eating an entire rat! WHO KNEW. This all means that I can only open my gnashers two centimetres. It's like having my jaws wired together.

This is what they call TMI, isn't it?
Sorry, folks.

Terribly boring being sick. I AM TERRIBLY BORED NOW. And,  urg, I have so much to be doing. How are you? Tell your Aunty Twangy.

T
ps. Has anyone experience selling stuff on etsy? I wondered if I should go that way, last night at 4am. Seems harmless? Large audience, no need to see anyone in person and make embarrassing sales pitches or (Heaven forfend) show portfolio?