I'm in that dopey, la-la, mood, where I keep half-doing things and getting distracted and half-doing something else. I have loads to do, I am sure of it. But you know when you don't quite know what to do first, and you think: I know, I'll write a post? And then I'll feel better, having given myself the illusion that I have achieved something.

Here she is, the murderer herself: 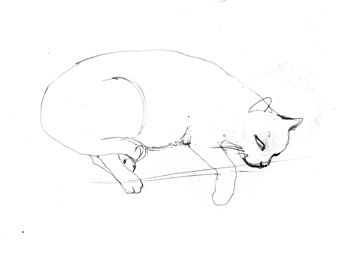 I fear she is about that fat. She might have lost a few ounces recently. My human friend R, to the cat, when she came to visit:
Ooh, you're enoooormous!
BODY FASCISM, that is.

Anyway. How goes the mood with you?
T

IS IT JUST ME, I WONDER

A couple of weekends ago:

TWANGY, seeing an opportunity to bond with DAZZLE, (the three-year-old niece) while the rest of the family are engaged in an interminable game of Capitalist Market Forces Monopoly, extends 'claws' and roars, experimentally:
Rrrrrar! I'm a tiger.

TWANGY: What are you?

Further conversation, this time with a student:
ALEX(not real name!): So, in relation to.. I just want to understand. My head is wrecked here. When you copy a file, where is that?
TWANGY: Emmm. Well. What? It goes on to the clipboard.
ALEX :  But.. where is the clipboard?
TWANGY (not feeling terribly patient at this point): It's just out there, Alex. In virtual space.
In your computer's RAM or something, Alex.
ALEX: But. It's  just these notes don't talk about the clipboard. I think these notes are a bit...
TWANGY considers a rapid exit out of the window.

Speaking of the Hotel Tallafornia, and the "learning" that takes place therein with my unemployed would-be designers, it should come as no surprise that we are dealing, per usual, with the Usual Suspects. The same ould cast of characters. There's the one with the attitude, there are the moaners, there are the gigglers, there are those afflicted with shyness, those encumbered with laziness. The sickly, the smart, the motivated, the dense. 'Twas ever thus, was it not, teachers, educators, librarians? The moaners were moaning at me last week, and I had this lightbulb revelation: these people (whispered The Little Voice of Obviousness) are not my friends. In this relationship, here,  it's my job to hold the thing together, and be respected.

This is stunningly self-evident, I do realise. Maybe it's the chronic informality of the Irish, but up to now, I have always assumed that friendliness, a general enthusiasm for the subject, respect for their efforts and a pretence at a flat hierarchy would see me through this teaching gig. Now, I realise that to act as if there is no difference between us, except that I just happen to be standing at the other side of the table is just not going to work. After all, I am in charge of time-keeping, and there is money involved in that, this being a state-sponsored training course. So, how to play it? Shall I become (gets carefully into American character) a 'hardass'? Would this be better for all concerned? Thoughts on this welcome. What is your style?

I've told you about the hotel as venue of higher education in this brave new world, haven't I?
We are in the one heated room on the fifth floor of a mostly empty office block, (itself mysteriously part of the hotel), surrounded by empty offices like this: It's so fantastically creepy, like some weird art installation. The other morning, the previously abandoned and chilly reception area had leaflets scattered around and a big poster over it:
THE PENTECOSTALS
Presumably they checked-in-but-can-never-leave the night before? Yet no sign of them since.
And then, odder yet, and, to use  The Young People's favourite word, 'totally random': 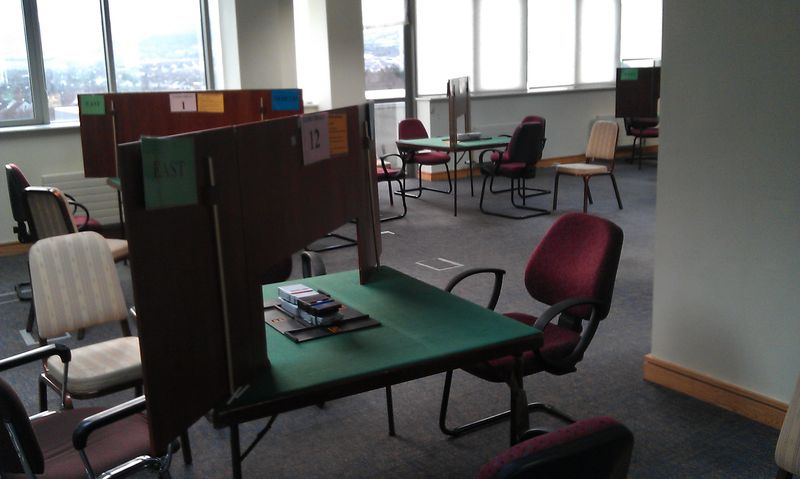 What next, friends? The Annual Trapeze Artists' Convention? The League of Capuchin Monkey Handlers? YOUR GUESS IS AS GOOD AS MINE.

Rest assured, I will keep you posted.