Home Archives Profile Subscribe
things: not exactly as they should be
wasteland 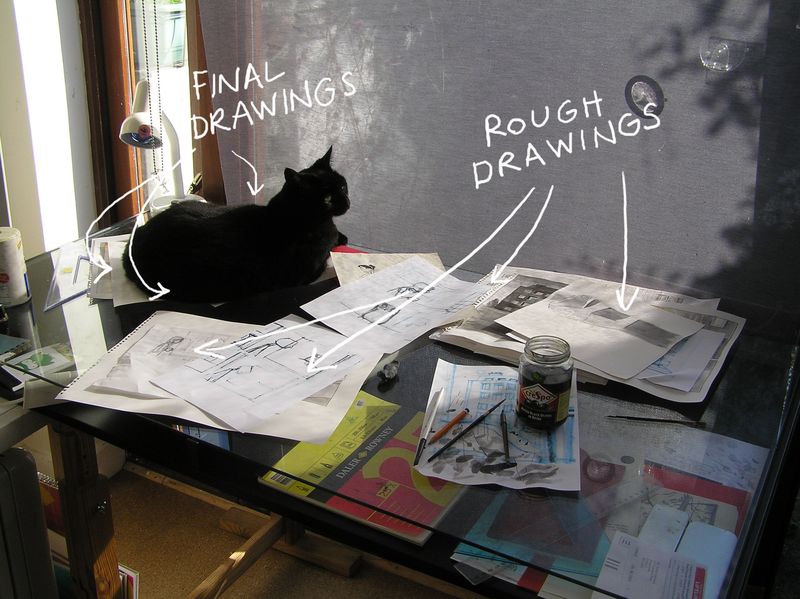 She must be fitted with some sort of radar.

It seems that drawing comics every day does not make for thrilling blogging content, indeed, as will become painfully apparent in a moment or two, I have absolutely no news at all. I wanted nonetheless to thank you for your (as ever) kindly and empathic comments of last week. I have cheered up quite a bit. And, Vietnam has reopened (sort of) in the interim - so you know, it can happen. All is possible. I have reverted to hopefulness as the vision of the JB's potential American children has faded. Of course they won't say "mere" and "draw"; I was just testing. No, what they'll say is "hey" when they mean "hello"; "hey" being what you say when surprised to see, say, Rock Hudson. (As well you might be.) "Hey, is that Elvis?", for instance.

They may well also say "store" when clearly what they mean is "shop". One can't know.

[Somewhat related aside: Despite 4 years of living in country stateside,  the exact meaning of certain words continued to elude me. So I'd revert to my former modern language student self, as if with little notebook at hand, just like when I lived in Italy: so is  "asshole" more the equivalent of "dickhead", or "bollocks" in this context, I'd muse to myself, and collect examples that proved it one way or the other. Isn't it strange how swear words in another language don't have the same impact on you as your own language? Funny enough, I find it's the same in US English. I could say "asshole" with total aplomb, just feeling a bit of a phoney. But the Irish "bollocks"? No. Gasp! Only in an appropriate moment of passion.]

Time is moving along at a fierce clip, is it not? It's nearly October, and the back-to-school golden sun is giving way to a autumnal chill. Time for chimney sweepering and car servicing and other evidence of being an funtioning adult. So it is, I put on socks, draw, I run, I go to choir, eat, sleep, making life up one day at a time, like we all do.

All's quiet on the edge of the world.
T

I use Hey, Hi, and Hello and I shop at the store. As to the swear words, I guess that's why I get so irritated when I hear people trying to use foreign (and yet still English - it does not have the same effect in other languages) slang like they know how to use it appropriately.

Nice paperweight, by the way...

Beautiful paperweight. I want one.

I am still and to this day and forever utterly delighted with the immense difference in swearitude between 'cazzo' and 'dick' despite the fact they mean EXACTLY THE SAME THING.

(I say 'heya!' to people. Like a Californian hippy who has read too much Ursula K. Le Guin. AND I'M EUROPEAN eheu. Because I've read too much UKLeG).

There were certain expressions that I considered very mild (eg. "Bugger") that used to make my London-born-&-raised co-worker cringe ... and vice versa. It was pretty amusing. I became pretty conversant in Cockney slang (rhyming and otherwise) -- I had two dear friends that spoke it native ... unfortunately in retrospect it must have just sounded extremely silly when I used it. I know what you mean about phoney ...

Girl, hang in there. I am so thinking of you, listening hard and all the good things ... lovely to hear from you. Love from America. Hard, sincere, sisterhood kind of love.

I'm so sorry I didn't comment on the previous post - I find it really hard to comment if I read on my phone, but I do little else these days.

I have some slightly more productive thoughts which I will save for an email.

(oh, and we also went through the "it's all my fault" stuff but as Mr Spouse pointed out, as we are officially "unexplained", there's nothing at all to say he would have any more luck with a different wife, and he doesn't want a different wife).

I think it's not so much radar as some kind of sophisticated heat-seeking adaptation. Like how migrating creatures always know where north is.

If you used "hey" both ways -- and we Americans do, at times -- you get to say things like: "Hey! Elvis! Hey, Elvis." Which has its rewards.

Your people's habit of wearing pants and vests under your clothes is a mystery to me. As is the whole "left-tenant" business.

Twangy, I'm glad the world is brighter (and especially glad to hear about Vietnam opening up). And sorry that I could not lend my two cents' of moral support last week (not that it could have done much). It's such an unfair world in which we live. The truth of that periodically takes my breath away.

What a lovely at-home kitty you have there. Now THAT is a cat made for lazing away the day and I hope he is a good muse for you, as well.

(I like the sound of your JB. I have an image of the two of you patching things up and in it he takes you by both shoulders and gives you a gentle little shake, and tells you that you're the only mother he wants for his children...I'm sure that's more Barbara Cartland than reality but, still. I like to imagine it:)).

Draw on. I hope it is going wonderfully.

My DP used to say that putting on socks is the point of no return (and then he/we would go out for a run)
I'm so impressed you are still running! I can walk all day long, but running? only to catch a bus.
I try not to be sad that 'sort of opening up' is good news these days. If only we could fast forward.. But one day at the time will have to do, and some days even that seems fast.
love and hugs

PS, I think kitty wants the P back. P-kitty.

An American colleague, who thought she was thoroughly conversant with British English had issues the other day when she tried to tell people where the "coat check" was, it was only when she was told that the word was "cloak room" that the people in question got it. Which seems odd as let's face it even in little old England we are far more likely to wear a coat than a cloak nowadays. But the language barrier is there just enough to stop us getting complacent.

KNEADED ERASER! Also, ADORABLE OWL! Oh, and some sort of cat thing, too. How could life not seem sunnier with those things around.

It kind of makes me panic to think that my life is made up of days, that I am CURRENTLY LIVING MY LIFE. Eating too many doughnuts and glowering at my husband. Perhaps I'd better do something more worthwhile with my afternoon...

I'm late checking in with you sweetheart, and I have evidently missed your Sad Spell; for which I am doubly sorry, as you have always been such a rock during mine. I am mightily glad you are feeling More The Thing.

Ah, socks. Season of mists and mellow socks. I own ridiculous - RIDICULOUS - numbers of socks. Occasionally I catch up with the laundry, and start to idly count my sock hoard. I got to 25 and stopped last time, slightly horrified at my sock riches when so many go cold-toed. But... yes, Autumn is Here. I know, because I have started wearing my socks to bed!