I delayed the publication of this very frivolous post but friends on the east coast of the US now seem to be okay. I hope. So, in the spirit of Now For Something Completely Different:

On my parents' kitchen wall there is a photo of my school hockey team, (or half a team - there were only 5 girls in the class) - now mercifully faded by the sun. I reproduce it here for the purposes of evidence: 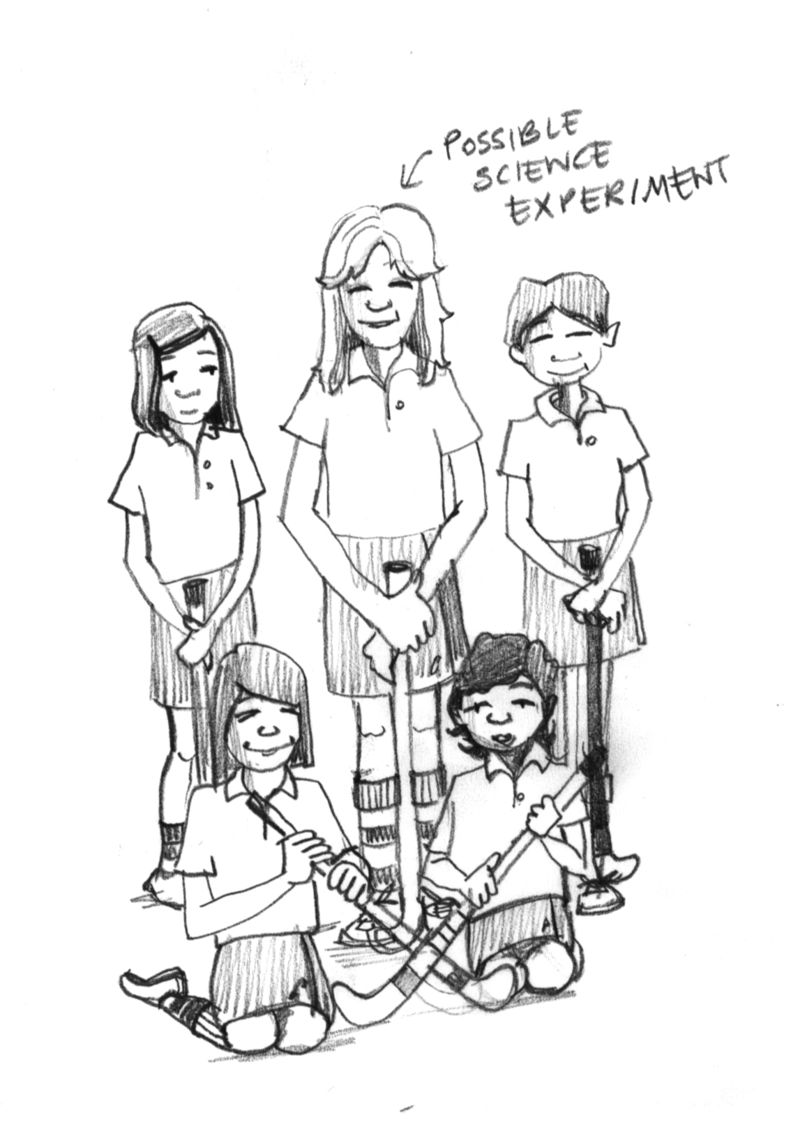 I am that one, in the middle at the back. I am eight or nine in this picture and I am five foot tall.
I also have marmalade-coloured hair, for your further information, and couldn't stand out more if I jumped up and down, singing RAH RAH RAH, look at me, I'm over here.

Fast forward to The Teenage Years. I am now 13, still extra-tall and of the orange mane, and I have done what my rather proper family sees as falling in with The Wrong Crowd. I have a wild friend, who makes it her business to Lead Me Astray. She is in a school called (unbelievable this, but true) Al.exandra College for Young Ladies. I go to a co-ed in another part of town. One day, for some reason which now escapes, we (the co-eds) have the day off while they (the gels) are in school, and for another reason which also flees my adult mind, we decide that the right thing to do here was clearly for me to dress up in her uniform and go to her school with her.

They'll never notice, she airly declared. Rhino is so ancient (headmistress of the day: Miss Ryan) she doesn't even know us. It'll be fiiine.

So it was that I trooped along with them to Assembly that morning. During which Rhino had a long look at me, not surprisingly, perhaps confused by this apparition. Who IS that? Am I meant to know that child? Maybe I am losing my marbles. But who would..? ..and why?
Yes, well. There are no answers.

If I remember well, we nipped out of Assembly before poor Rhino's brain could catch up, and legged it to Science. There I was, an intruder into Science, in my borrowed brown uniform. In Al.exandra College for Young Ladies. Ah, yes. Teenage Kicks might have been written for moments such as these.

The fortunately young and very decent science teacher (Miss Poole!) was, naturally enough, somewhat perplexed to have a new member of the class just sort of suddenly there. As we were explaining to her what we were up to, another more senior teacher came in to survey the class crossly - presumably not able to believe what she thought she'd seen at Assembly - But, how peculiar! There can't be? Can there?

Oh, there can, and there be.

Miss Poole, showing admirable presence of mind, quickly hid me underneath the desk. Bless you, Miss. And after Science, it was deemed by My Wild Friend best to maybe.. just sort of.. bunk for the rest of the day? And so it was that I found myself hiding in the outside changing rooms, bunking off (someone else's) school. On my day off.

[Teenage stories welcome. Mad or not.]

A quick update before I scramble to get ready for a exceedingly lengthy trip over a fairly short distance. Ah, the Irish train system! HOW FUN.

The day of  torture drama went as expected. Our mentor, a man, the first I've met with a moustache waxed into points, arranged all us candidates all around a big square of paper taped to the floor. Then he knelt and placed in front of him a tin of Golden Syrup, which sat there, onimously, as he told us a story about his Granny. Then he rose and poured the stuff all over the floor from a height. Which was good. I liked that bit, especially when we were waiting for the slow loop of syrup to hit. (Mmmm.)

Then there was an awkward bit where we had to tell our story about our food item, and then chuck it on the paper, or crumble it and chuck it around in whatever way we thought fit. People had all sort of stuff: a potato, some sardines, some Mikado biscuits, coffee, crisps and so on. I brought a Cadbury's Snack Bar, the same as I had every lunchtime for 12 years of schooling. I told them all about this modest gift of love my mother packed for me day after day, and how I could make a house now using that amount of bars (3,000, give or take). Am not at all sure if this was "good" or "right", and indeed that was the odd thing about the day. Allegedly there was n right or wrong, but there really was. I mean, there we were in an apparently "therapeutic" setting, but actually we were all 12 of us competing for only three jobs, vying away and trying to show ourselves as the most bubbly, inspiring and yet soulful and kind. Pfft.

Twangy does not bubble.

Then, after a rather pleasant day apres Golden Syrup lollygagging around town, meeting people for lunch and so on, I was interviewed. By then I was rather weary and fed up with the whole gig, which I didn't by now even think suited me, but I sort of vaguely tried to pretend I was, and answered the questions and escaped finally at 6pm.

And now, I just find out I didn't get it and am feeling that uncomfortable mix of relief and pique that you feel when you don't get offered something you don't want. Ha.

Hrmm, I bet Mikados got it, you know.

So that was that.

Thanks for the encouraging replies to my last post, which I took to mean that yes, I should keep posting, and it doesn't matter what form it takes. You know what this is, don't you? This is licence to do what I like!

See, I find myself in a dilemma such as our beloved W4I did a while ago, before she found a new direction as the wonderfully entertaining and wise Aunty Lizzy. For I also doubt there'll be any interesting news for the foreseeable and as such, this blog risks becoming a bleak wasteland with only the occasional plastic bag* blowing through on the burning wind, on its way to someplace better.

I have therefore come up with some ideas to keep the desertification process at bay. Please feel free to vote for your preference, if you have one.

1. I could post drawings. This could get quite boring quite quickly though. Oooh, maybe I could draw people on public transport and the JB could make up stories about them. (This is a creepy talent of his.)

2. I could just be really trivial, filling the internet with meaningless drivel about the cat. I feel this goal is quite within my reach.

3. I could be very sporadic. In this vision of my blog, the few posts I'd make would be Really Good and Worth The Wait. [Downside: High potential not to work. Updates might never happen, as I am paralysed with great expectations of self, sitting around in velvet jacket, smoking and waiting for muse to smile, etc.]

4. I could tell a few bizarro but true stories from my teenage years and so on. I could tell you all about the time I spent a day in a friend's school, having donned their uniform, and everything, for instance. Essentially I broke into another school, masquerading as one of its students. All true.

I think that's all I have in the way of suggestions. If you have one, feel free to make it.

Next week I have rather a scary interview, for a job working with hospitalised teenagers. I have no idea why I applied. Why did I? OH WHY. The interview will include a presentation (gulp) of my entirely spurious and untested theories about art in hospital settings, for young people. Teenagers, I mean! We already know those are very dangerous. And if that wasn't enough, which it clearly is, the letter also makes chilling mention of an hour and a half workshop with the mentor, a Drama Type, most alarmingly. I fervently hope he doesn't ask me to pretend I am a tree.

Are any of you lovely readers Drama Types? It's not that I wouldn't like to be, I would. It's just, well, as I understand it, within all of us lurks the Barrier of Embarrassability. To be a drama type you must break with scalding cheeks through this barrier to get to the other side, where you can frolic, sing, and pretend to be trees at the drop of a hat, without even blushing.

I am barrier intactus, folks. I am all walled up, like a good Northern European.

What to do? Can I fake it, I ask you?
Advice welcome, per usual.

*[This is an automatically generated Typepad-recommended link. "Plastic bag"? Well, I think that deserves a bit of research, in case anyone is in doubt of what it is. Similarly helpful, links to "teenagers" and "Northern European". Thanks, Typepad! We're all much better informed now. Mysteriously, it didn't offer any link for desertification. Perplexing.]