Modern life. Isn't it infuriating sometimes? In case there was any doubt:

Things are fine. Things are groovy. I made these frames for my stall in a caffeine-fueled frenzy during the week. The JB came in that night, pale as milk, with a migraine. This always makes me feel a bit sick - his mother nearly died from a brain hemorrhage in the nineties, and there is a chance it is hereditary. Sure, I could google it and find out, but I was too scared, so, in a splendid example of a displacement activity, I made these instead: 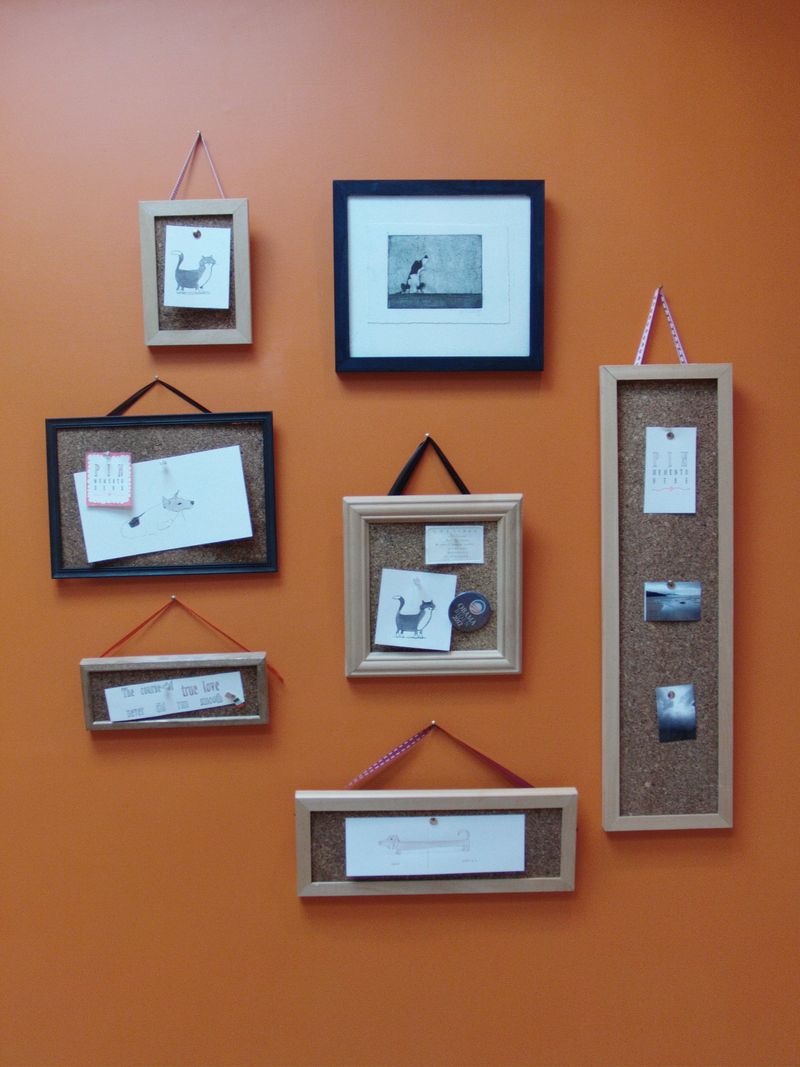 It's be nice if I could take a nice photo like Dooce. No dice, no dooce.

I feel better now, having done the modern equivalent of venting at the well.  Thank you, internet. And thank you, friends. My only complaint about you is that you will insist on living all scattered around the globe, willy-nilly, instead of on my street.

Score on the board for Technology; all still to play for.

Leeds from Dublin by train and ferry. Yes. I am this far from getting a notebook and jotting down the train reg numbers. (I am holding my hand up; my thumb and forefinger are two millimetres apart.) I admit it, I love trains.

Leeds: a diverting, positive experience. Everyone was sweet, the hotel bed was feathery, the breakfast abundant and the comicon was anthropologically and culturally fascinating. I was alone, which felt like a novelty rather than a challenge. And I do love train travel: the chance to eavesdrop on people's ordinary commutes, goings-home and nights-out. The chit-chat! The regional accents! I love travel for its insight into other ways of being, and brotherhood-of-mannish as I am - the similarities between cultures are so much greater than the differences - I take delight in observing those, all the same.

Of course, as the shameless self-promoter that I am (not), I handed out one of my business cards. Wait! No. I meant to say NOT one. Gah. How I loathe all that. I need an agent or something. Or tranquillisers. I wonder if there's a name for What I Have and if I can be Helped.  In the meantime, I have signed myself up for a stall in a Christmas market at which I intend to sell some cartoons and picture frames. One might be fooled into thinking this sounds like fun, but is in reality a sort of extreme aversion therapy for me to have to sit there behind my own drawings and take money for them (one hopes). Oh! Pretzel-cringe.

This week has been packed to the gills with choir activity, with all its attendant love triangles, betrayals and drama.Choir is a hive of passion! It's a hotbed! I better not go on.The internet might go up in flames.

Other than that, I have not been Out Much. This is the problem with working by yourself, I find. Your boss is yourself, your employer is yourself, even (as at present) your source of inspiration is yourself. As you can imagine, this can get intensely boring, though I am certainly enjoying writing my comic. This week, for instance, I have to write/draw a sex scene. I want it to be real, encompassing accidental hair-catching and elbow-poking, but at the same time, sweet. Sweet but realistic. Hrmm. More on this later.

I must dash off and meet a friend and meander around the nearby, famous graveyard, (appears in Ulysses!) final resting place of many patriots and famous figures of yesteryear. We have fallen into this habit of late, on a Saturday.

Hmm. That's not weird or anything, I wonder?

I better go now, before I have time to regret disclosing myself as a middle-aged goth and trainspotter.
Till soon, friends.

I have been on house arrest these two or three days due to a Cold of Filth © May, and before that due to Tax Season with all its attendant feelings of woe-is-me inadequacy.  Tax Season! It's the diametric opposite of Christmas. Instead of decorations and bonhomie, we get out the spreadsheets and financial embarrassment.

I am not feeling sick, just a bit under-powered, and my mind, to which apparently my body has decided it can afford to cut the supply of energy, as it never saw the point of it anyway, has gone on a kind of brown-out. It's a dim cavern, with just the occasional flare of a naked bulb lighting the air for a moment before dying altogether. Frankly I have no clue what I submitted as a tax return. A sardine? Some chocolate coins? Eh. Fingers crossed?

But! There is light at the end of the tunnel of dimness. You'll see!

I am going to a comicon next weekend. In Leeds! I am very excited about this. There'll be cosplayers, comic artists and other exotic creatures like the actual, much-respected Alison Bechdel -  of whom Bean approves! I will rattle over there on the boat and train because I have to be different I like that sort of thing, clutching my business cards and cherishing the hope deep in my heart that I'll catch a glimpse of someone with a flat cap on. Perhaps with a whippet? COULD I BE THAT LUCKY?*

I will document. But now, I venture out for the first time this week.
Stand by, Dublin 9, I haven't been Out for ages.
T

*I do realise the flat cap and whippet is a stereotype that probably never existed. It's just such a charming, particular one, I can't help wanting it to be real. I mean, if there was a town in Ireland where people wore tam-o-shanters and had Irish Wolfhounds, wouldn't you want to see one?

I wouldn't blame you if you did.