I have been in what the JB refers to as "an artistic delirium" (I presume with no irony. Maybe I should be retro-offended? Hmph.) due to Having A Job On. Hence the lack of digits where usually there runs a stream of nonsense.

++
I weakly proffer these delirious pieces of news (these news? These newes? I am knackered, as we say around here. I am in fact comatoast as a malapropist well known to me says.):

My friend L (aka Sister One) and I are at the really good Italian Cafe called, rather hilariously, Eataly (Eat a Whole Nation!), across from the Met Office.

A TV weatherman comes in. A titan of the Irish Weather World! Watch out, mortals! For he could blithely smite you with a mighty flash of lightning. He sits down to have a little anti-cyclone, or a warm weather front or whatever it is these greats consume. We are impressed. After some heady moments in his august company, he is joined by a Weather Lady, also a Big Name in Weather. L and I look at each other in alarm. Who is looking after the weather?
I mean, really. No wonder it's such a mess.

There's a minute fieldmouse in the kitchen. Kittaloo is showing some mild interest in it. Well, I say interest. She's patting it on the head gently with her paw. The JB is persuaded to let the mouse out and he runs off unharmed. I am strangely proud of the kitty's lack of killer instinct/complete dedication to Sloth. Kitty, my sybarite friend, you feel no need to be anything but completely useless, like an objet d'art, only furry. Well done.

My Hungarian tenants of the Hunted Look, who moved in to my apartment a little over a year ago, seem to have skidaddled. Or perhaps have gone off the whole paying rent thing. They're not in a renty kind of mood, maybe? Though I always thought there was something a bit desperate about them - they judged the apartment to be "safe" when they saw it. They were on the run from Interpol, I think, was the Only Logical Explanation. I am going over there to spy on them tomorrow.

I do hope they haven't wrecked the place.

More of this thrilling stuff later. Also, perhaps, actual news on the subject of Adoption - though not the breakthrough news we were waiting for - just inbetween news. I have long resigned myself to the idea that this will be very slow, but that if we can persist long enough, it will happen.

Thank you for sticking it out with me.
xx

We must rush these to the New World, asap. Andie needs them urgently.

How are you, nice human visitors? And occasional internet spider?

Chez Twangy, all proceeds apace. Telly Ban Tuesday was a moderate success, once I suppressed the initial slight feelings of panic. What to do? I ironed a lot, listened to the radio, then I went to my friend around the corner, who is the tormentor inventor of Telly Ban Tuesday. She made two loaves of bread. I watched. It was easily as good as television! Then I went home and feel into the Sleep of the Virtuous, to wake feeling like a new woman.

Just as well. I have been visited recently by the twin horrors: insomnia and (what, thanks to you, I now recognise as) ocular migraine. I haven't been having pain with it, (THANKS BE TO ALL THAT IS GOOD) but I have some visual disturbance, feel slow, spacey and queasy, and - I know this is odd, even for me - I don't feel like myself. I don't know how else to describe it. Don't worry, it's not like I have suddenly changed into someone called Betty who has a Proper Job and wears those matt tights that stick to everything.* It's just as if someone got into my brain and moved stuff around a bit - maybe redecorated it with ochre flock wallpaper? And animal print cushions? I feel a bit off, at any rate. My usual razor-sharp focus ability to have some coherent thoughts has slowed, too, though otherwise I am pretty functional.

I suppose I better go to the GP, eh? It's just, you know, doctors. Unfun. I prefer to pretend there is no need of them. Also I need to consider triggers (not JAFFA CAKES? SAY IT ISN'T SO) though I believe it's simply a matter of Disturbed Sleep Patterns myself, brought about by holiday laziness. And maybe hormones.

It's odd to think as your character as just a collections of chemicals, cells and electrical impulses, isn't it? This is the kind of thing that leads to unhelpful thoughts on the Absurdity of Everything.

Umm. So. There we have it! Maybe we should all lie down in a darkened room now, on our separate continents.

*Not really! That's a joke - the bit about Betty. No need to call the men in white coats. I mean, of course she doesn't have tights! That would be ridiculous. 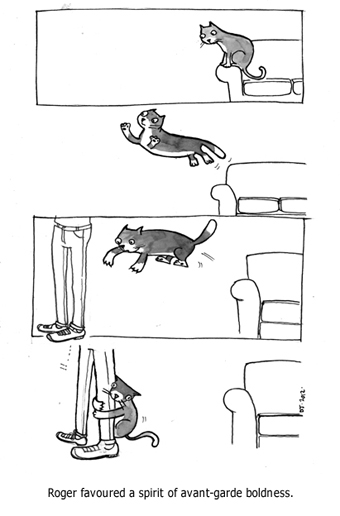 The brain fog has cleared; just as well, because it's the time of the year where I make rash promises. I wouldn't even mention it, but Some Sort of Magic happens when I document my resolutions here: unbelievably, it really works! As evidence: (No need to read. Is one of my more demented posts.) I actually did do and am still doing the running, the drawing, the comic-making. (The boldness: am working on. As above.)

What have I stumbled on here? A subconcious-programming device? A direct line to the inner me? I feel all powerful!

I wish you all so many good things in 2013. May it be great, healthful and joyful for all of us.