writing is good for you

..it says so here. And so, despite the lack of any satisfying news or pleasing narrative arc, I persist in my quest to fill the internet with Twangy-related minutiae. It's funny, I find the process of recording My Fantastic Life slightly embarrassing, but oddly, quite enjoy re-reading it when a decent stretch of time has passed. My memory is so poor that it is nice to rediscover the events of the past. Almost a blessing, you could say.

The JB is away again being fed vol-au-vents and Ferrero Rocher chocolates at a ball at the Embassador's house, or whatever it is you do at a large political science conference. Or, he might be polishing the choreography for POLITICAL SCIENCE! The Musical. We already have put some thought into the opening sequence, where the JB leaps in front of the audience, making the wipe dance move made famous by John Travolta in Pulp Fiction, growling with maximum drama: Welcome to POLITICAL SCIEEEENCE. I, for one, think this would be a great way to kick off the first years' first ever politics class. They would never forget it.

Somehow all the compensations that the freedom to eat/watch odd things at odd hours/sleep in the middle of the bed like a starfish afforded by his absence are not as fun as I might have hoped. The laughs per hour quota is so much higher when he is around. However! I am getting out and not exclusively talking to the cat. Which is positive. Today Dazzle (my neice) is five - I was going to add again, but the poor child has in fact never been five before. It's just the strange phenomenon I suffer from - the rest of my life hurtles along at the speed of light, it seems, but Spike (nephew) and Dazzle seem to move along at a comfortingly leisurely snail's pace. Anyway, in the slow universe, she is having a party. At which 12 five-year-old girls will bounce on a castle and Have Their Nails Painted. [Insert my childless person's judgemental comment on this here. I do wonder how much of a killjoy parent I would/will be. Quite a big one, I would have thought. Here, a cardboard box and a stick for Christmas, and Use Your Imagination, like in my time? Who knows. Seriously, though. Don't you think it's important to allow a child to yearn for things a little? The yearning was half the point of being young, wasn't it? Don't you remember that delicious longing?]

In other news, a weak and pathetic version of Spring may have arrived. I have planted my potatoes, anyway. This happened: 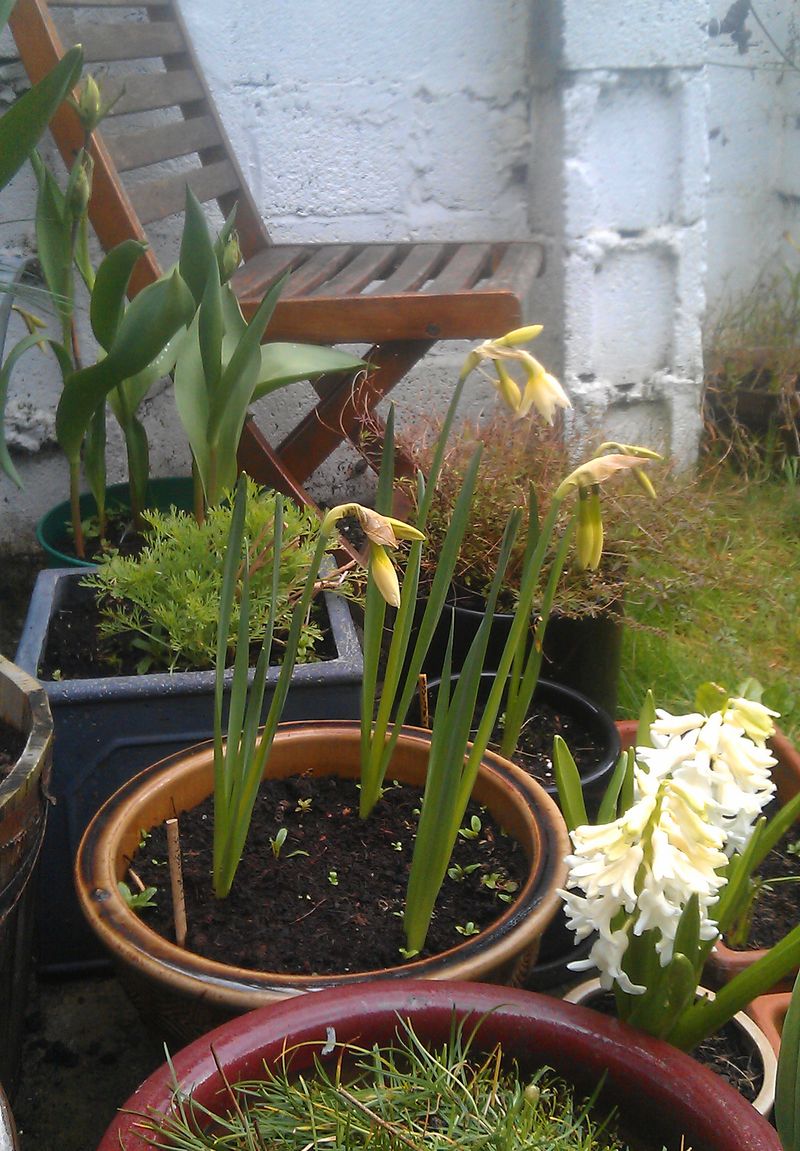 And having been quite productive this week, I now decree a Fun Friday, during which I have decided, I escape the studio, and do a bit of writering and drawing in a cafe or/and the local library. See? FUN. Sure, other people have another idea of fun. But let me tell you, it's is not just a beer ad with all the good-looking and well-adjusted young people laughing their heads off together. No.

Good Heavens, it's racing up to lunch time.
Have  a good weekend, everyone.

I do actually have some legit excuses for not grappling with my proposed topic: Let's Talk About Adoption! I have been on a short snowy tour of West Britain, during which (HIGH POINT!) I met the delightful HFF and May and H. Like, in the real, physical world! (Blog friends are wonderful, you know. You don't have to explain yourself to them. They already know you! And, you already know them! It is truly a rare and wondrous thing to feel accepted in that way. Also, these people are very funny, clever and kind. They are great.) Then I have had a minor cold leading to distracting thoughts on the subject of Lemsip: why must it taste like lemon-scented air-freshener? There was some workiness. A choir performance. Little Car went to the Scrapyard. And so on.

But, of course, the real reason is my head was firmly implanted in the sand, and for no other reason than habit, really. Well, habit and an unwillingness to crank up the ricketty ould machine of Hope. As I mentioned last time though, there actually are things in progress. The Minister for Children went to India a few weeks ago and initial reports as to what went on are "positive". Some members of a group I belong to are to meet her (the TD/minister) and get a more detailed report on it. Also, there are positive signs over the USA's "imminent" opening, both in terms of private and state adoptions. (We may still switch.) So! That's all very good.

But, as I say, there's a reluctance deep within to allow myself to feel hopeful: I feel I am driving with the handbrake on. Like this tortuously slow arrival of spring: the temperature grudging rises a degree every few days from the preposterously frigid temperatures of last week. But then sometimes, I can feel it, and I entertain a brief fantasy flashforward of our future: there we are in a wooden house built on the hill at my parents' house in Wicklow, sheltered by my father's silver beeches, with our lovely Indian daughter. There's a fat pony swishing her tail at the gate, a black cat sleeping in the sun, (Yes. Though the transport of said Kittalo thereto is not something to eagerly anticipate.) It's sunny. We are where we've been going to all these years.