I intended to update you last week as to our Nod-and-Smile session: success thereof, but life intervened in the shape of a DONKEY DRAMA. I know that sounds rather absurd, but I suspect those of you who have ever had livestock of any description (I refer, for instance, to HFF, the redoubtable farmers) will merely nod in weary fashion and say, yes, this kind of thing happens all the time with animals. There is Always Something.

In a nutshell: when my horse Smokey, the Oldest Horse in the World finally departed this life, his companion, a small, elderly black mule of uncertain temperament (not to mention parentage) called Jenny was left surprisingly forlorn and depressed. This was odd, given she never much liked him when he was alive. It appeared the Jenzer was indeed a herd animal, however anti-social, and so it was that an emergency donkey called Cromwell was delivered. He was a five-year old brash upstart and hemaphrodite, (seriously. He has udders.) now "resting" after appearing in Tudors, the BBC series, (also seriously) which was made down the road.  He played a.. donkey, I suppose. As opposed to the back half of a human!

(Oh dear. I might be getting a bit giddy. Over heated, perhaps.)
(Also, this isn't really a nutshell, as it turned out. Apologies. I will wrap up the donkey story now.)

Last week he was reported by my mother, (with whom he lives) (though in a field, you understand)(not in the living room) to be lame, which meant I spent the entire day on Friday at their house waiting for farriers, trying to contain an outright rodeo situation (he didn't much care for being poked in the abcess in his foot) and running around buying carrots, poultices and duct tape.

I think we need a picture: 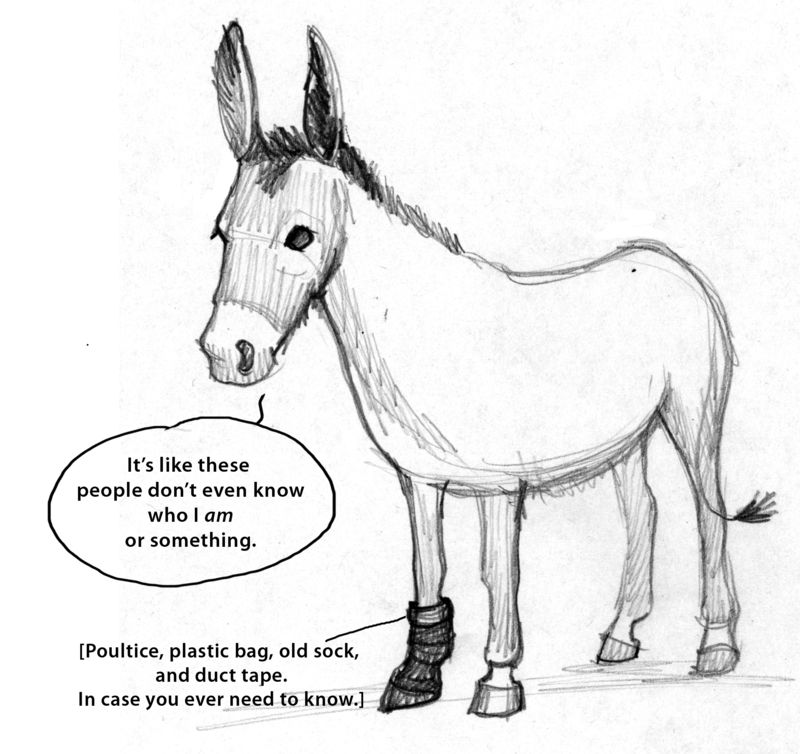 (He is on the mend now, thank Heaven).

This may not be the most seamless link to our adoption meeting but we could find ourselves in the next millenium if we wait until I have time to write that post separately. It went well, I think. We nodded, tutted and smiled at all the information, as required. You know, normally I am broadly in favour of big government but I found it irksome that Mammy Ireland has some "issues" with the US's interpretation of Hague. Specifically, they raise the question of why Americans do adopt internationally but not domestically. Which..? - is that even accurate? Who do? Show me the statistics, then. And if so, how are we meant to respond to that, except by saying we don't know? We are talking about many many individuals making personal choices! I mean, really. Also, the International standards body put fostering within the country of origin above international adoption, which, also, really? The fact that we speak the same language and are immersed in American culture, visit regularly and that the JB has a US passport don't count. Though of course they do.

I understand there have to be guidelines and rules - they are there to protect the vulnerable. I am not pretending to have the answer to this - I know it is not straight-forward, and potential problems have to be raised. There is, at its heart, pain inherent in adoption, but that at the same time, it can be a wonderful, positive thing, when done in the right way. We know this. This is the complicated thinking the adoptive family must grapple with and be able to resolve so that one day they can explain to the child that everything was done properly in his or her name, with due respect. We have thought of these things.

/End rant. The papers are being processed. After that, we can have them progressed by the agency.
Hurray.

The weather continues to be beautiful over here, warm and breezy and not excessively melty, though I hear from my trusty BBC Radio 4 that summer storms are on their way to the UK. Ooh, thunder! Hold on to your hats, friends. I hope it will be invigorating rather than frightening.

An anti-cyclone hangs over the Emerald Isle this week, inspiring us Irish to emerge and toast ourselves till the colour of frankfurters. I am in my studio which is nearly south-facing, and so must be exited before 1pm when the sun turns it into a furnace. Yesterday I had the bad idea of complaining thusly to my workmate, flatmate of yesteryear and friend, the ultra-cool madrileña, Maria, and she replied:

it is 38 degrees here so don't complain Twangy about the heat or I send you some degrees...

THIRTY-EIGHT. OH EMM GEE.
[Feel free to complain about the heat below. I want to be simultaneously sympathetic and horrified.] [Speaking of which, it's nearly one! I must get my wimpy self out of here. It's like 26 degrees!]

Tomorrow, the JB and I must return to the House of Adoption and go through a nodding and smiling session with our social worker, the detective - all part of the process of changing country, apparently. We are going for the USA, as we have FINALLY agreed. Good to have clarity AT LAST.

Thanks for the encouragement for the comic about nothing, friends. Here's another one, this time about Luther. Luther, for those who don't know, is a seductive if somewhat ludicrous cop drama set in London, starring IDRIS ELBA, he of The Wire fame. The plot is a bit barmy and visuals a bit gruesome, but IDRIS ELBA.

Well, I think the point is made. 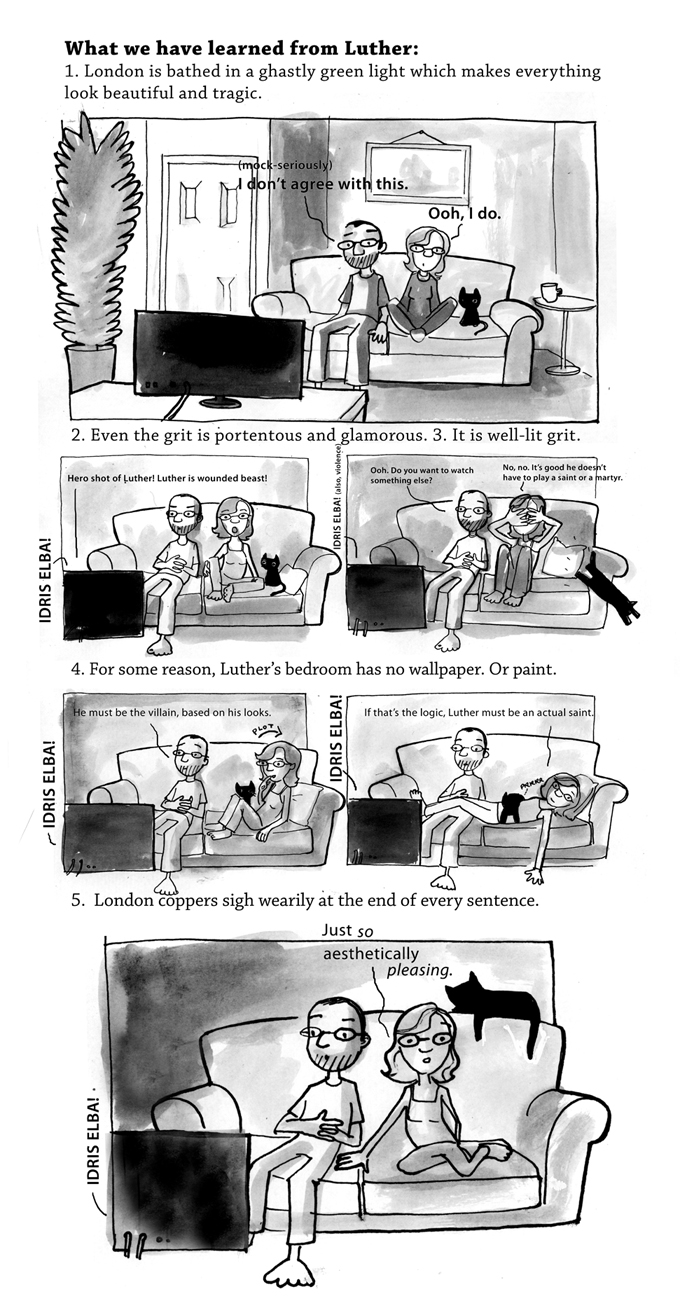 entertainment, of a sort

I have taken faffing around to professional levels this week. It's desperate. It's like some sort of deathly paralysis of the brain, I just can't concentrate on anything. I (wisely? unwisely?) have involved myself in a speculative YouTube cartoon based business project that has snowballed insanely and become a Huge Monster, and my two partners have taken themselves off on holiday, leaving me to finish the it, or feel demotivated and just faff, as it happens.

So I said to myself: I know. What I need to do is give up on the project, and spend ages amusing myself making a comic about nothing for my blog. The comic needs to be about nothing, mind! Nothing at all. Just for fun. And it needs to be something I can finish today. 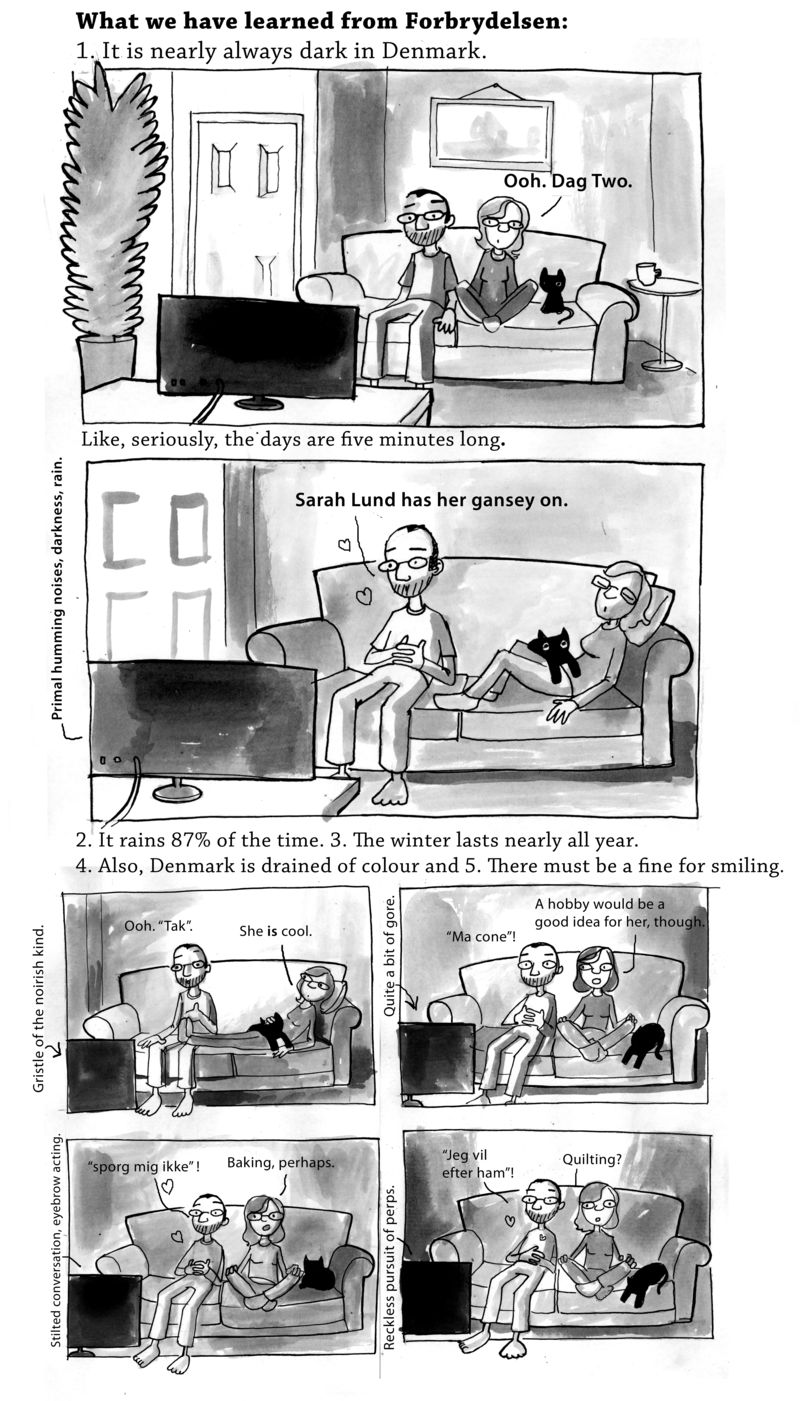 I feel better now. Tomorrow is another day, after all. I'll be back soon on the whole USA vs India debate.
Till soon, all
T