I forgot to mention my sleeves were successfully lengthened. No more Tyrannosaurus-style arms! 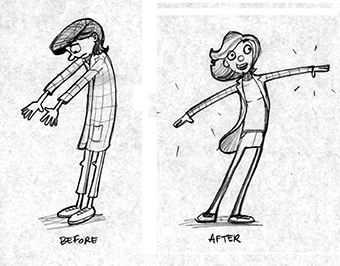 It's been a funny ould week. I went to see a herbalist (at the behest of a good friend who swears by it) on Monday to wail briefly about my insomnia/migraines/betty-headedness. We met in a purpose built clinic in a field, with rustic, half-panelled walls, sort of cowboy saloon meets Meath bungalow. She handed over what looked like a petrol container of Meadowsweet and Lemonbalm petrol juice tincture cough mixture fluid. Off I went. Since I've been knocking it back before bed, I do feel better, I admit, the only drawback being a sort of Meadowsweet hangover on the first few mornings, that slowed me riiiiiiiiiiiiiight doooooooooooown and made me regret not having swigged 180mls of neat Whiskey the night before instead of the petrol juice. At least it would be some fun.

The cure lasts for two weeks. We'll see. What with that, and a small avalanche of the workiness landing on my head, there has not been as much lying around time as I would like. Never, never enough time to lie around. When, oh, when? Never, oh, never.

I must soon go and put my vinyl singing trousers on and join the choir. Before I go, I'd like to point out that I have just realised I have (black, opaque) tights on that I bought in M&S in the mid 1990's. They had a long fallow period lying in the bottom of my wardrobe in my parents' house, before I picked them up again, but still, not bad eh? There are young people training to be Guards in town at this moment to whom I could truthfully (though not well-advisedly) say: I have tights older than you.

[Future Self! Look, like Magnum PI, I know what you're thinking. You're thinking in the years covered by this blog (2005-2013) all sorts of catastrophic natural and man-made disasters have befallen the world and have not even earned a mention on TPtheEG. Well! I, Present Self, do realise this. I mean, I don't actually live under an actual stone. The fact is I do have reactions and opinions about these things, but they are nothing particularly original and do not add anything to the discussion. And so it has been decided by Twangy Corp that they remain outside of the remit of this blog which shall confine itself to my own mostly mundane and first world whine-ish story.

YABOO to you, Future Self.]

Last week there was stuff to do, in the shape of a Einaudi concert, tax deadline (with attendant confusion and drama) and a choir performance, but now.. let the mundaneity run free!

Social media is ruining my life
All sorts of people are now connected to me via my ill-advised excursion at the hands of the Mad Yoke that is LinkedIn, as whined about at length here. They keep popping up in my email programme - some students, an adoption group contact, to whom I am now reconciled by force. A person with the same name as one of my students, but who is not the student, but a randomer. This is good for me, I (try to) think. I'm getting Out! An editor in the Irish Times, too. Can't hurt, though for the life of me I don't know how I had his email address. But no members of Opus Dei. Phew, I thought.

Then I had the idea of installing viber on my phone. Sister 1 told me how fantastic! it! was! Failing to mention it is the drunker, more outlandish and mortifying brother of LinkedIn. I installed it, all ready to take part in this delightful new world. It did its black (and unauthorised!) magic and the next fecking thing I knew the bloody thing was bleeping salutations at me by the very member of the Opus Dei I was trying to avoid all these years. Serves me right for being the craven, conflict-avoidant worm that I am.

And now I have to woman up and communicate my position to her. Like "reasonable adults".

Did LinkedIn send you an email to your blog account to ask you to connect to me? Say no, please!
I do hope not. I am not trying to lure you into the open, be assured! I didn't point it, as far as I know, to my dedicated blog account but who knows how far its horrible tentacles reach.

I was messing recklessly with it, (Procrastinating. Tax day coming up, you understand.) and now it’s running riot like some embarrassing drunk uncle at a wedding who insists on trying to fix you up with everyone. I have no idea who it has contacted. Hopefully not people like that girl from the Opus Dei* I knew in college who I haven’t seen for years! OH NO.

I keep thinking of more potential contactees - my students from the course last year! My adoption group! And thinking, oh. Eeek.

Now I must go, still pretzeled with embarrassment, to pick up my coat from the nice girl in the alteration shop, where the sleeves are being lengthened to cover my long, over-reaching wrists.

[* I celebrate religious freedom, I hope you know, dear readers, with the proviso that the respect needs to be reciprocal. Commentary on my choices on whether or not to get married for instance, is not very welcome.]

My friend from round the corner skyped me from her hotel room in Dubai where she is having a whale of a time. She asked me what was new with me, and I had that horrible clanging echo in my head which means I couldn't thing of a single news item. Uh. Uh. Come on, brain! No. No. Nothing. Is anyone else familiar with this everyone-else-is-in-their-own-beer-commercial and-I-am-at-home-eating-stale-digestive-biscuits syndrome?

Must get out more.

And so I am going to embarrass us all with some probably entirely unwelcome insights into my marriage.
Last night, the JB earned himself a prod for snoring. What? he said, all offended. I've been awake since I got into bed. If that's the case, you won't mind my prodding you, will you? Also. stop. snoooor.ing.

And while I am on the subject,I am going to have to impose a daily question limit on him. Or maybe he could just pause for a milli-second to engage his over-educated brain before he asks me:

From the final category, the recent classic:

What does it mean, tartan? 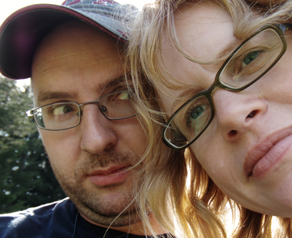