calm after the storm, or, possibly, between the storms

Apologies for the slight gap in transmission: I had what my mother calls A Back and it hurt to sit. The mighty Balmoral arrived and pushing it up the stairs (it was light! Honestly.) I managed to pull something. (Well, that's one version. The other one says the toilet gods were not pleased with my mockery of them and have exacted their revenge. Take that, lowly human! I CERAMICALLY SMITE YOU.)

Be that as it may, all better now, though I must adjust my working posture somehow. (Apparently we should all be standing to work. [Resigned eyeroll.] I mean, what next? Working while on the eliptical trainer? Could you be into that?)

We had a house visit from the social worker - the detective has been replaced by a social worker clone, with exactly the same conscientious, caring attitude, even the same intonation, only male this time. Remarkable! It went well, I thought, the usual faceache-inducing smile-athon, but I am relieved it's over - I hope an interlude of summer calm with very little mowing and minimal tidying might now follow. 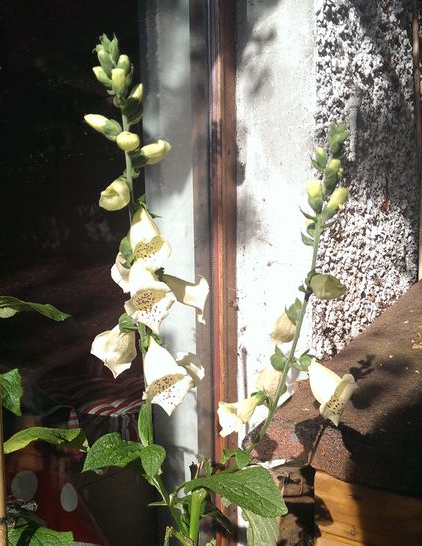 Someone (being the JB) accidentally beheaded the whole flower-head of this foxglove a few weeks ago and it grew two new ones. Isn't nature amazing? Not to stretch a metaphor, but I was sort of hoping this could apply to me too. Not so much that I'd grow two whole new heads, you see, (they would argue) but have a similarly invigorating new burst of life. In fact, if we could all have a little metaphorical new head-growing, that'd be great, Universe, thanks.

Happy Sunday, all. I hope you are well.
T

because the post on the subject of the parents: care thereof requires time and thought, and I am in short supply of these, especially the latter. My mother is doing a couple of weeks in a sort of Rehab place for people with arthritis so we've been busy attempting to keep my father alive. The man can't boil an egg, no exaggeration, though to be fair to him, by rigidly adhering to the list my mother wrote for him, he has survived the first week. Also this week, our pack has also arrived safely in the USA. (Some documents need to be updated as they become available but anyway) I'M SO HAPPY AND RELIEVED I COULD CRY.

At some point it occurred to me that I might as well read the pages of blood test results I got back and they said I had a B12 deficency, possibly, which is no surprise given my non meat diet - well. I mean, diet makes it sound like a planned thing, which it is not. ANYWAY. The side effects sounded unpleasant (bleeding gums, weakness, confusion, pale skin, often with a lemon tint (??)) so I started taking B12 supplements, felt better instantly (I am highly suggestible, needless to say) and thus began a FEROCIOUS, ACHING HUNGER. This happens whenever I take B vitamins. Is it just me? I feel like my stomach is a vacuum into which someone could fall with sound effects: AAHHHHHHHhhhh! Bang. Anyone?

Also. I am seeking a toilet to replace our banjaxed, cracked one. Tell me if these names seem funny to you, or if it's just me, which I fully accept it could be. They are the old-fashioned kind, because the groovy close-coupled ones won't go in the bathroom:

THE BALMORAL
THE PHOENIX
THE BURLINGTON
THE VICTORIA

These are toilets, can I remind you? Not hotels. Not Rolls Royces. Not yachts.

The modern ones are called things like Melissa, or Zoe. Girls' names, for some reason. There are no Gavins or Declans. This is wrong, isn't it? Why should they be female? Pfft, marketing people. I would go for modest, solid names like THE TRUSTY. THE STURDY, maybe. Or, THE UNIVERSAL LEVELLER if you wanted to be philosophical.

And now in a perhaps futile attempt to raise the tone, here is a photo of the donkey standing in the ditch: 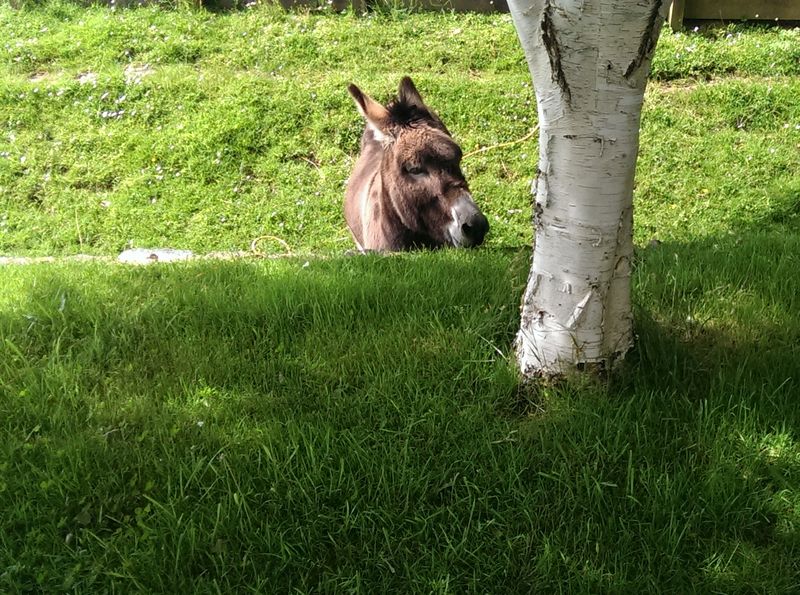 Happy Sunday to all. I hope you are well.
T