Stand by, internet, an announcement:

He is sleeping in his cot, for the second night. Hooray! He looks rather little in there (the cot, inherited from his cousins, converts to a child's bed, so it's large), and there has been some flailing and railing against the dying of the day, as predicted, but I am optimistic. We live in northerly climes, as you know, and it's still bright enough to play tennis* at this time (quarter past nine) but when the sun goes down, I think we'll be off to the races.  So to speak. The pelmet I fashioned in desperation out of cardboard is only partly keeping out the rays of sun but the light is fading fast.

Once again, I have to relearn that the things you worry about (sleepless nights training Jay to sleep in the cot, in this instance) are not the things you need to worry about. By this logic, I have decided to start worrying about everything, in order to insure a trouble-free life, starting with aardvark, and all possible disasters concerning them, and moving along the alphabet until I have covered the entire possible catalogue of disasters.

I'll report on how this works out.

In the meantime, it's getting dark. I keep making typing mistakes. It's wonderfully peaceful, though, with the sound effects CD of rain drumming on a tin roof, and the soft dolphin baby noises Jay makes in his sleep. This is one of those times where my expectations of parenthood are perfectly met - there's something so deeply satisfying about a baby sleeping peacefully in his cot - it fills the heart. It's a sweet moment.

(*Why tennis, me? A game I never play. I mean, how about polo while I am at it? Boules? I can definitely think of disasters concerning Boules, by the way.)

Unbelievable, yet true, somehow, Jay's fourteen weeks old. He's both much wiser and more complex; better at communicating his needs, at making a protest, like when you have the temerity to dress him. He has more expressions, and more decided preferences. He makes conversational noises, (Ai! Mmyah, Ooooh, etc) blows bubbles, feels fabrics (his blanket crocheted by one of the nurses' daughter in the hospital) meditatively with his fingers, tries to sit up. He enjoys his swing chair (until he doesn't anymore), and gives strangers (he loves them) big open mouth smiles and laughs. He's so much fun, now. And he's much bigger.

(Big to the point where he's nearly grown out of his crib, (although the weight limit of 25 pounds is not too close). This is something that is occupying my mind quite a bit. I am fearful. (Surprising, I know. Me! The Intrepid) How to transition to the cot? Thoughts would be most welcome. Do we just do it one night? He likes playing in there already and looking at his mobile.  And if he cries, we pick him up and try again or lean over and pat and reassure, or what? Also, we have started half-swaddling in an effort to get him used to being less compressed. Should I invest in a swaddling transition solution, like one of those suits that look like a Michelin Man? Or is that for nelly-ish parents, like we are?)

The transition to Irish formula from the US one has been not completely straightforward. "Digestive issues" (euphemism alert) have kept him up quite a few nights, the poor boy, but mostly (fingers are xxx'd) he has continued to be a good sleeper and eater. (THANK YOU, HEAVEN.) And he seems much better and in tremendously good form again this week.

Ah, another significant event: his birth mother has been in touch with the agency, looking for photos and information about his routine and well-being. We're thrilled. I wrote her a letter with a lot of photos of Jay. It's odd, writing to someone who is both a complete stranger and a family member, someone who entrusted you with her baby, someone who chose you, took the huge painful leap with you, a stranger, on the strength of your profile book, nothing more, but I tried to take this possibly single opportunity to convey our respect for her decision: her bravery, and her clearmindedness. I don't know if I did an adequate job. I can only hope so. Although we'll be writing letters to her every 3 months, I have no way of knowing if she'll ever read them again or not, and I wanted somehow to pack in all that feeling.

People on the street (a mixture of proper Salt of the Earth Ould Dubliners and young(er) blow-ins like us) have been most welcoming. Walking a baby, it transpires, is a conversation starter even better than a dog. Last week, for instance, coming back from the shop, a neighbour opposite us called me over to see the baby. Another elderly neighbour was talking to her on the doorstep. They cooed over Jay. Other neighbour: Is your husband very sallow? I'm there: Uh. I mean. Not really! Darker than me though. Jay's adopted, I point out. She mustn't have heard me, as she gave me a canny look: You're so pale. Just, isn't it funny, that?
I mean, what was she driving at? I'm surprised she didn't ask about the complexion of the postman. The cheek! Then, she did some super-rapid sign of the cross over Jay and departed, sure she'd just made the world a better place.
!!!
You can only laugh. In the few minutes we stood there, she handed out every platitude known to man to Opposite Neighbour on a recent bereavement (her daughter): Children Are Only Lent To Us, Aren't You Lucky You Still Have The Other Seven, (because it's a well known fact that the more kids you have the less you love each individual. Ah, yeah. They're completely interchangeable units. Sure haven't you plenty of back-ups?) And You'll Be Grand Sure, Cheer Up There, Time Heals All.
So perhaps not a contender for the Most Tactful Person of the Year Award.

It's Sunday. Time to go and see the folks.
Till soon, all. Hope you're well.
T

ps Hard to get a chance to draw the child when you are mostly holding him, I discovered. Must keep trying to catch him mid-nap, though.

It's been a little busy, but we're settled into Irish time. I have been meaning to update but you know how it is, happiness writes white, isn't that what they say? And I am truly happy. I still have moments of overwhelm, of course, but mostly, it, the whelm, is at a good, manageable level. I'm amazed how quickly the hotel hostage situation has receded since we've been back. Maybe necessarily? Maybe we're programmed to forget when we have to, so we can be preoccupied by new things? Maybe information that is no longer relevant for your survival is fogged over. And yet, when I hear a certain Mozart piece we used to play in the morning for Jay, I'm right back there. In Room, as we facetiously refer to it.
Now, things like transitioning off American formula onto European fill my head, and how in the US the finest paediatricians (the Mayo Clinic indeed) recommend just soap and water, cold water and refrigeration, while in Europe, you must sterilise and boil and make fresh, or you can Make Your Baby Ill, also you are a bad parent. (Total mystery. EU legislation?)
Just like everyone said, Jay's decidedly easier to look after; you can bring him to restaurants and sit outside to awkwardly eat your lunch with one hand, meet friends in the park for walks, go places in the car. He smiles at people like a politician. We're enjoying the parks around here, the garden, where the JB and he go and stare up at the sky, kicking their legs and talking. The weather has been kind.

More later, everyone, it's time to get sorted for tonight. Thanks for checking on me.
Have good weeks, all.
xx 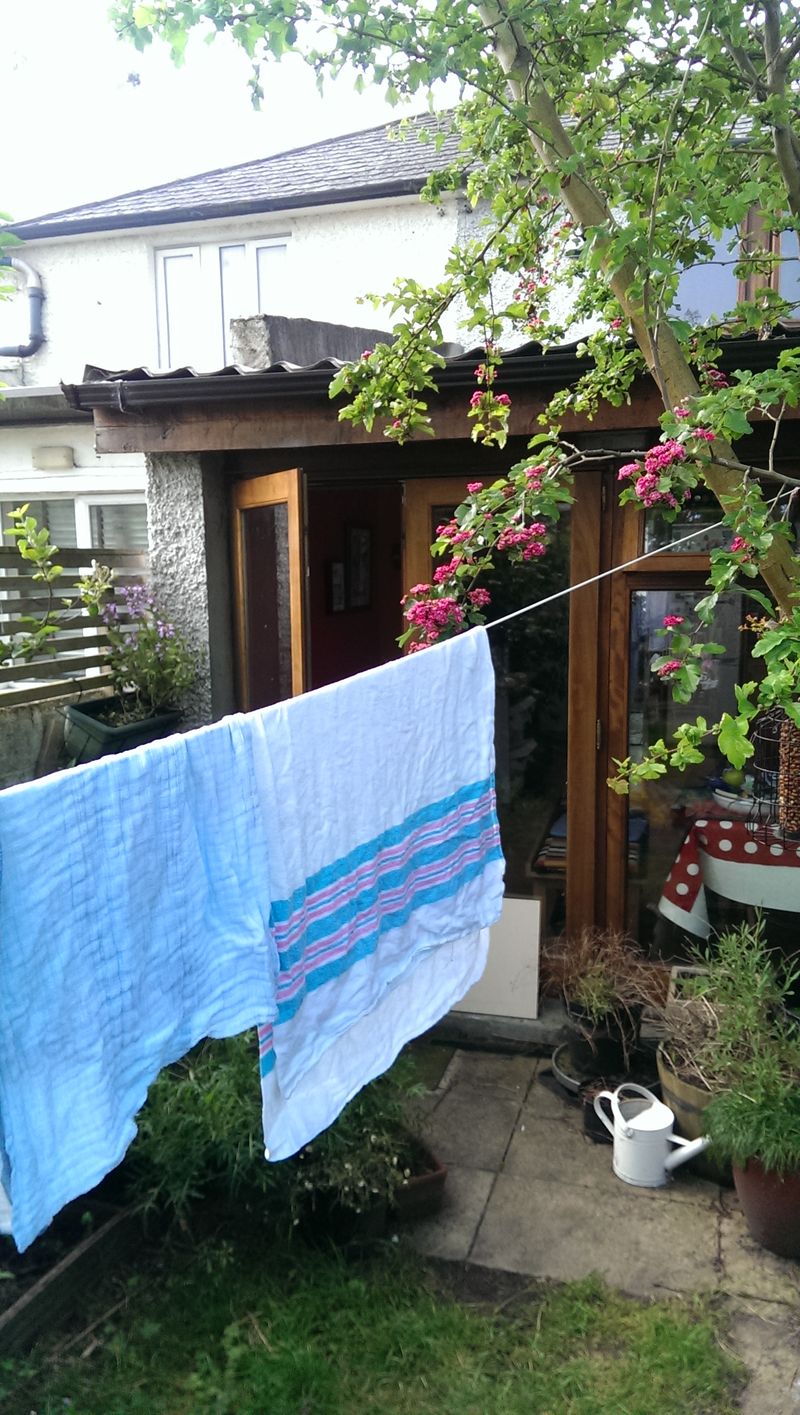