knowing what you are doing

I've been composing this post over many post 4am feed hours and I hope it somehow magically transfers efficiently from my brain on to the page, as I have 20 mins to turn this baby around. So many things to be recorded, if I could only recall them.

It's my favourite time of day. I'm sitting up in the bed, Jay is sleeping peacefully in his cot; all is orderly and calm. I can listen to my podcasts and poke around on the internet. It's cosy. I have the pleasant clarity that I know what I am doing, at night, (the mission is clear, if not always simple: to settle Jay and keep him safe, fed and comfortable) and while I don't always quite have this confidence during the day, I am less at sea than I used to be. He's getting easier; I'm getting more competent, (just like you said!). There are more things he enjoys now and can do. He likes his toys, he likes going to the supermarket (Tesco is Disneyland, as fas as he's concerned). He still doesn't do this fabled Sleeping Through The Night Thing I hear about but he's mostly more settled. (Although, we had a bad week a while ago - waking every blessed two hours for nights on end, which coincided with/caused a Bettyhead. This instilled tremendous gratitude for a mere four hourly wake-up. Four hours is fiiine, relatively.)

It also helps that I now get that a smooth graphed line at 45 degrees indicating progress is not the way it is with babies. It's more like one step forward, two back, three sideways, do the hokey cokey and turn around, two steps forward, etc etc. But gradually, gradually, in the background, the general trend is up and over time you realise, hey, it's much easier now he enjoys his bath, or look, he always nods off at this point, and ug, you remember when he used to take 20mins to drink 50ml? The days pass slowly and the weeks quickly. It's very momenty, and detailed, so much that you can lose sight of the big picture.

A pediatric physio came over the other day to assess his progress. For whatever reason, that was the day Jay decided that stranger = danger, unfortunate timing, because instead of turning his head and grasping toys offered to him he whimpered and stared suspiciously at the (perfectly nice as far as I could see) physio. Oh dear. Even so! He scored in the 30 percentile, which is not bad for a boy with a less than ideal start in life, who was not feeling cooperative. I did try to tell Physio that Jay was not normally like this, but you know how it is, you start to sound hollow pretty quickly. No, really, honestly, he normally does hold things and does turn his head to the right and does open his hands! He's usually quite jolly!  I might have to video Jay for the next one. We have to work on his tummy-time more, as apparently he will definitely be stealing cars by 15 otherwise.

The JB and I have been married for ten years. I know you're supposed to say I can't believe it, time flies. But no. It does feel like ten years to me, ten good ones, a solid decade, and we're still happily together, and it's certainly never boring, anyway. I tell you what though, parenthood does change things, doesn't it? The fact that now we need each other as opposed to choosing to be together, is quite sobering. The fact that there's no going back is, too - we are changed by being parents. It's irrevocable! (What a scary word! IRREVOCABLE. The sound alone petrifies me.) We're running a lifelong marathon. But even before and apart from that, the essential question of what marriage is meant to be escapes me. I don't really get it, I never have. I could point to my parents; I certainly would not want to replicate their relationship. In any case, it's all a mystery to me. What's supposed to happen? Am I responsible for his happiness? No? Yes? Don't get it. Must work on this. Must read books or something. No, first I must lie down and listen to The Archers. Maybe they know what marriage is.

Well, time's up - in fact a day has gone by and I now must depart for a gin and cake housewarming party at the place of a woman from my choir. (Surely the most middle-aged sentence I ever wrote. )
Hope you're all well. Post, anyone?
T 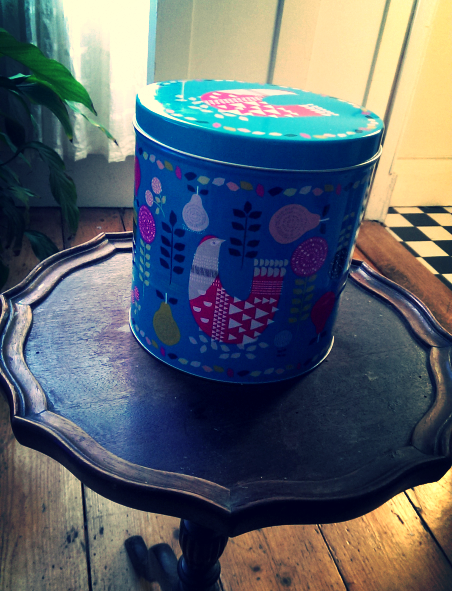 (My mother gave us this tin of biscuits for our anniversary. 10 years is tin, I believe. The biscuits didn't last long.)