I have more to say about Jay, of course, and what a says is true: I should write it down now before I forget it all. Even now, certain things have been lost in time - like when did we stop burping him? When did he stop making the dinosaur noises? File not found. Our letters to his birth mother do document some of this, it's true. We have those, and we've started his Life Book, with all the photos and mementoes from the hospital. These will always have the power to make me teary; I can't imagine a day when I get blasé about this one, for instance, which was stuck over his cot, (put there by a volunteer, I think): 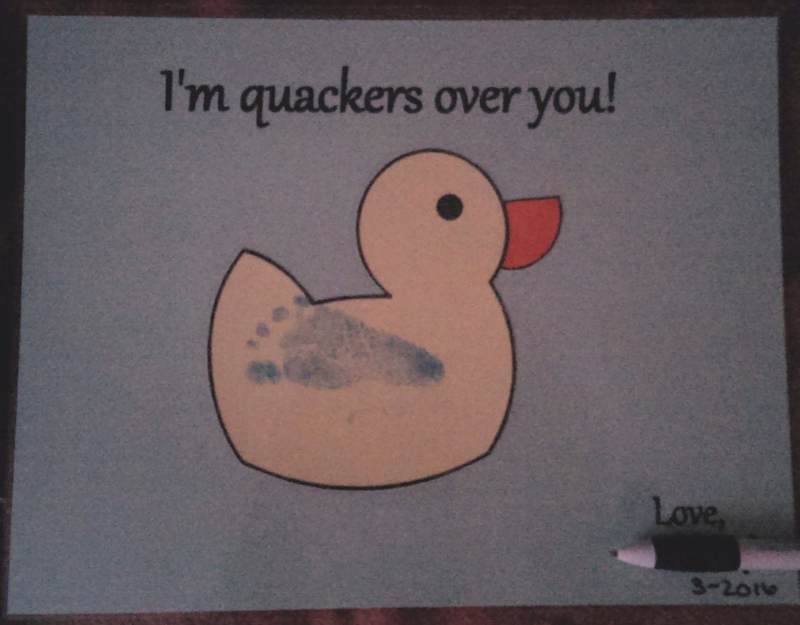 The physio gave him a glowing report this week, according to which he is doing very well. He's creeping, he's grasping, he's rolling over: all things desirable in a nine-month old. (A creeping, grasping adult being a different matter.) He's following people's gazes, he's "talking". He's lively and responsive. The creeping mostly works in a backwards direction, mind you. The other day I turned back to him to find he'd backed his lower half under the bed, and was looking up at me in confusion. Putting his sleeves is like birthing a breech chihuahua pup, trying to straighten his thumb out and pull it through while he complains loudly, arg. When his hand emerges, he rotates it carefully in front of his face, as if to check it's all still there.

We said goodbye to Beautiful Tony, our social worker, by the way. He's gone to work in the Probation Office. [Twangy briefly considers turning to crime as her best bet of seeing BT again.] Fare thee well, Beautiful Tony! I sincerely hope you never read this. (I would be deeply morto.) We believed it would be our last social worker visit, but as it turned out, our final final court date to finalise our final adoption of Jay finally slipped until mid-February, which means we must have another visit in January. Of course the very last bit of the process had to be loooong and draaaawwwn out, of course, but hey ho. I was waiting for the official date to announce Jay's existence to the old friends we don't see often, (due to jinxy feelings) but I think I'll start emailing people.

There's more of course but it's Christmas Day and there's no time. We are off to see my family later and breakfast has to be thrown around the kitchen first. I hope you're all well, everyone reading this, and have a lovely holiday (or 25th December, whatever that means to you).
Be good to yourselves.
Love from Ireland
T

It's a gloomy ass day here in Northeastern Land of Crazy People, but your joke about grasping, creeping adults made me snort. So thank you. And OH, that footprint. I concur--one does not become blasé about those early objects. These days, I get to share them with the weirdly grown up creatures my children have become.

Okay...February. That is absurd, but hey, Ireland. Yes, I say email the people. Don't let the officials control you.

the end of last year was crazy. i fell off the web and missed your posts, for which i apologise.
The other day a 12 month old girl visited our canal house. My memory, it is shot. LIttle S must have crawled in about the same way 3 years ago. But I cannot remember the creeping. or the rolling. not at all. I DO remember her first steps, holding on tightly to a big wooden toy, not relalising she was carrying it. (and it not supporting her!)
Lovely to read from you in the new year, I will try to do my best and write something too.
hugs from Amsterdam,
VV

My girl was expert at wedging herself under the furniture - sometimes she'd back herself up so far that she'd whack her head on things. But I was fortunate that she didn't fight me on clothes much. However, she is now 10 (how did that happen?) and decided that the most appropriate place to take her clothes off is in the laundry/mud room...halfway across the house from her bathroom/bedroom/any normal place where normal people normally undress. We have a streaker. So...maybe fighting with a baby over clothes means you won't have to do so later?

January will speed right by and your finalization will be here before you know it!

HAHAH! I love the streaking. How fantastic, a.
^^