Time marches along, does it not? I am a bit fried, what with being all busy and so on. And so, I have picked a fragrant nosegay of recent events to tell you about. Let us not expect any cohesion, logic, or sense in the following but proceed bravely nonetheless:

(Oh yes, Andie wanted to know about the process. This 6 part adoption preparation course is a mandatory part of the approval process in Ireland. After this, we'll have our home assessments with the social worker, and should be given our declaration after that, presuming we don't turn out to be KRAY-zee or prove to keep a family of electric eels in the bath. Onward then to an agency that deals with our country of choice. Not sure as of yet which it will be. Someone mentioned the requirement to spend around a month abroad (in the case of Mexico) getting to know your child. Good idea, eh? And what an adventure. I used to speak reasonably okay-ish Spanish, until Italian took over and turned the Spanish into something akin to a bastardised Argentinian dialect. In the landfill that is my mind, a sludgey layer of decomposing Italian covers the rusty old corrugated iron sheet that is my Spanish. But I feel confident with a bit of effort and the vigorous application of language tapes 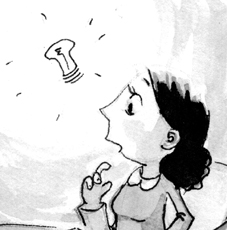 (Oh. Lightbulb! I suppose they have Spanish MP3s now, the young people. ) it can be dusted off.

It's been a couple of tough days, even apart from the icy wind and rain. Because, for all that I kept dreaming about being pregnant (ha, subconscious, very funny) and spending hours at night wakeful believing I was and a few more seized by the irrational convinction that yes, I was, but it was ectopic (Thanks, overactive imagination. Good one) I know I am not in fact up any pole. Rather I am left flatfootedly on the ground, pole-less, bun-less, spout-less, looking for a graceful way to go through the tests I now have to face. I've been through this before of course. It has a familiar feel to it. The whole cycle back from grief and disappointment to resignation and finally to hope again is getting faster, if no easier. Here I am, happy enough, back in front of the telly, where yesterday morning I was like a sad robot at my computer. And meantime:
The new President of the US is up there talking bravely and eloquently about what must now be done. The vast crowd is whooping and clapping. He looks small - just one of them, and it makes me concerned he'll be alright. That he can do it.
We have to believe that it is possible, that change is coming. There is no choice but to believe.

So. I have put it off for as long as possible, but now, we must enter the tricky territory of Irish politics.
For last week I encountered a species I had hoped was extinct. The Orange-Breasted Unconstructed Loy*list from Ulster, or OBULU, as I shall refer to him, he of the peculiarly narrow-skull and the remarkably short sight. In the space of the 15 mins I was in his company, he managed to nail his colours decisively to the mast at least 3 times, and be in no doubt, those colours were UK red, white and blue.
I, on the other hand, instinctively and cravenly donned the Mask of Neutrality. Like all Irish people, I have been indoctrinated since birth in these subtleties - and believe me, I was as impassive as a stone.
(The Mask of Neutrality reminds me of that part of the novel 1984, where the protagonist talks about how it is safest when in front of the Big Brother cameras to adopt an expression of mild contentment, betraying no extremes of happiness or sadness).
And so:
Twangy, signing docket: And today's date is..?
OBULU: Aye, it's the 11th, (and, somewhat extraneously, some would think) I know that because tomorrow is the 12th.
Twangy, just aware enough that the 12th is the day a certain Northern Irish community go marching around in a somewouldsay jingoistic manner, instantly assumes the aforementioned Mask of Neutrality from under which no emotion can be perceived, and makes no response, betraying no extremes of happiness or sadness.

A few minutes later, we are discussing the bargain prices offered by his company.
OBULU (words to the effect of): oh aye, mai company is great. We like to make You Boys down here look bad!
And then, as Twangy remarks that she is happy that they are disposing of the packing that comes with the mattress and bed-head (aside: btw, bed-heads are a shocking, unbelievable price! much more than the mattress - definitely gap in market there, for anyone with a staple gun, some yards of faux suede, and the will to make waves in the bedding market)
OBULU, "joking": Well what you're dealing with here, is a Northern Irish organisation!
Twangy (felt like "joking" back): Ha ha, as long as it's not a PARAMILIT*RY ONE!

But I didn't. To make such a comment would be in clear contravention of the rules of the Mask, and doing that is not for the weak of courage or conviction. (Like me, it goes without saying).
The episode prompted me to think in a depressed manner about the acquired and unnatural sensitivity we have to these subtleties, learned from fear, over years of the Troubles; and about the duplicity that growing up in that situation fosters in you. One voice, oily and diplomatic, is the one you use in the world, out loud, another is the rebellious and angry one you use inside your own head. It made us used to thinking simultaneously on two tracks, it made us like a resentful child of an alcoholic parent, it stunted our growth, in the end.
And the sad thing is, it is obviously still so, for some of us.

and lo! a ray of light

penetrated the mid-winter Dublin gloom and lit upon : 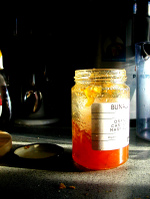 a jar of marmalade. What can this mean?

What, what? Oh jar of marmalade, what?

humm. where was I?

Yes, I should really try to keep my drivel linked up in a semblance of order. In a chain of drivel, if you will.

Well. What goes on?
Yes, on Saturday I went on a march with L, with the organisation St*p Climate Cha*s. It helped having L there, because we could slip off for coffee and for a break from the rain, and I must say I enjoyed it and didn't at all find it the uncomfortable experience I feared. The best bit was being able to walk right down the middle of Dame St, through Westmoreland St onto the quay side to Custom House and the Dept of the Environment, accompanied by guards all the way, to the thrilling beat of the drums.

After, the talks were quite interesting, but the whole thing degenerated into a bit of a mess, as political groups tried to co-opt the proceedings (like those (possibly witchy?) T*ra Hill types who grabbed the mic from Eam*nn Ryan and shouted into it:
Words are cheap you green parasite!
What did she mean, do you suppose? that he was a greenfly? an aphid?)The guy from St*p Climate Cha*s was adept though in calming them, saying they all had a story to tell, but that we were all in the climate chaos together (in the most literal way).
I got on the LUAS then, dripping gently, and went to see Spike. Who wasn't too thrilled by the idea of being minded by Bobby. (FYI, in case you need it, the word "no" is broken, now, Spike overused so much.)
He sobbed and hiccupped sadly when he realised that Daddy was leaving. And was only consoled finally by the promise of watching a certain claymation sheep, called Sean. The JB came over and lo! at the presence of a man, Spike became all animated and happy, again. And they threw balls at each other for a while until Mummy came home and reassured me that he does that with her too.

I am writing this with an eye trained keenly on my email, waiting for news from M, head consultant at That Company. That afore-mentioned company and I have been doing battle today, in the politest possible way. I had done 2 concepts last week in a day and a half, as illustrated below, and yes, these were good, but had I not come up with any interactivity? and so, okay, I did some interactive ones, and yes, they were fine, but the USP of the brand hadn't been shown, so could I..? So I did. But wait.. they needed all these in PHOTO FORM, and will they work in photo?
NO. They won't. That was not in the brief. I am an animator, remember? not a photostory editor.
I'd have to rework all the concepts. And they'd have to pay for the work already done. Oh, how much would it be? a day and a half at our standard rate, 480 euro. YES.
But that would exceed their entire budget which is 450 for the entire job! Could I "relook" at it?
So I relooked. And pushed it around a bit until it was 540. So finally after much damage to me nerves, it was decided, I should go ahead and rework, (sigh, this is disheartening even to write). Oh! and make it before 4PM.
And verily I relooked and reworked and reworked and hardly had a break all day and thought, it is impossible to make a living like this. 4 days work done, and I haven't even got the concept signed off.

And now it is 5PM, no email from Head Consultant. And I am off. It's a apple pie emergency type of day. JB, I really hope you have a pie on your person when you come home.