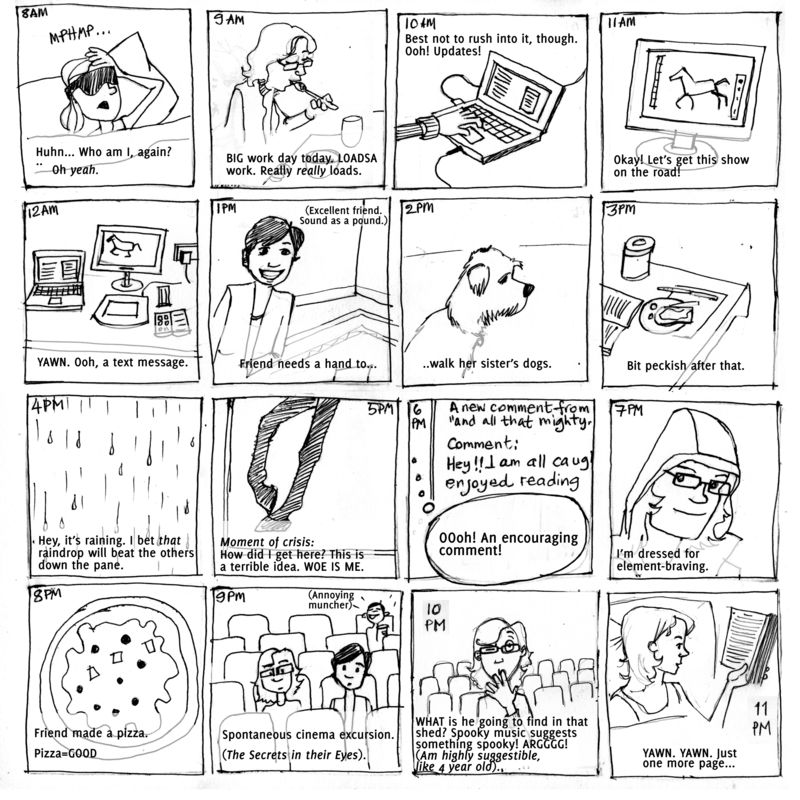 (As inspired by the brill Lucy Knisley).

Here's the plot outline from IMDB, (types the lazy e): A look at what goes on backstage during the last broadcast of America's most celebrated radio show, where singing cowboys Dusty and Lefty, a country music siren, and a host of others hold court
Funnily enough no-one has attempted to summarise the plot. [ Plot Synopsis: This plot synopsis is empty. Add a synopsis] Probably because this would be like gathering up a load of live worms and trying to put them into a jar - if a lot less slimey and unpleasant. Some very appealing country singing worms.
I used to listen to PHC on NPR on Sundays when I lived in NJ USA for a few years. I had stumbled upon it and it had the charm of being an accidental discovery of mine. I used to love the Lake Wobigon section. It didn't even matter that it was a world quite alien to me; in a way that was part of the attraction. But even for one as well-disposed as I this film was not much more than a pleasant meander through a world which might have been better left imagined. It did have some charming moments though, especially with the Meryl Streep, Lily Tomlin, Lindsay Lohan characters, the twee country singer sisters. (It was strange to see Garrison Keillor somehow. His stage presence, his physicality was oddly dissonant with his radio one, in a way that was almost embarassing to me. Although I still think he's great).
A wander through another gentle but sometimes dark world.

I have a bit of a pile of reviews to do so I'll make this snappy: It was like a feature-length version of the TV series, with better animation the better to show off the full screen. So if you like the familiarity of the 5-person setup and the that particular Simpson brand of ironic celebration of stupidity, you are away in a hack. (Which I do.)
I like that there is a heart at the centre of the stories, that there's hope. It means that the scepticism in the face of the world is never mean, and that in the end love and forgiveness triumph unashamedly.

(This is not well written but I am making myself do it for writing/remembering practice. Bots, you've been warned).

The story spans the time between Marie Antoinette's forced move as a teenager to France to marry Louis XIV, and the eventual rebellion against the court on behalf of the republique. Sofia Coppola went to great lengths to render a pop version of the extraordinary opulence of the court of Versailles and the lingering shots of those lush colours in the palace and nature really work well, I think. They work also as a backdrop for the constant whispering campaign (expressed in unscripted voices fading in and out just allowing us to pick out phrases) that plagues poor old MA's life, so that everywhere is the impression of claustrophobic crowds of people watching - apparently so polite and proper but in reality so judgemental and unkind. This chorus resonates in the media and it is hard not to feel sorry for the hapless MA, who never chose any of this, and is moved about and used for political purposes, whose freedom is lost, and whose home, however beautiful, is not much more than a prison - in the end it's a sympathetic portrayal of her.

A very professional and seamlessly put together production of the play in the soon to be demolished Andr*w's Lane Theatre.
It's true that the play does not offer a totally satisfactory ending, or a neat tying-up or climax of the plot, but it reflects the poignant messiness and regret of real life, and I liked the way the play self-reflects - here's a play about a 20 correspondence between two people, written by one of those two, and self-references its own story in the guise of the book Helene Hanff wrote about it. I find that mechanism intriguing and pointed. It seems to me to be about art and life, although that might be to overegg it.
It's certainly about the love of books and sharing and friendship  - set in the period after WWII, it's steeped in nostalgia for a time when there was such a thing as personal service and credit in shops, and manners and time and care were taken.

Harry Potter and the Order of the Phoenix

Went to this yesterday with the (slightly under protest) JB

Directed by David Yates, this is the story of the conspiracy against HP on behalf of the Ministry - they deny what happened with Lord Volimort and plant Professor Dolores Umbridge in the school as a way of controlling the rebellious goings-on there. Harry gets together an army and trains them in a room, so they can go to battle with the Dark Arts .. Good story, great effects, wonderful imagination - a fascinating, dramatic and convincing dark world which provide the backdrop against which friendship and love finally triumph. There is sadness, grief and real loss (Sirius dies) which provide a real contrast - stakes are high, it is, finally, a matter of life and death, in the endlessly compelling battle of good and evil.

Very slick and well-worked out, and a refreshingly intelligent take on the thriller format from the French. I felt I missed a *few* cues though, between the ever-racing pace, blur of details, twists, dropped information and the subtitles - but enjoyed it. Francois Cluzet in the main role was suitably edgy and nervous, super subtley played, but with speedy action.. it'd be worth a re-watch for the satisfaction of seeing a really well-turned plot revolving neatly like a well-oiled machine and in the end springing open to reveal something you really don't expect.

When a couple visit a lake for a swim on their anniversary the wife is killed. Now, 8 years on the serial killer who had taken the blame is proved not to be the culprit and the focus shines on Alexandre, the husband. The camera follows him closely as he receives email and webcam messages that suggest to him his wife is still alive - and stays with him through the fast ratatat of action that ensues.

The director, Olivier Dahan, made use of the format you see often nowadays for biography, starting at the very end of a life and then cutting back to the beginning. This pattern shuttles back and forth along the length of a life, in ever decreasing distances, until the two parts close in at that final collapse on stage. The implicit message being: this is what she was like and this is why, where and what she came from. And what a life it was: carnivalesque, baroque, dark and tragic, the stuff of a made for TV movie. It was like Danielle Steele crossed with Marilyn Mans*n - she was born to a down-and-out lush who is scraping a living singing for a few centimes on the streets of Paris, when her father comes and takes her away and leaves her in a brothel (which, strangely, is not the worst part of her life, at all) where she loses her sight for a time. He comes back and takes her on the road - he's a contortionist, and she learns to sing alongside him to make some money. And then on to music halls, and her agent getting murdered by the mob, and being trained by another minder, and making it, her rise to fame, touring in the States and falling in love with a married man, who then dies in a plane crash, and so to drug dependency, and the rapid decline in her health. A catalogue of a life intensely lived, but in such a succession of drama, at such a pace.
What interests me though about biography is what is left out, what is edited out, and what decisions are made about accuracy to historical detail. With no experience of Piaf as a performer, I had no other version to check it against - sometimes I thought the acting was a bit large, but I don't know,  maybe Piaf was truly that way. It had to stand on its own.. which it did, finally - the final scene was good, she was singing that song that is so associated with her, that anthem, that statement, that olden day "I will survive", now so out of style and yet with its own power, for all time:
Non! Rien de rien.

And then, sudden blackness. The End.

JB and e went to see Julius Caesar in the Abbey. Enjoyed it.. some of those speeches really brought me back to Inter Cert readings with Mr Hamill. And being in school after dark for events and how thrilling that would seem, seeing the home life of the boarders and running around the corridors excitedly, the school seeming so different away, transformed from its usual mundane purpose. Mr Traenor's choir at Christmas and the carols - his arrangement of Emmanuel. Benetton jumpers and not having to wear uniforms. And the debating team..

Julius Sneezer. The production was really professional and solid.
(JB gave e a fantastic recorder for St V. Am thrilled with it, will use it so much. So MUCH better than roses. I made him a cake. Unequal? and some tickets and a card which is very sweet I think you'll agree. Attaching it here. Must be said that JB was a bit disturbed by it

you'll have to double click to see the whole effect, believe me it's quite shocking).

I have had 3 days at home working on my project, reading stories, making monoprints and trying to put them together. Am pushing along slowly. I am realising now I tend to get a little bored and want the thrill of seeing things finished, the excitement of the new idea.. as opposed to the work, but, that it doesn't really matter as long as I plug along calmly. today I am writing up a part of Ber's talk. He really has a good radio voice. The depth of things is amazing when you look back on them. He describes things so well, it's only when you look back you can see how many layers of observation and recollection he puts into it.

No news on survey yet, apparently it takes 4-5 working days to type it up. Puff!

We went to the Screensh*w last night for our course. Skimmed around in double quick time, said hello, and left for a salad in the ifi. It was good to unveil the Johnny though.

Pasta possibly turning to glue now so must close.